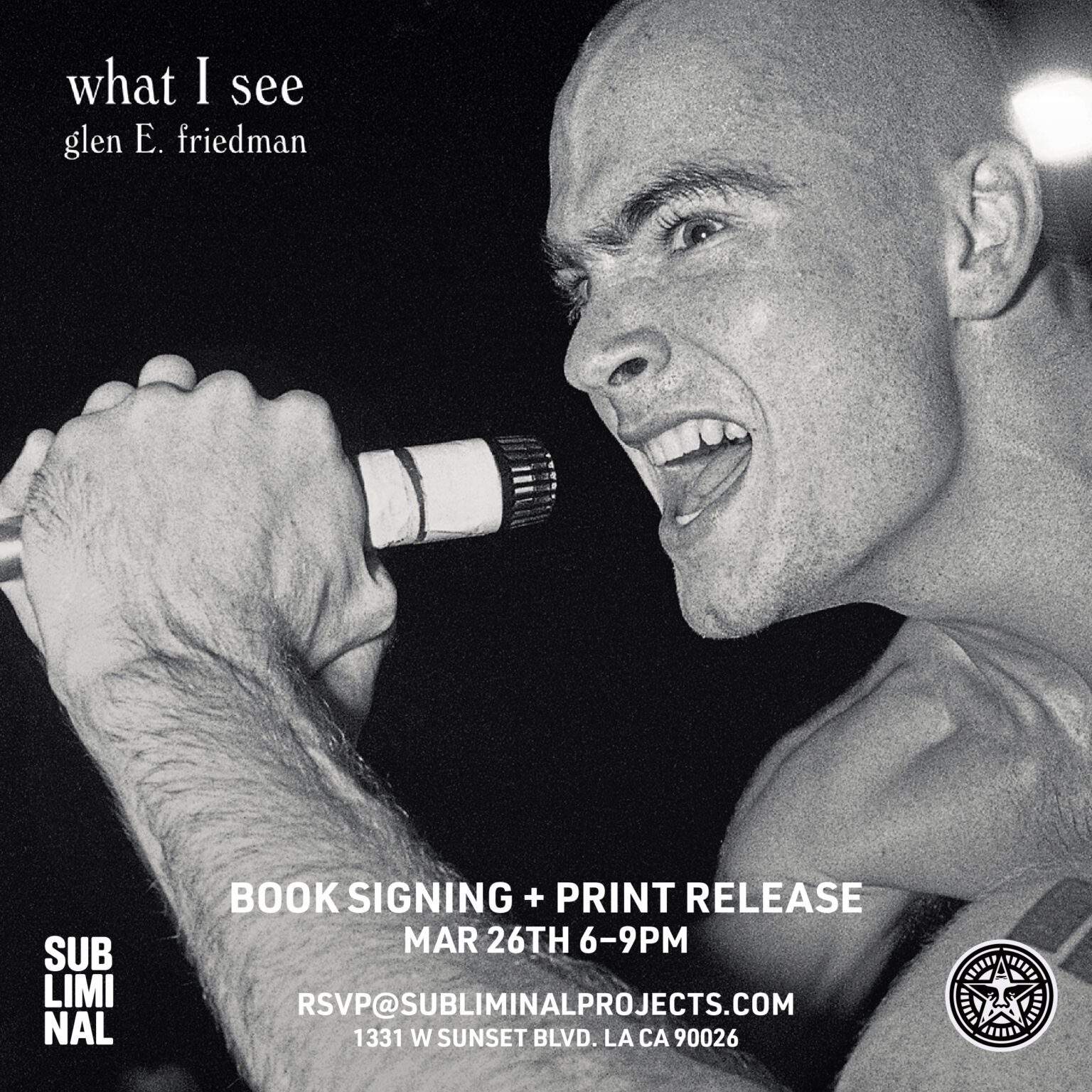 What I See: The Black Flag Photographs of Glen E. Friedman Book Signing

When you think of the ultimate representation of photos of one of your favorite bands, you imagine photography with a rare insider’s point of view with special backstage access that only a friend of the band can obtain and use to capture the inherent magic of moments that changed the face of music as we know it. When these photographs are meticulously presented alongside the thoughts of a creator of the sounds that would come to define punk rock, you have something absolutely captivating as well as one-of-a-kind collectible. When the icons of a movement combine efforts on projects like this one, it can result in an undeniable force with its power and reach, which is assuredly the result with “What I See”. When these gems are shared, it’s like finding hidden treasure, and will surely inspire generations to come. Indulge, invest, incite, rise above and Immerse yourself in the raw inspiration of “WHAT I SEE: THE BLACK FLAG PHOTOGRAPHS OF GLEN E. FRIEDMAN”.

Thanks to a very special sneak-preview of this new book, “WHAT I SEE”, that Glen graciously offered us at Juice Magazine HQ in Venice a few months ago, we can guarantee that this new GEF tome is well worth the wait. Now we are stoked to share the news that it’s time to celebrate with a proper launch event and signing party for this unique masterpiece at Subliminal Projects on Saturday, March 26, 2022. RSVP now at rsvp@subliminalprojects.com to reserve your ticket to ride.

As Subliminal Projects describes it, “WHAT I SEE: THE BLACK FLAG PHOTOGRAPHS OF GLEN E. FRIEDMAN” is an incredible compilation of all of Friedman’s most iconic and recognizable images of this seminal punk band, including over 80% of which have never been published before, made during those phenomenal peak years of 1980-1983 in the group’s history.

“WHAT I SEE” includes a foreword by Chuck Dukowski, a cofounder and bass player of Black Flag. Friedman’s own introduction to the book takes readers through his journey with the group, from the very first time he heard their music, to his perspectives on the music of the era, to the how, why, and what Black Flag was doing at the time. His words provide additional context to the imagery, explaining what drove him to create his art alongside the band.

From the streets around Black Flag’s single-room home base/office, rehearsing for their first album, handing out flyers, wheat-pasting posters, driving for hours to a show and returning the same night, house parties, clubs, to the big stage and the beach, Glen E. Friedman was there with his heart, soul, and most importantly his camera. In What I See, he shares with us and inspires us with these images that were made over an incredibly volatile four-year time span.

The official book release of “WHAT I SEE: THE BLACK FLAG PHOTOGRAPHS OF GLEN E. FRIEDMAN” is April 5th, 2022, but you can buy direct and get it early! Signed or 25% off from Akashic Books
www.akashicbooks.com/catalog/blackflagbook/

In the brilliant words of Shepard Fairey, “The band Black Flag probably made the biggest impact on me in terms of the intensity of their music, lyrics, art, and DIY ethos. Black Flag scared me but also transfixed me. Listening to the Let Them Eat Jellybeans comp as a 13-year-old featured Black Flag’s “Police Story,” with its anti-authority hostility, electrified every hair on my body. The lyrics “This fuckin’ city is run by pigs… they take the rights away from all the kids” hit home with me because the cops were already hassling me for skateboarding. “Police Story” made me want more music by Black Flag, and a friend loaned me their Damaged album. Damaged is a perfect slab of condensed anger, but there is a ton of other great Black Flag material. I’ve collaborated with my friend Glen E. Friedman on many projects. I’m especially excited about these “Your Rules My War” prints coinciding with his latest book release, “What I See,” which features an epic collection of the most iconic photographs ever made of Black Flag and tons of never-before-seen photos. These prints are based on Glen’s fisheye angles from Black Flag’s show at the Los Angeles Federal Building on July 4, 1983, with Chuck Dukowski and Henry Rollins. Notably, it is the last show original bassist Chuck Dukowski played with Black Flag and in fact the last time Glen shot them live. The prints are all signed by Henry, Chuck, Glen, and me. Glen will be here at my gallery, Subliminal Projects, on March 26 from 6-9 pm, releasing and signing his books. The prints will be available first only at the book signing. Hope to see you there!”- Shepard Fairey

“Your Rules My War” (Two Colorways: Blue & Red). 24 x 18 inches. Screenprint on thick cream Speckletone paper. Original Illustration based on photographs by Glen E. Friedman. Signed by Shepard Fairey, Glen E. Friedman, Henry Rollins, and Chuck Dukowski. Numbered edition of 350 per colorway. A limited amount of matching numbered sets will be available for $180. Blue & Red sold separately for $90. Exclusively available in person on Saturday, March 26th for the event at Subliminal Projects from 6 PM – 9 PM PST. Max order: 1 of each colorway per customer/household.⁣ ALL SALES FINAL.

Also for anyone who would like to get a limited edition print from GEF that supports his upcoming exhibitions, you can get all the info here: www.wax-face.com/glenefriedman