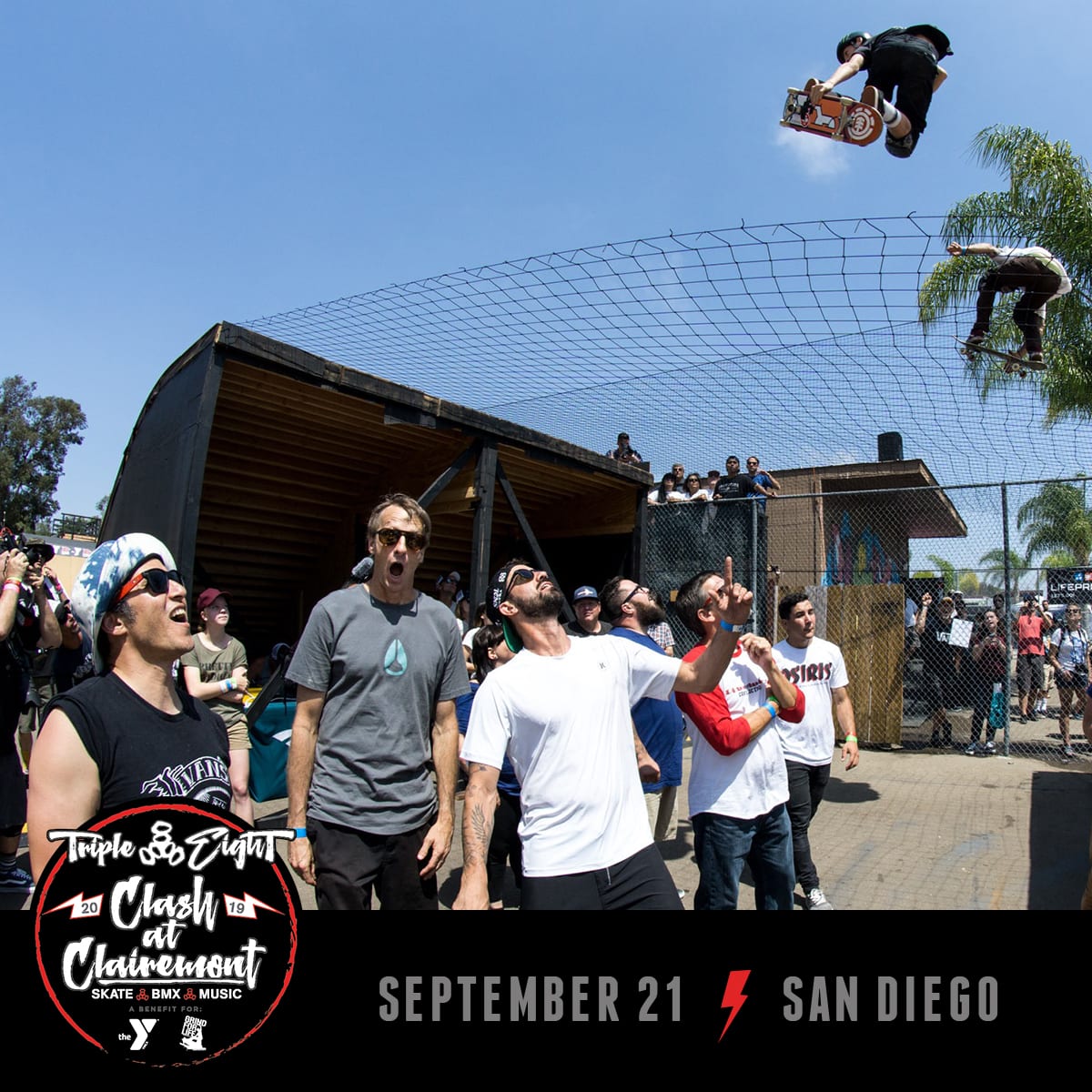 Mark your calendars for Sept 21st and get on down to San Diego to join in the fun and fundraising at the Triple Eight Clash at Clairemont, which will present “jam-style format” Vert, Bowl, Street and Skatercross® skateboard racing events to benefit the YMCA and cancer patients through the efforts of Grind For Life.

This the 12th edition of this Clash at Clairemont annual event and this year it will feature a poolside concert by Black Flag, autograph signings with pro skateboarders and BMX riders, a vendor village, a variety of food and drinks and an opportunity to do the right thing and contribute to a good cause.

The action sport party with a purpose will be held on Saturday, September 21st at the YMCA’s Krause Family Skate and Bike Park in Clairemont.

In its 12th year, the one-day event brings the biggest names in skateboarding and BMX together in a festival atmosphere at one of the premier skateparks in the world – all while raising funds and awareness to help crush cancer.

“This is a great event with a long history that we are excited to be a part of.  Our goal is to make it one of the premier live events in action sports.” said Bobby Oppenheim, Triple Eight President.  “It’s a perfect formula: jam-style formats that get the best riders together at the ideal skatepark–which is right in their backyard.  Fans and families get to interact with the athletes, listen to some great tunes, and it’s all for a good cause.”

“Triple Eight is excited to partner on this signature event—and look for ways to extend it with promotions around the country throughout the year.”  said Yana Farrally-Plourde, Triple Eight Brand Director. “We want to spread the stoke and the benefits of Clash, and bring more attention to the big event at Clairemont.”

“When it comes to helping people with cancer, we’ll take all the support we can get, but better still that it comes from Triple Eight, a brand that has its roots in skateboarding since 1995,” said professional skateboarder and event founder Andy Macdonald. “We couldn’t be more proud to make Triple Eight literally part of our name and bring you ‘Triple Eight Clash at Clairemont’. Bigger. Faster. Louder!”

Triple Eight Clash at Clairemont is a full day of action that benefits the YMCA’s skatepark as well as Grind for Life, a cancer charity founded by two-time survivor and lifelong skateboarder Mike Rogers. Grind for Life provides financial assistance for cancer patients and their families when traveling for treatment.

Skatercross® Skateboard Racing returns to the world’s first and only track in 2019. The vision of Macdonald, a 23-time X Games medalist, Skatercross® features multiple riders racing each other side-by-side on a course full of jumps, berms, gaps, and hurdles with ample opportunities for passing and crashing.

Fans will have the chance to mingle with their favorite skaters and BMX riders during a huge autograph session.

Live music has always been a huge part of the event – and this year the iconic punk band Black Flag will be rocking pool-side with founder Greg Ginn and fronted by skateboard legend Mike Vallely.

Triple Eight Clash at Clairemont will offer up various food and drink options as well as a large vendor village.

About Clash at Clairemont
Clash at Clairemont began in 2007 as a cooperative effort between professional skateboarder Andy Macdonald, the YMCA, Grind for Life, and several industry sponsors. Now in its 12th year, Clash at Clairemont is a family-friendly fundraiser supporting the YMCA’s Krause Family Skate and Bike Park in San Diego and the Grind for Life cancer charity. The annual event features the biggest names in skateboarding and BMX uniting to help crush cancer. Clash at Clairemont also includes live music, food, and a vendor village. It is considered Southern California’s Premier Action Sports Fundraising Celebration.

Triple Eight was born on the streets of New York City.  Back in 1995, we hit the pavement—literally—with our first helmet, and have been developing tough, stylish protective gear for the action sports industry ever since. Our team is continuously dreaming up new products, incorporating new technology, and maintaining our hard-earned reputation for skate, bike, snow, water and derby gear of the highest quality and craftsmanship. After all, we’re not only making the products, we’re using them too.

About the YMCA of San Diego County
The YMCA of San Diego County is dedicated to improving the quality of human life and to helping all people realize their fullest potential through development of the spirit, mind and body. It is the second largest Y in the nation, serving more than 400,000 San Diego County residents and employing more than 5,000 people. Through a variety of programs and services focused on youth development, healthy living and social responsibility, the Y unites men, women and children – regardless of age, income or background – to nurture the potential of children and teens, improve the nation’s health and well-being, and provide opportunities to give back and support neighbors. The YMCA’s Krause Family Skate and Bike Park strives to provide a fun and positive environment for children and adults of all ages and abilities, while also serving as a training ground for professional athletes.

About Grind for Life
Founded in 2004 by two-time cancer survivor and lifelong skateboarder Mike Rogers, Grind for Life provides financial assistance to cancer patients and their families when traveling long distances to doctors and hospitals. GFL educates and inspires patients and their families concerning cancer survival and recovery. Those who qualify may request assistance for travel and lodging expenses as well as meal and personal needs.