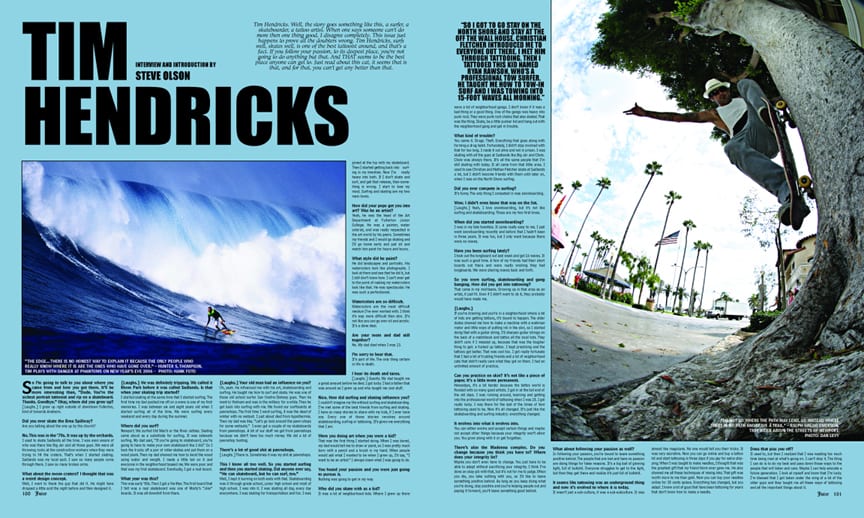 Tim Hendricks. Well, the story goes something like this, a surfer, a skateboarder, a tattoo artist. When one says someone can’t do more then one thing good, I disagree completely. This issue just happens to prove all the doubters wrong. Tim Hendricks, surfs well, skates well, is one of the best tattooist around, and that’s a fact. If you follow your passion, to its deepest place, you’re not going to do anything but that. And THAT seems to be the best place anyone can get to. Just read about this cat, it seems that is that, and for that, you can’t get any better than that.

“So I got to go stay on the North Shore and stay at the Off the Wall house. Christian Fletcher introduced me to everyone out there. I met him through tattooing. Then I tattooed this kid named Ryan Rawson, who’s a professional tow surfer. He taught me how to tow-in surf and I was towing into 15-foot waves all morning.”

So I’m going to talk to you about where you came from and how you got there. It’ll be more interesting than, ‘Dude. You’re the sickest portrait tattooist and rip on a skateboard. Thanks. Goodbye.’ Okay, where did you grow up?
[Laughs.] I grew up right outside of downtown Fullerton, kind of towards Anaheim.

Did you ever skate the Brea Spillway?
Are you talking about the one up by the church?

No.This was in the ’70s. It was up by the orchards.
I used to skate Sadlands all the time. I was even aware of who was there like Big Jer and all those guys. We were all throwing rocks at the construction workers when they were trying to fill the craters. That’s when I started skating. Sadlands was my local spot. I saw so many people come through there. I saw so many broken arms.

What about the moon craters? I thought that was a weird design concept.
Well, I want to thank the guy that did it. He might have dropped a little acid the night before and then designed it.

[Laughs.] He was definitely tripping. We called it Moon Park before it was called Sadlands. Is that when your skating trip started?
I started skating at the same time that I started surfing. The first time my dad pushed me off on a wave is one of my first memories. I was between six and eight years old when I started surfing all of the time. We were surfing every weekend and every day during the summer.

Where did you surf?
Newport. We surfed Old Man’s or the River Jetties. Skating came about as a substitute for surfing. It was sidewalk surfing. My dad said, ‘If you’re going to skateboard, you’re going to have to make your own skateboard like I did.’ So I took the trucks off a pair of roller-skates and put them on a wood plank. Then my dad showed me how to bend the wood using water and weight. I made a little tail on it and everyone in the neighborhood teased me. We were poor and that was my first skateboard. Eventually, I got a real board.

What year was this?
This was early ’80s. Then I got a Variflex. The first board that I felt was a real skateboard was one of Marty’s ‘Jinx’ boards. It was all-downhill from there.

[Laughs.] Your old man had an influence on you?
Oh, yeah. He influenced me with his art, skateboarding and surfing. He taught me how to surf and skate. He was one of those old school surfer San Onofre/Doheny guys. Then he went to Vietnam and was in the military for a while. Then he got back into surfing with me. We found our surfboards at pawnshops. The first time I went surfing, it was the dead of winter with no wetsuit. I just about died from hypothermia. Then my dad was like, ‘Let’s go look around the pawn shops for some wetsuits.’ I even got a couple of my skateboards from pawnshops. A lot of our stuff we got from pawnshops
because we didn’t have too much money. We did a lot of pawnshop hunting.

This I know all too well. So you started surfing and then you started skating. Did anyone ever say, ‘He can skateboard, but he can surf, too.’
Well, I kept it burning on both ends with that. Skateboarding was it through grade school, junior high school and most of high school. I was into it. I was skating all day, every day everywhere. I was skating for transportation and fun. I was joined at the hip with my skateboard. Then I started getting back into surfing in my twenties. Now I’m really heavy into both. If I don’t skate and surf, and get that release, than something is wrong. I start to lose my mind. Surfing and skating are my two main loves.

How did your pops get you into art? Was he an artist?
Yeah, he was the head of the Art Department at Fullerton Junior College. He was a painter, water colorist, and was really respected in the art world by his peers. Sometimes my friends and I would go skating and I’d go home early and just sit and watch him paint for hours and hours.

Watercolors are so difficult.
Watercolors are the most difficult medium I’ve ever worked with. I think it’s way more difficult than skin. It’s not like you can go over oil and acrylic. It’s a done deal.

Are your mom and dad still together?
No. My dad died when I was 13.

I’m sorry to hear that.
It’s part of life. The only thing certain in life is death.

I hear its death and taxes.
[Laughs.] Exactly. My dad taught me a great amount before he died. I got lucky. I had a father that was around as I grew up and who taught me cool stuff.

Were you doing art when you were a kid?
That was the first thing I started doing. When I was bored, my dad would tell me to draw or paint, so I was pretty much born with a pencil and a brush in my hand. When people would ask what I wanted to be when I grew up, I’d say, ‘I want to be an artist.’ I always knew what I was going to do.

You found your passion and you were just going to pursue it.
Nothing was going to get in my way.

What kind of trouble?
You name it. Drugs. Theft. Everything that goes along with forming a drug habit. Fortunately, I didn’t stay involved with that for too long. I made it out alive and not in prison. I was skating with all the guys at Sadlands like Big Jer and Cholo. Cholo was always there. It’s all the same people that I’m still skating with today. It all came from that little area. I used to see Christian and Nathan Fletcher skate at Sadlands a lot, but I didn’t become friends with them until later on, when I was on the North Shore surfing.