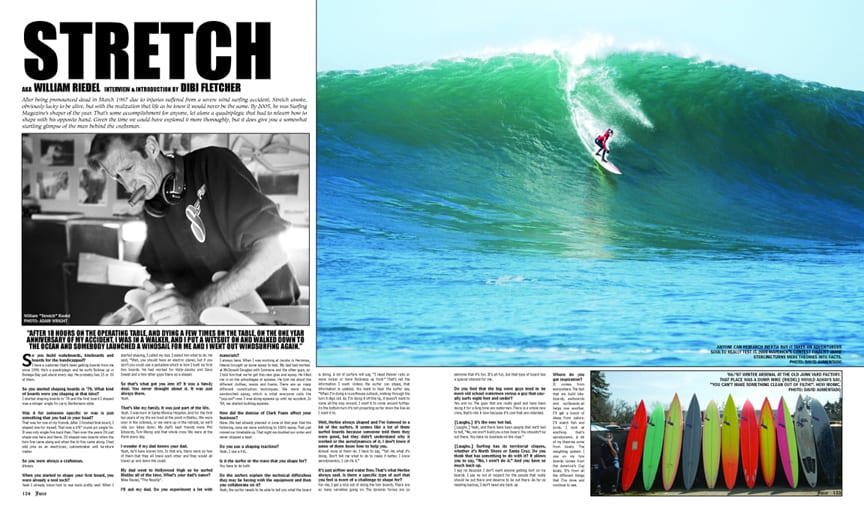 After being pronounced dead in March 1987 due to injuries suffered from a severe wind surfing accident, Stretch awoke, obviously lucky to be alive, but with the realization that life as he knew it would never be the same. By 2005, he was Surfing Magazine ‘s shaper of the year. That ‘s some accomplishment for anyone, let alone a quadriplegic that had to relearn how to shape with his opposite hand. Given the time we could have explored it more thoroughly, but it does give you a somewhat startling glimpse of the man behind the craftsman.

“The impact was pretty great. Then I went to lift my head out of the water and I couldn’t move. At the time, I could hold my breath for about three minutes, so I knew I had three minutes to live.”

So you build wakeboards, kiteboards and boards for the handicapped?
I have a customer that ‘s been getting boards from me since 1990. He ‘s a quadriplegic and he surfs Bolinas up in Bodega Bay just about every day. He probably has 15 or 20 of them.

Was it for someone specific or was is just something that you had in your head?
That was for one of my friends. After I finished that board, I shaped one for myself. That was a 6 ‘8’ round pin single fin. It was only single fins back then. Then over the years I ‘d just shape one here and there. I ‘d shaped new boards when the twin fins came along and when the tri fins came along. I had
odd jobs as an electrician, cabinetmaker and furniture maker.

So you were always a craftsman.
Always.

When you started to shape your first board, you were already a tool tech?
Yeah I already knew how to use tools pretty well. When I started shaping, I called my dad. I asked him what to do. He said, ‘Well, you should have an electric planer, but if you don ‘t you could use a jackplane which is how I built my first two boards. He had worked for Velzy-Jacobs and Dave Sweet and a few other guys there as a shaper.

So that ‘s what got you into it? It was a family deal. You never thought about it. It was just always there.
Yeah.

That ‘s like my family. It was just part of the life.
Yeah. I was born in Santa Monica Hospital. And for the first ten years of my life we lived at the point in Malibu. We were over in the colonies, or we were up in the retreat, so we ‘d ride our bikes down. My dad ‘s best friends were Phil Edwards, Tom Morey and that whole crew. We were at the Point every day.

I wonder if my dad knows your dad.
Yeah, he ‘d have known him. In that era, there were so few of them that they all knew each other and they would all travel up and down the coast.

My dad went to Hollywood High so he surfed Malibu all of the time. What ‘s your dad ‘s name?
Mike Riedel, ‘The Noodle’.

I ‘ll ask my dad. Do you experiment a lot with materials?
I always have. When I was working at Jacobs in Hermosa, Hexcel brought us some epoxy to test. My dad had worked at McDonald Douglas with Simmons and the other guys, so I told him that we ‘ve got this new glue and epoxy. He filled me in on the advantages of epoxies. He told me about the different clothes, resins and foams. There are so many different construction techniques. We were doing sandwiched epoxy, which is what everyone calls the ‘pop-out’ now. I was doing epoxies up until my accident. In ’89, we started building epoxies.

How did the demise of Clark Foam affect your business?
None. We had already planned in June of that year that the following June we were switching to 100% epoxy. That just moved our timetable up. That night we doubled our order and never skipped a beat.

Do you use a shaping machine?
Yeah, I use a KKL.

Is it the surfer or the wave that you shape for?
You have to do both.

Do the surfers explain the technical difficulties they may be having with the equipment and then you collaborate on it?
Yeah, the surfer needs to be able to tell you what the board is doing. A lot of surfers will say, ‘I need thinner rails or more rocker or more thickness up front.’ That ‘s not the information I want. Unless the surfer can shape, that information is useless. You want to hear the surfer say, ‘When I ‘m doing a roundhouse cutback, midway through the turn it digs rail. As I ‘m doing it off the lip, it doesn ‘t want to come all the way around. I want it to come around further. On the bottom turn it ‘s not projecting as far down the line as I want it to.

Well, Herbie always shaped and I ‘ve listened to a lot of the surfers. It seems like a lot of them surfed boards because someone told them they were good, but they didn ‘t understand why it worked or the aerodynamics of it. I don ‘t know if some of them know how to help you.
Almost none of them do. I have to say, ‘Tell me what it ‘s doing. Don ‘t tell me what to do to make it better. I know aerodynamics. I can fix it.’

It ‘s just airflow and water flow.That ‘s what Herbie always said. Is there a specific type of surf that you feel is more of a challenge to shape for?
For me, I get a kick out of doing the tow boards. There are so many variables going on. The dynamic forces are so extreme that it ‘s fun. It ‘s all fun, but that type of board has a special interest for me.

Do you find that the big wave guys tend to be more old school watermen versus a guy that usually surfs eight feet and under?
Yes and no. The guys that are really good and have been doing it for a long time are watermen. There is a whole new crew, that ‘s into it now because it ‘s cool that are retarded.

[Laughs.] It ‘s the new hot fad.
[Laughs.] Yeah, and there have been people that we ‘d had to tell, ‘No, we won ‘t build you a tow board. You shouldn ‘t be out there. You have no business on the rope.’

[Laughs.] Surfing has its territorial cliques, whether it ‘s North Shore or Santa Cruz. Do you think that has something to do with it? It allows you to say, ‘No, I won ‘t do it.’ And you have so much back up.
I say no because I don ‘t want anyone getting hurt on my boards. I say no out of respect for the people that really should be out there and deserve to be out there. As far as needing backup, I don ‘t need any back up.