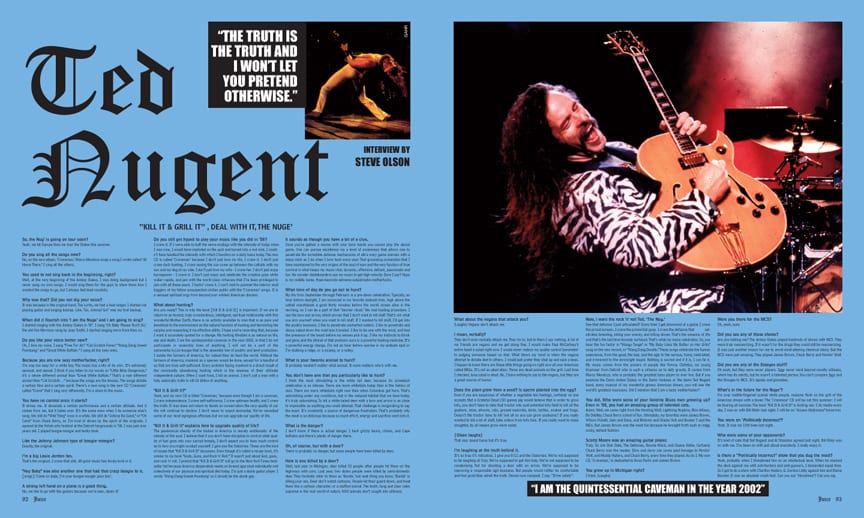 “Kill it and Grill It. Deal with it, the Nuge.”

So, the Nug’ is going on tour soon?
Yeah, we hit Europe then we tour the States this summer.

Do you sing all the songs now?
No, on the new album, ‘Craveman,’ Marco Mendoza sings a song I wrote called ‘At Home There.’ I sing all the others.

You used to not sing back in the beginning, right?
Well, at the very beginning of the Amboy Dukes, I was doing background but I never sang my own songs. I would sing them for the guys to show them how I wanted the songs to go, but I always had lead vocalists.

Why was that? Did you not dig your voice?
It was because in the original band, The Lords, we had a lead singer. I started out playing guitar and singing backup. Like, ‘Go, Johnny! Go!’ was my first backup.

“THE TRUTH IS THE TRUTH AND I WON’T LET YOU PRETEND OTHERWISE.”

When did it flourish into ‘I am the Nuge’ and I am going to sing?
I started singing with the Amboy Dukes in ’87. I sang ‘Oh Baby Please Don’t Go,’ the old Van Morrison song by Joey Smith. I started singing more from then on.

Do you like your voice better now?
Oh, I love my voice. I sang ‘Free For All,’ ‘Cat Scratch Fever,’ ‘Wang Dang Sweet Poontang,’ and ‘Great White Buffalo.’ I sang all the sexy ones.

Because you are one sexy cat, right?
I’m way too sexy for a white boy. The music has a life of its own. It’s extremely sensual, and sexual. I think if you listen to my vocals on ‘Little Miss Dangerous,’ it’s a whole different animal than ‘Great White Buffalo.’ That’s a real different animal than ‘Cat Scratch…’ because the songs are the bosses. The songs dictate a certain flow and a certain spirit. There’s a new song in the new CD ‘Craveman’ called ‘Crave’ that I sing very differently. I’m a slave to the music.

You have no control once it starts?
It drives me. It demands a certain performance and a certain attitude. And it comes from me, but it takes over. It’s the same even when I do someone else’s song. We still do ‘Wild Thing’ once in a while. We still do ‘Johnny Be Good,’ or ‘Oh Carol’ from Chuck Berry, so I’m kind of driven by the spirit of the originals. I opened at the Polish arts festival at the Detroit fairgrounds in ’58. I was just nine years old. I played boogie-woogie and honky-tonk.

Like the Johnny Johnson type of boogie-woogie?
Exactly, the original.

I’m a big Louie Jordon fan.
That’s the original. I crave that shit. All good music has honky-tonk in it.

‘Hey Baby’ was also another one that had that crazy boogie to it.
[sings] ‘Come on baby, I’m your boogie-woogie juice boy’.

A strong left hand on a piano is a good thing.
No, we like to go with the guitars because we’re men, damn it!