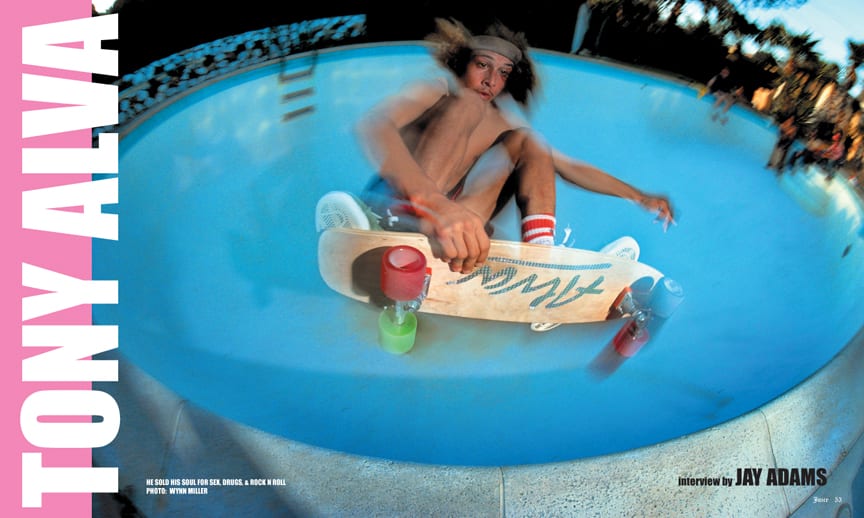 INTERVIEW AND INTRODUCTION BY JAY ADAMS
PHOTO BY WYNN MILLER

How in the hell can you describe what Tony Alva means to the world of skateboarding? T.A. was the first skater to set standards. Nobody did it better or with more style than T.A. He was the first world champ, first in the world record books, first winner of the ‘SkateBoarder’ Poll and the very first to pull off frontside airs in pools. Nobody was a bigger rock star skater than Alva; Not then and not now. In his prime, you were lucky to even get to drop in while he was skating. If you did, you’d better be able to rip. If you couldn’t, you’d better just sit and watch. I can’t tell you how many times he showed up at a skatepark and everybody would just stop skating and take notes. The early days of pool-riding belong to him. He paved the road that all modern day skaters are riding down. The name Tony Alva is still burning bright in the skateboard world. Can you name anyone else who has been doing it as long and as good as Alva? Don’t think he’s ready to give it up anytime soon, because if you did, you’d be kidding yourself. I bet if you asked him he’d say it’s just beginning (again). With a new shoe from Vans and Alva Skateboards coming on strong, I’d say it’s a safe bet to believe he’s going to be around for awhile. ‘Yeah, T.A. You rule, homeboy. Thanks for all the memories. Keep it real like you always have. Never say it’s over.’ Your brother for life, JAY BOY.

Yeah, sorry it took so long to hook this up. It’s hard to get time away. I’m on such a limited time thing.
It’s hard with the time difference. It could be worse. I could be in Sydney, Australia.

Yeah, it could be worse. I could be in Haleiwa Prison.
That’s true.

That would be even worse.
Yeah, it would be.

So, what’s up?
I’m just chilling right now after working all day.

“They still skated with that upright longboard style that you and I, and all the boys kind of changed later on with the Bertlemanns. I think the low-slung, hardcore Z-Boys style was the beginning of radical skateboarding.”

You know who was in the shop today? Jef Hartsel. We’ve been skating together.
Yeah? How’s he doing? Hartsel still rips.

Yeah. We found this killer square pool and after a few rides we were killing it. It was so fun.
Hartsel’s good. He was always one of my favorite street skaters.

He’s the coolest guy in the world, too.
Yeah, he’s mellow and he can skate pools like there’s no tomorrow. And Cooksie is still ripping. I saw Cooksie at the Old School Skate Jam and he was tearing it up.

Okay, let’s talk about how you got into skateboarding.
Basically, the way I got into skating was through surfing. I was ten years old cruising on the sidewalks in Santa Monica, skating down to the beach, checking out the chicks and checking the waves. In between surf sessions, I was into sidewalk surfing.

It was total transportation to go surfing?
Yeah, it was either that or ride your bike with your skateboard on the handlebars like we used to do at Revere.

Talk about your mom and dad.
My mom and dad got divorced when I was ten. My mom was always really supportive. She was cool. She was a lot like your mom. She said, “Do whatever you want to do as long as you get an education”. She was cool like that. But my brother and sister moved in with my mom, so I ended up going to live with my Dad. He worked a lot, so I was basically a latch key kid, so I used to hang out at the Boys Club a lot. There were a few guys there like the Earhart brothers that surfed. We all surfed the north side of Santa Monica pier.

There used to be that left there off that restaurant.
Yeah, it was like a mini T’s. There was a right that broke short into the pier and a left that went off and just reeled down the beach.

Did you ever skate that hill that was right by the merry-go-round there on the boardwalk?
Oh yeah, that hill was like a big bank.

It was in front of the biker bar and Eli’s Surf Rentals.
And the Hot Dog on a Stick.

That was one of my earliest skate memories.
That was the first Hot Dog on a Stick where all the girls had the cute little skirts and hats in all different colors. You’d go there and the girls would give you free hot dogs on a stick.

I remember there was another bank in the parking lot on the other side of the pier, too.
Yeah, I used to skate that with Hartsel and J.T [John Thomas]. They used to do all kinds of crazy street tricks on that handicap ramp with the handrails. We skated that through the ‘90s.

Who were the first guys that you looked up to in skating?
There were some north side guys that were pretty good, like John Davison, Ross Powell and those guys that went to Lincoln Jr. High School. There was Mike Hofer, who’s dead now. He was in prison for awhile.

Were these all Hobie team guys?
No, they were all my age. We all looked up to the Hobie team. The other guys that were really good were Torger Johnson, Dave Hilton and Danny Bearer.

They were like our pioneers; like our Duke Kahanamoku.
Yeah, but they still skated with that upright longboard style that you and I, and all the boys kind of changed later on with the Bertlemanns. I think the low-slung, hardcore Z-Boys style was the beginning of radical skateboarding. When you see the Dogtown film, it makes people realize how upright and stiff and stickman skateboarding was before we showed up and started skating in contests. Remember all the surf films we had footage in like “Super Session”?

How was that? When we were kids, we’d go to the Santa Monica Civic and see ourselves in the movies and then go outside and skate in front of the crowd.
I was stoked. That was the ultimate demo.