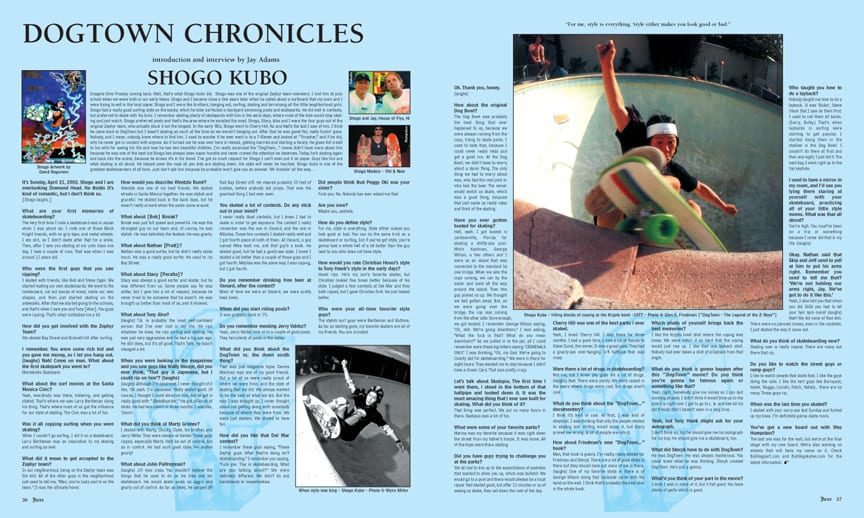 Imagine Elvis Presley coming back. Well, that’s what Shogo Kubo did. Shogo was one of the original Zephyr team members. I met him at judo school when we were both in our early teens. Shogo and I became close a few years later when he called about a surfboard that my mom and I were trying to sell in the local paper. Shogo and I were like brothers, hanging out, surfing, skating and terrorizing all the little neighborhood girls. Shogo had a really good surfing style on the banks, which he later perfected in backyard swimming pools and skateparks. He did well in contests, but preferred to skate with his bros. I remember skating plenty of skateparks with him in the early days, where most of the kids would stop skating and just watch. Shogo preferred pools and that’s the area where he excelled the most. Shogo, Stacy, Alva and I were the four guys out of the original Zephyr team, who actually stuck it out the longest.

In the early ’80s, Shogo went to Cherry Hill, NJ and that’s the last I saw of him. I think he came back to DogTown but I wasn’t skating as much at the time so we weren’t hanging out. After that he was gone! No, really fuckin’ gone. Nobody, and I mean, nobody, knew where to find him. I used to wonder if he ever went in to a 7-Eleven and looked at “Thrasher,” and if he did, why he never got in contact with anyone. As it turned out he was over here in Hawaii, getting married and starting a family. He gives full credit to his wife for saving his life and now he has two beautiful children. I’m really surprised the “DogTown…” movie didn’t have more about him because he was one of the best but Shogo has always been super humble and never craved the attention he deserves. Today, he’s skating again and back into the scene, because he knows it’s in his blood. I’ve got so much respect for Shogo I can’t even put it on paper. Guys like him are what skating is all about. He helped pave the road all you kids are skating down. His style will never be touched. Shogo Kubo is one of the greatest skateboarders of all time. Just don’t ask him because he probably won’t give you an answer. ‘Mr Humble’ all the way…

It’s Sunday, April 21, 2002. Shogo and I are overlooking Diamond Head. He thinks it’s kind of romantic, but I don’t think so.
[Shogo laughs.]

“FOR ME, STYLE IS EVERYTHING. STYLE EITHER MAKES YOU LOOK GOOD OR BAD.”

What are your first memories of skateboarding?
The very first time I rode a skateboard was in Japan when I was about six. I rode one of those Black Knight boards, with no grip tape, and metal wheels. I ate shit, so I didn’t skate after that for a while. Then, after I saw you skating at our judo class one day, I took a couple of runs. That was when I was around 12 years old.

Who were the first guys that you saw ripping?
I skated with friends, like Bob and Steve Ogan. We started making our own skateboards. We went to the lumberyard, cut out pieces of wood, made our own shapes, and then just started skating on the sidewalks. After that we started going to the schools, and that’s when I saw you and Tony [Alva]. You guys were ripping. That’s what motivated me a lot.

How did you get involved with the Zephyr Team?
We skated Bay Street and Bicknell Hill after surfing. I guess that’s how I got hooked up.

I remember. You were some rich kid and you gave me money so I let you hang out.
(laughs) Nah! Come on man.

What about the first skatepark you went to?
I remember going down to El Cajon and as soon as we got there the dudes were like, “Damn, the Z-Boys are here. And they all stopped skating, I don’t know if you remember that. It was you, me, Billy Yeron, and a couple of other guys. That was the Henry Hester deal.

Do you remember the surf movies at the Santa Monica Civic?
Yeah, everybody was there, smoking out, hollering, and getting stoked. That’s where we saw Larry Bertlemann doing his thing. That’s where most of us got the influence for our style of skating.

Was it all copying surfing when you were skating?
In a way, that’s what we were trying to do on our skateboards. When I couldn’t go surfing, I did it on a skateboard. Larry Bertlemann was an inspiration to my skating and surfing as well. The Civic was a lot of fun.