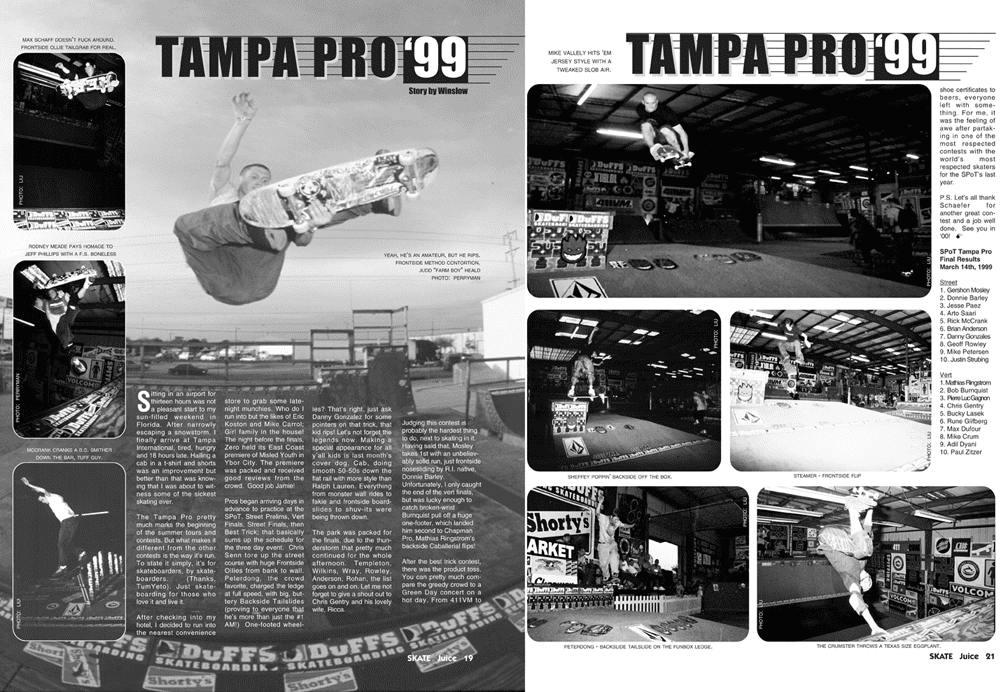 Sitting in an airport for thirteen hours was not a pleasant start to my sun-filled weekend in Florida. After narrowly escaping a snowstorm, I finally arrive at Tampa International, tired, hungry and 18 hours late. Hailing a cab in a t-shirt and shorts was an improvement but better than that was knowing that I was about to witness some of the sickest skating ever.

The Tampa Pro pretty much marks the beginning of the summer tours and contests. But what makes it different from the other contests is the way it’s run. To state it simply, it’s for skateboarders, by skateboarders. (Thanks, TumYeto). Just skateboarding for those who love it and live it.

After checking into my hotel, I decided to run into the nearest convenience store to grab some late-night munchies. Who do I run into but the likes of Eric Koston and Mike Carrol; Girl family in the house! The night before the finals, Zero held its East Coast premiere of Misled Youth in Ybor City. The premiere was packed and received good reviews from the crowd.  Good job Jamie!

Pros began arriving days in advance to practice at the SPoT. Street Prelims, Vert Finals, Street Finals, then Best Trick; that basically sums up the schedule for the three day event.  Chris Senn tore up the street course with huge Frontside Ollies from bank to wall. Peterdong, the crowd favorite, charged the ledge at full speed, with big, buttery Backside Tailslides (proving to everyone that he’s more than just the #1 am!)  One-footed wheelies? That’s right, just ask Danny Gonzalez for some pointers on that trick, that kid rips! Let’s not forget the legends now. Making a special appearance for all y’all kids is last month’s cover dog, Cab, doing smooth 50-50s down the flat rail with more style than Ralph Lauren. Everything from monster wall rides to fakie and frontside boardslides to shuv-its were being thrown down.

The park was packed for the finals, due to the thunderstorm that pretty much continued for the whole afternoon. Templeton, Wilkins, Wray, Rowley, Anderson, Rohan, the list goes on and on. Let me not forget to give a shout out to Chris Gentry and his lovely wife, Ricca.
Judging this contest is probably the hardest thing to do, next to skating in it. Having said that, Mosley takes 1st with an unbelievably solid run, just frontside nosesliding by R.I. native, Donnie Barley. Unfortunately, I only caught the end of the vert finals, but was lucky enough to catch broken-wrist Burnquist pull off a huge one-footer, which landed him second to Chapman Pro, Mathias Ringstrom’s backside Caballerial flips!

After the best trick contest, there was the product toss. You can pretty much compare the greedy crowd to a Green Day concert on a hot day. From 411VM to shoe certificates to beers, everyone left with something. For me, it was the feeling of awe after partaking in one of the most respected contests with the world’s most respected skaters for the SPoT’s last year.

P.S. Let’s all thank Schaefer for another great contest and a job well done.  See you in ‘00!