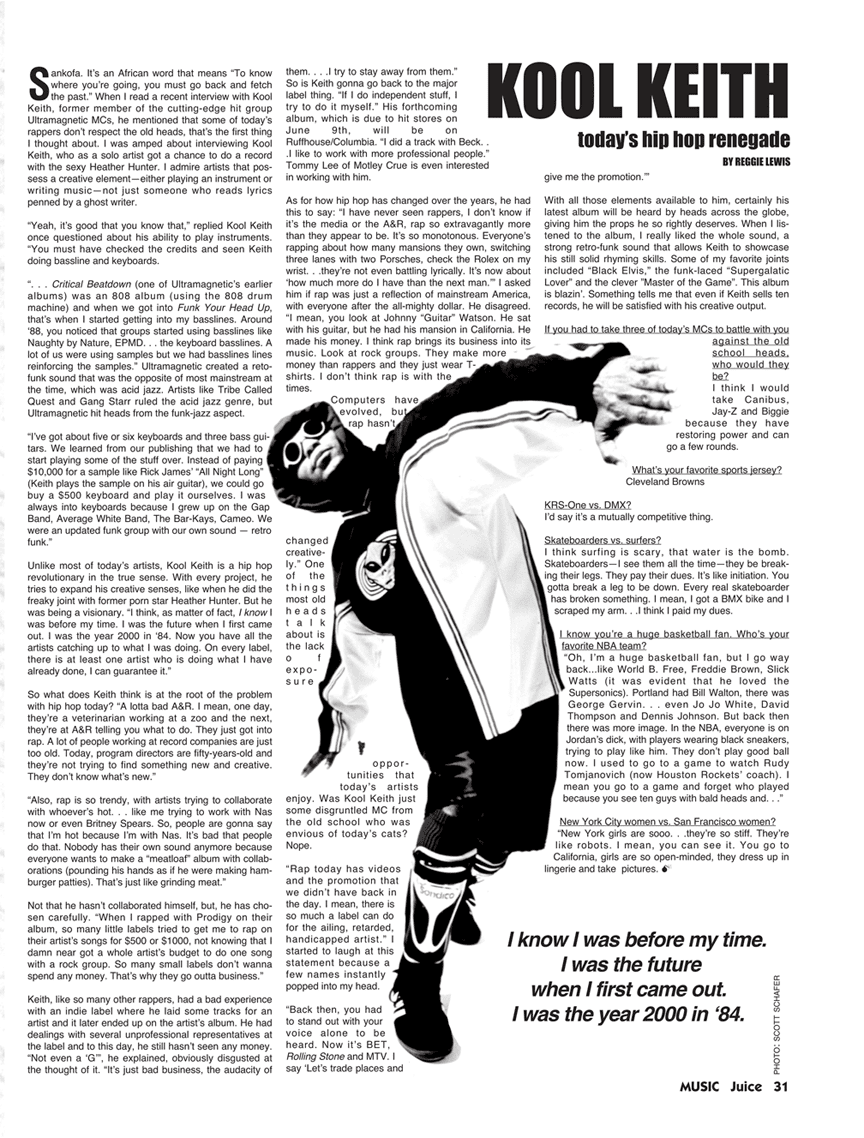 Sankofa. It’s an African word that means “To know where you’re going, you must go back and fetch the past.” When I read a recent interview with Kool Keith, former member of the cutting-edge hit group Ultramagnetic MCs, he mentioned that some of today’s rappers don’t respect the old heads, that’s the first thing I thought about. I was amped about interviewing Kool Keith, who as a solo artist got a chance to do a record with the sexy Heather Hunter. I admire artists that possess a creative element—either playing an instrument or writing music—not just someone who reads lyrics penned by a ghost writer.

“Yeah, it’s good that you know that,” replied Kool Keith once questioned about his ability to play instruments. “You must have checked the credits and seen Keith doing bassline and keyboards.

“. . . Critical Beatdown (one of Ultramagnetic’s earlier albums) was an 808 album (using the 808 drum machine) and when we got into Funk Your Head Up, that’s when I started getting into my basslines. Around ‘88, you noticed that groups started using basslines like Naughty by Nature, EPMD. . . the keyboard basslines. A lot of us were using samples but we had basslines lines reinforcing the samples.” Ultramagnetic created a retro-funk sound that was the opposite of most mainstream at the time, which was acid jazz. Artists like Tribe Called Quest and Gang Starr ruled the acid jazz genre, but Ultramagnetic hit heads from the funk-jazz aspect.

“I’ve got about five or six keyboards and three bass guitars. We learned from our publishing that we had to start playing some of the stuff over. Instead of paying $10,000 for a sample like Rick James’ “All Night Long” (Keith plays the sample on his air guitar), we could go buy a $500 keyboard and play it ourselves. I was always into keyboards because I grew up on the Gap Band, Average White Band, The Bar-Kays, Cameo. We were an updated funk group with our own sound — retro funk.”

Unlike most of today’s artists, Kool Keith is a hip hop revolutionary in the true sense. With every project, he tries to expand his creative senses, like when he did the freaky joint with former porn star Heather Hunter. But he was being a visionary. “I think, as matter of fact, I know I was before my time. I was the future when I first came out. I was the year 2000 in ‘84. Now you have all the artists catching up to what I was doing. On every label, there is at least one artist who is doing what I have already done, I can guarantee it.”

So what does Keith think is at the root of the problem with hip hop today? “A lotta bad A&R. I mean, one day, they’re a veterinarian working at a zoo and the next, they’re at A&R telling you what to do. They just got into rap. A lot of people working at record companies are just too old. Today, program directors are fifty-years-old and they’re not trying to find something new and creative. They don’t know what’s new.”

“Also, rap is so trendy, with artists trying to collaborate with whoever’s hot. . . like me trying to work with Nas now. So, people are gonna say that I’m hot because I’m with Nas. It’s bad that people do that. Nobody has their own sound anymore because everyone wants to make a “meatloaf” album with collaborations (pounding his hands as if he were making hamburger patties). That’s just like grinding meat.”