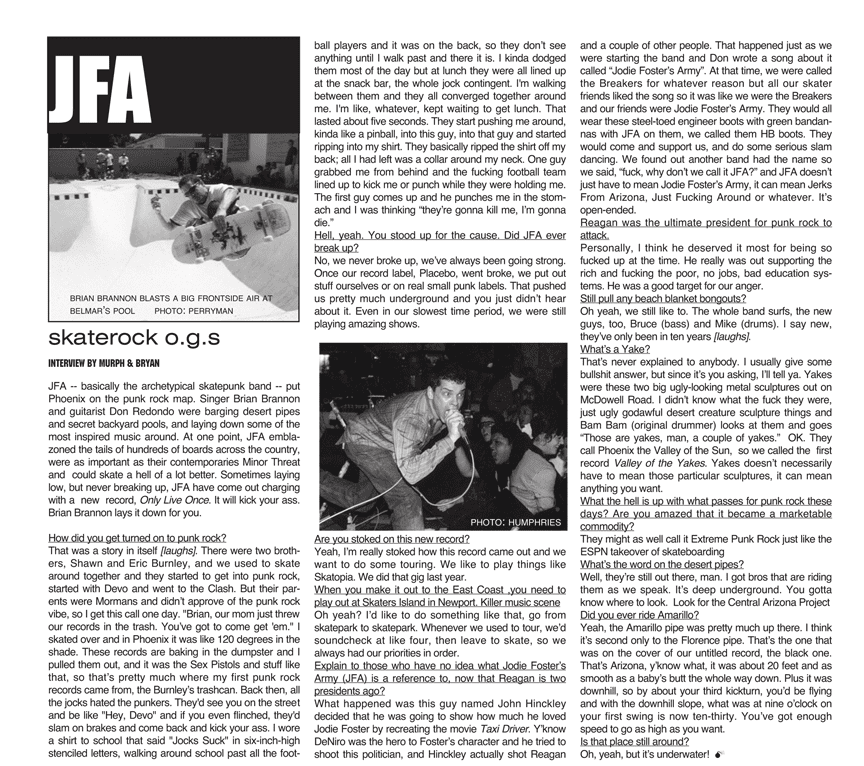 JFA — basically the archetypical skatepunk band — put Phoenix on the punk rock map. Singer Brian Brannon and guitarist Don Redondo were barging desert pipes and secret backyard pools, and laying down some of the most inspired music around. At one point, JFA emblazoned the tails of hundreds of boards across the country, were as important as their contemporaries Minor Threat and could skate a hell of a lot better. Sometimes laying low, but never breaking up, JFA have come out charging with a new record, Only Live Once. It will kick your ass. Brian Brannon lays it down for you.

How did you get turned on to punk rock?
That was a story in itself [laughs]. There were two brothers, Shawn and Eric Burnley, and we used to skate around together and they started to get into punk rock, started with Devo and went to the Clash. But their parents were Mormans and didn’t approve of the punk rock vibe, so I get this call one day. “Brian, our mom just threw our records in the trash. You’ve got to come get ’em.” I skated over and in Phoenix it was like 120 degrees in the shade. These records are baking in the dumpster and I pulled them out, and it was the Sex Pistols and stuff like that, so that’s pretty much where my first punk rock records came from, the Burnley’s trashcan. Back then, all the jocks hated the punkers. They’d see you on the street and be like “Hey, Devo” and if you even flinched, they’d slam on brakes and come back and kick your ass. I wore a shirt to school that said “Jocks Suck” in six-inch-high stenciled letters, walking around school past all the football players and it was on the back, so they don’t see anything until I walk past and there it is. I kinda dodged them most of the day but at lunch they were all lined up at the snack bar, the whole jock contingent. I’m walking between them and they all converged together around me. I’m like, whatever, kept waiting to get lunch. That lasted about five seconds. They start pushing me around, kinda like a pinball, into this guy, into that guy and started ripping into my shirt. They basically ripped the shirt off my back; all I had left was a collar around my neck. One guy grabbed me from behind and the fucking football team lined up to kick me or punch while they were holding me. The first guy comes up and he punches me in the stomach and I was thinking “they’re gonna kill me, I’m gonna die.”

“I get this call one day. “Brian, our mom just threw our records in the trash. You’ve got to come get ’em.” I skated over and in Phoenix it was like 120 degrees in the shade. These records are baking in the dumpster and I pulled them out, and it was the Sex Pistols and stuff like that, so that’s pretty much where my first punk rock records came from.”

Hell, yeah. You stood up for the cause. Did JFA ever break up?
No, we never broke up, we’ve always been going strong. Once our record label, Placebo, went broke, we put out stuff ourselves or on real small punk labels. That pushed us pretty much underground and you just didn’t hear about it. Even in our slowest time period, we were still playing amazing shows.

Are you stoked on this new record?
Yeah, I’m really stoked how this record came out and we want to do some touring. We like to play things like Skatopia. We did that gig last year.

When you make it out to the East Coast ,you need to play out at Skaters Island in Newport. Killer music scene.
Oh yeah? I’d like to do something like that, go from skatepark to skatepark. Whenever we used to tour, we’d soundcheck at like four, then leave to skate, so we always had our priorities in order.

Explain to those who have no idea what Jodie Foster’s Army (JFA) is a reference to, now that Reagan is two presidents ago?
What happened was this guy named John Hinckley decided that he was going to show how much he loved Jodie Foster by recreating the movie Taxi Driver. Y’know DeNiro was the hero to Foster’s character and he tried to shoot this politician, and Hinckley actually shot Reagan and a couple of other people. That happened just as we were starting the band and Don wrote a song about it called “Jodie Foster’s Army”. At that time, we were called the Breakers for whatever reason but all our skater friends liked the song so it was like we were the Breakers and our friends were Jodie Foster’s Army. They would all wear these steel-toed engineer boots with green bandannas with JFA on them, we called them HB boots. They would come and support us, and do some serious slam dancing. We found out another band had the name so we said, “fuck, why don’t we call it JFA?” and JFA doesn’t just have to mean Jodie Foster’s Army, it can mean Jerks From Arizona, Just Fucking Around or whatever. It’s open-ended.

Reagan was the ultimate president for punk rock to attack.
Personally, I think he deserved it most for being so fucked up at the time. He really was out supporting the rich and fucking the poor, no jobs, bad education systems. He was a good target for our anger.

Still pull any beach blanket bongouts?
Oh yeah, we still like to. The whole band surfs, the new guys, too, Bruce (bass) and Mike (drums). I say new, they’ve only been in ten years [laughs].

What’s a Yake?
That’s never explained to anybody. I usually give some bullshit answer, but since it’s you asking, I’ll tell ya. Yakes were these two big ugly-looking metal sculptures out on McDowell Road. I didn’t know what the fuck they were, just ugly godawful desert creature sculpture things and Bam Bam (original drummer) looks at them and goes “Those are yakes, man, a couple of yakes.” OK. They call Phoenix the Valley of the Sun, so we called the first record Valley of the Yakes. Yakes doesn’t necessarily have to mean those particular sculptures, it can mean anything you want.

What the hell is up with what passes for punk rock these days? Are you amazed that it became a marketable commodity?
They might as well call it Extreme Punk Rock just like the ESPN takeover of skateboarding

What’s the word on the desert pipes?
Well, they’re still out there, man. I got bros that are riding them as we speak. It’s deep underground. You gotta know where to look. Look for the Central Arizona Project.