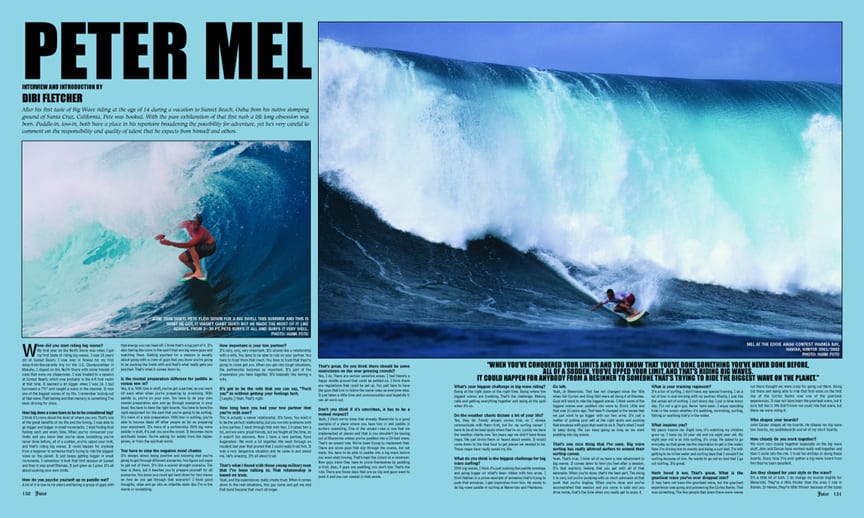 After his first taste of Big Wave riding at the age of 14 during a vacation to Sunset Beach, Oahu from his native stomping ground of Santa Cruz, California, Pete was hooked. With the pure exhilaration of that first rush a life long obsession was born. Paddle-in, tow-in, both have a place in his repertoire broadening the possibility for adventure, yet he’s very careful to comment on the responsibility and quality of talent that he expects from himself and others.

“When you’ve conquered your limits and you know that you’ve done something you’ve never done before, all of a sudden, you’ve upped your limit, and that’s riding big waves. It could happen for anybody from a beginner to someone that’s trying to ride the biggest wave on the planet.”

When did you start riding big waves?
My first year on the North Shore was when I got my first taste of riding big waves. I was 14 years old at Sunset Beach. I was over in Hawaii for my first away-from-the-parents trip for the U.S. Championships in Makaha. I stayed on the North Shore with some friends of mine that were my chaperones. I was treated to a session at Sunset Beach, which was probably in the 6-8 foot realm at that time. It seemed a lot bigger when I was 14. I had borrowed a 7’6′ and caught a wave in the channel. It was one of the biggest waves of my life. I remember kicking out of that wave. That feeling and that memory is something I’ve been striving for since.

How big does a wave have to be to be considered big?
I think it’s more about the level of where you are. That’s one of the great benefits of my life and the timing. I was able to go bigger and bigger in small increments. I kept finding that feeling each and every time. When you’ve conquered your limits and you know that you’ve done something you’ve never done before, all of a sudden, you’ve upped your limit, and that’s riding big waves. It could happen for anybody from a beginner to someone that’s trying to ride the biggest wave on the planet. It just keeps getting bigger in small increments. I remember it took that first session at Sunset and then it was small Waimea. It just grew as I grew. It’s all about pushing your own limits.

How do you psyche yourself up to paddle out?
A lot of it is due to my peers and having a group of guys with that energy you can feed off. I think that’s a big part of it. It’s also having the icons in the sport that are big wave guys and watching them. Getting psyched for a session is usually about going with a crew of guys that you know you’re going to be pushing the limits with and that’s what really gets you psyched. That’s what it comes down to.

Is the mental preparation different for paddle in versus tow in?
Yes, it is. With tow in stuff, you’ve got a partner, so you work off each other when you’re preparing by practicing. With paddle in, you’re on your own. You have to do your own mental preparation solo and go through scenarios in your head. You have to have the right boards. You have to have the right equipment for the spot that you’re going to be surfing. It’s more of a solo preparation. With tow in surfing, you’re able to bounce ideas off other people as far as preparing your equipment. It’s more of a partnership. With big wave paddle in stuff, it’s just you and the ocean. It becomes more spiritually based. You’re asking for safety from the higher power, or from the spiritual world.

You have to stop the negative mind chatter.
It’s always about being positive and knowing that you’re going to get through different scenarios. You figure out ways to get out of them. It’s like a scared straight scenario. The fear is there, but it teaches you to prepare yourself for all scenarios. You know you could get held down for two waves so how do you get through that scenario? I think good thoughts, relax and go into an infantile state like I’m in the womb or something.

It’s got to be the wife that you can say, ‘Fuck you’ to without getting your feelings hurt.
[Laughs.] Yeah. That’s right.

How long have you had your tow partner that you’re with now?
This is actually a newer relationship. It’s funny. You want it to be the perfect relationship, but you run into problems with a tow partner. I went through that with Ken. I trusted him a lot, and we were great friends, but we fought all the time, so it wasn’t fun anymore. Now I have a new partner, Ryan Augenstein. We work a bit together. We went through an incident last year that proved that I could really trust him. It was a very dangerous situation and he came in and saved me. He’s amazing. It’s all about trust.

That’s what I found with these young military men that I’ve been talking to. That relationship is based on trust.
Yeah, and the experiences really create trust. When it comes down to the real situations, this guy came and got me and that bond became that much stronger.

That’s great. Do you think there should be some restrictions on the ever growing crowds?
Yes, I do. There are certain sensitive areas. I feel there’s a happy middle ground that could be settled on. I think there are regulations that could be set up. You just have to have the guys that tow in follow the same rules as everyone else. It just takes a little time and communication and hopefully it can all work out.

Don’t you think if it’s unwritten, it has to be a mutual respect?
Yeah, I think we’ve done that already. Mavericks is a good example of a place where you have tow in and paddle in surfers coexisting. One of the unsaid rules is one that we implemented at places and that is you shouldn’t be towing out at Mavericks unless you’ve paddled into a 20-foot wave. That’s an unsaid rule. We’ve been trying to implement that. There are some guys that slip through the cracks, but not many. You have to be able to paddle into a big wave before you even start towing. That’s kept the crowd at a minimum. Now guys know they have to prove themselves by paddling in first. Also, if guys are paddling, you don’t tow. That’s the rule. There are those days that are so big and guys want to push it and you can coexist in that sense.

What’s your biggest challenge in big wave riding?
Being at the right place at the right time. Being where the biggest waves are breaking. That’s the challenge. Making calls and getting everything together and being at the spot when it’s on.

Do the weather charts dictate a lot of your life?
Yes, they do. Family always comes first, so I always communicate with them first, but for my surfing career I have to be at he best spots when they’re on. Luckily we have the weather charts now. Ten years ago we didn’t have those maps. We just drove there or heard about swells. It would come down to the final hour to get places we needed to be. Those maps have really saved my life.

What do you think is the biggest challenge for big wave surfing?
With big waves, I think it’s just pushing the paddle envelope and going bigger on what’s been ridden with two arms. I think Nathan [Fletcher] is a prime example of someone that’s trying to push that envelope. I get inspiration from him. He wants to do big wave paddle in surfing at Mavericks and Phantoms.

Go left.
Yeah, at Mavericks. That has not changed since the ’60s when Pat Curren and Greg Noll were all doing it at Waimea. Guys still want to ride the biggest waves. I think some of the biggest waves ever paddled into were by Brock Little and that was 15 years ago. That hasn’t changed in the sense that we just want to go bigger with our two arms. It’s just a matter of putting your self at the right spots and pushing that envelope with guys that want to do it. That’s what I want to keep doing. We can keep going as long as we want paddling into big waves.