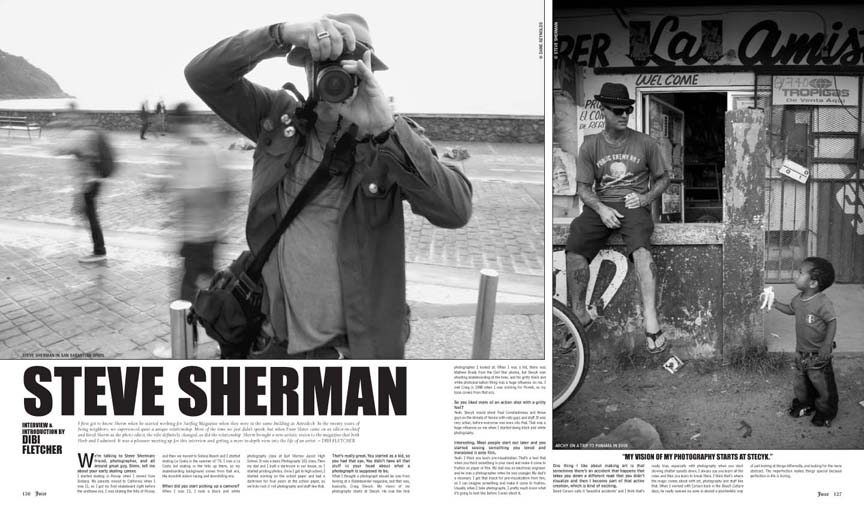 I first got to know Sherm when he started working for Surfing Magazine when they were in the same building as Astrodeck. In the twenty years of being neighbors, we experienced quite a unique relationship. Most of the time we just didn’t speak, but when Evan Slater came on as editor-in-chief and hired Sherm as the photo editor, the vibe definitely changed, as did the relationship. Sherm brought a new artistic vision to the magazine that both Herb and I admired. It was a pleasure meeting up for this interview and getting a more in-depth view into the life of an artist.

We’re talking to Steve Sherman: friend, photographer, and all around great guy. Steve, tell me about your early skating career.
I started skating in Poway when I moved from Indiana. My parents moved to California when I was 11, so I got my first skateboard right before the urethane era. I was skating the hills of Poway, and then we moved to Solana Beach and I started skating La Costa in the summer of ‘76. I was a La Costa kid skating in the hills up there, so my skateboarding background comes from that era, the downhill slalom racing and downhilling era.

When did you start picking up a camera?
When I was 13, I took a black and white photography class at Earl Warren Junior High School. It was a basic Photography 101 class. Then my dad and I built a darkroom in our house, so I started printing photos. Once I got to high school, I started working on the school paper and had a darkroom for four years at the school paper, so we’d do rock n’ roll photography and stuff like that.

That’s really great. You started as a kid, so you had that eye. You didn’t have all that stuff in your head about what a photograph is supposed to be.
What I thought a photograph should be was from looking at a Skateboarder magazine, and that was, basically, Craig Stecyk. My vision of my photography starts at Stecyk. He was the first photographer I looked at. When I was a kid, there was Mathew Brady from the Civil War photos, but Stecyk was shooting skateboarding at the time, and his gritty black and white photojournalism thing was a huge influence on me. I met Craig in 1988 when I was working for Powell, so my base comes from that era.

So you liked more of an action shot with a gritty feel?
Yeah. Stecyk would shoot Paul Constantineau and those guys on the streets of Venice with vato guys and stuff. It was very urban, before everyone was even into that. That was a huge influence on me when I started doing black and white photography.s

Interesting. Most people start out later and you started seeing something you loved and translated it onto film.
Yeah. I think you learn pre-visualization. That’s a tool that when you think something in your mind and make it come to fruition on paper or film. My dad was an electronic engineer and he was a photographer when he was younger. My dad’s a visionary. I got that knack for pre-visualization from him, so I can imagine something and make it come to fruition. Usually, when I take photographs, I pretty much know what it’s going to look like before I even shoot it.

One thing I like about making art is that sometimes there’s an accident that happens that takes you down a different road that you didn’t visualize and then I become part of that active creation, which is kind of exciting.
David Carson calls it ‘beautiful accidents’ and I think that’s really true, especially with photography when you start slowing shutter speeds down. I always say you learn all the rules and then you learn to break them. I think that’s where the magic comes about with art, photography and stuff like that. When I worked with Carson back in the Beach Culture days, he really opened my eyes in almost a psychedelic way of just looking at things differently, and looking for the more abstract. The imperfection makes things special because perfection in life is boring.