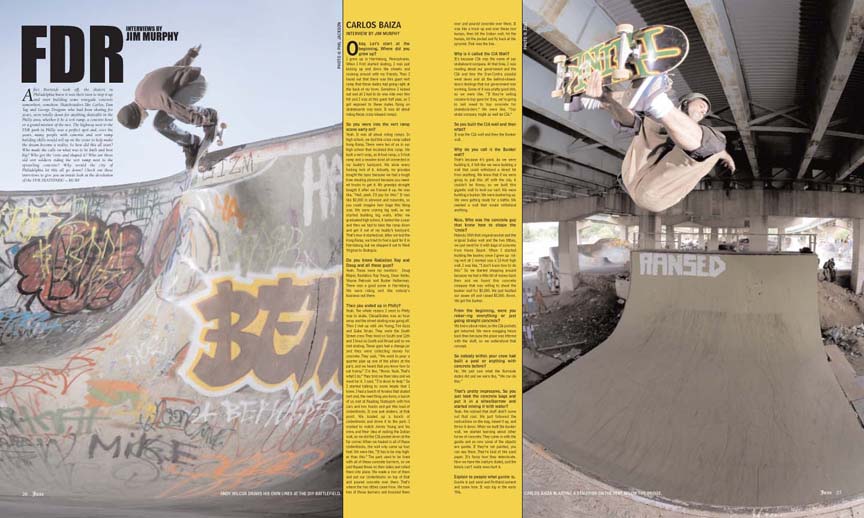 After Burnside took off, the skaters in Philadelphia knew it was their turn to step it up and start building some renegade concrete somewhere, somehow. Skateboarders like Carlos, Dan Tag and George Draguns who had been skating for years, were totally down for anything skateable in the Philly area, whether it be a vert ramp, a concrete bowl or a grand mixture of the two. The highway next to the FDR park in Philly was a perfect spot and, over the years, many people with concrete and vert ramp building skills would roll up on the scene to help make the dream become a reality. So how did this all start? Who made the calls on what was to be built and how big? Who got the ‘crete and shaped it? Who are those old vert soldiers riding the vert ramp next to the sprawling concrete? Why would the city of Philadelphia let this all go down? Check out these interviews to give you an inside look at the devolution of the FDR SKATEPARK! – MURF

“So many different crews popped up and there were multiple crews at different points in time. It was amazing to see this thing grow. So many good people showed up and worked on it. I would like to think that we made up a crazy way to build things. We built some quarter pipes and some walls. Nobody but crazy skaters could come up with this stuff.”

Okay. Let’s start at the beginning. Where did you grow up?
I grew up in Harrisburg, Pennsylvania. When I first started skating, I was just kicking up and down the streets and cruising around with my friends. Then I found out that there was this giant vert ramp that these dudes had going right at the back of my town. Somehow I lucked out and all I had to do was ride over this hill and I was at this giant half pipe, so I got exposed to these dudes flying on skateboards way back. It was all about riding these crazy-shaped ramps.

So you were into the vert ramp scene early on?
Yeah. It was all about riding ramps. In high school, we had this crazy ramp called Kong Ramp. There were ten of us in our high school that localized this ramp. We built a vert ramp, an 8-foot ramp, a 5-foot ramp and a wooden bowl all connected in my buddy’s backyard. We stole every fucking inch of it. Actually, my grandpa bought the layer because we had a tough time stealing plywood because you needed trucks to get it. My grandpa straight bought it after we framed it up. He was like, “Hell, yeah. I’ll pay for this.” It was like $2,000 in plywood and masonite, so you could imagine how huge this thing was. We were craving big wall, so we started building big walls. After we graduated high school, it lasted like a year and then we had to take the ramp down and get it out of my buddy’s backyard. That’s how it started out. After we lost the Kong Ramp, we tried to find a spot for it in Harrisburg, but we shipped it out to West Virginia to Skatopia.

Do you know Radiation Ray and Doug and all those guys?
Yeah. Those were my mentors: Doug Mayer, Radiation Ray Young, Dean Keller, Wayne Petroski and Buster Halterman. There was a good scene in Harrisburg. We were riding vert like nobody’s business out there.

Then you ended up in Philly?
Yeah. The whole reason I went to Philly was to skate. CheapSkates was an hour away and the street skating was going off. Then I met up with Jim Young, Tim Guza and Gabe Strain. They were the South Street crew. They lived on South and 11th and I lived on South and Broad and so we met skating. Those guys had a change jar and they were collecting money for concrete. They said, “We want to pour a quarter pipe up one of the pillars at the park, and we heard that you know how to cut tranny.” I’m like, “Boom. Yeah. That’s what I do.” They told me their idea and we went for it. I said, “I’m down to help.” So I started talking to some heads that I knew. I had a bunch of homies that skated vert and, the next thing you know, a bunch of us met at Reading Skatepark with five cars and two trucks and got this load of cinder blocks. It was just skaters, at that point. We loaded up a bunch of cinder blocks and drove it to the park. I wanted to match Jimmy Young and his crew, and their idea of making the Indian wall, so we did the CIA pocket down at the far corner. When we hauled in all of these cinder blocks, the wall only came up four feet. We were like, “It has to be way higher than this.” The park used to be lined with all of these concrete barriers, so we just flipped those on their sides and rolled them into place. We made a row of them and put our cinder blocks on top of that and poured concrete over them. That’s where the two titties came from. We took two of those barriers and knocked them over and poured concrete over them. It was like a track up and over these two humps, then hit the Indian wall, hit the humps, hit the pocket and fly back at the pyramid. That was the line.

FOR THE REST OF THE STORY, ORDER ISSUE #69 BY CLICKING HERE.