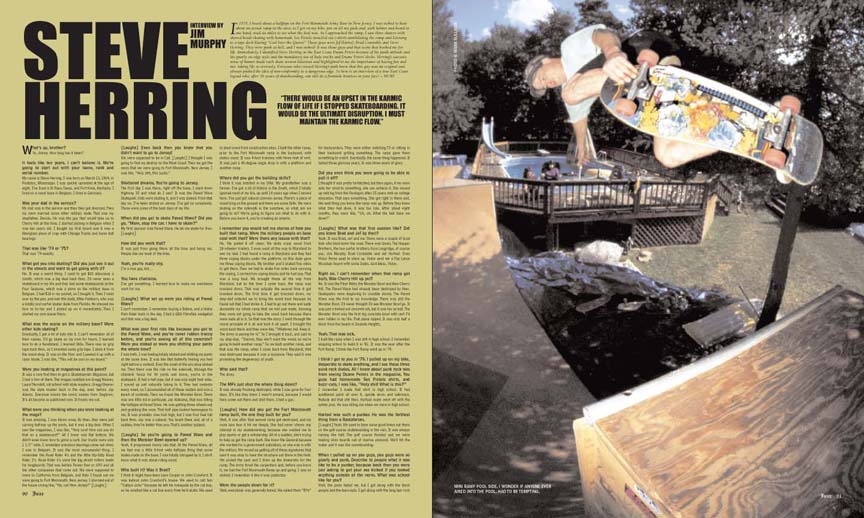 In 1979, I heard about a halfpipe on the Fort Monmouth Army Base in New Jersey. I was stoked to hear about an actual ramp in the area, so I got on my bike, put on all my pads and, with helmet and board in one hand, road six miles to see what the deal was. As I approached the ramp, I saw three skaters with shaved heads skating with homemade Sex Pistols stenciled out t-shirts annihilating the ramp and listening to a tape deck blaring “God Save the Queen!” Those guys were Jef Hartsel, Brad Constable and Steve Herring. They were punk as hell, and I was stoked! It was those guys and that scene that hooked me for life. Immediately, I identified Steve Herring as the East Coast Duane Peters because of his punk attitude and his gnarly on edge style and the mandatory use of Indy trucks and Duane Peters’ decks. Herring’s sarcastic sense of humor made each skate session hilarious and highlighted to me the importance of having fun and not taking life so seriously. Everyone who crossed Herring’s path knew that this guy was an original and always pushed the idea of non-conformity to a dangerous edge. So here is an interview of a true East Coast legend who, after 36 years of skateboarding, can still do a frontside boneless in your face!

“Don’t do it to be cool. If you’re doing it to be cool and because your friends are doing it, do skateboarding a favor and buy a pair of fuckin’ rollerblades. Whatever happens to you is part of your life.”

What’s up, brother?
Yo, Jimmy. How long has it been?

It feels like ten years. I can’t believe it. We’re going to start out with your name, rank and serial number.
My name is Steve Herring. I was born on March 13, 1964, in Pontotoc, Mississippi. I was quickly uprooted at the age of eight. I’ve lived in El Paso, Texas, and Fort Knox, Kentucky. I lived on a naval base in Belgium. I lived in Germany.

Was your dad in the service?
My dad was in the service and then they got divorced. Then my mom married some other military dude. That was my stepfather, Dennis. He was the guy that would take us to Cherry Hill all the time. I started skating in Belgium when I was ten years old. I bought my first board and it was a fiberglass piece of crap with Chicago Trucks and loose ball bearings.

What got you into skating? Did you just see it out in the streets and want to get going with it?
No. It was a weird thing. I used to get $20 allowance a month, which was a big deal back then. I’d never seen a skateboard in my life and they had some skateboards at the Four Seasons, which was a store on the military base in Belgium. I had $18 in my pocket, so I bought it. Then I went over by the pier, and met this dude, Mike Fishburn, who was a totally cool surfer skater dude from Florida. He showed me how to tic-tac and I picked up on it immediately. Then I started my own scene there.

What was the scene on the military base? Were other kids skating?
Eventually, I got a lot of kids into it. I can’t remember all of their names. I’d go skate on my own for hours. I learned how to do a handstand. I learned 360s. There was no grip tape back then, so I invented some grip tape. I stole it from the wood shop. It was on the floor and I peeled it up with a razor blade. I was like, “This will be cool on my board.”

Were you looking at magazines at this point?
It was a rare find then to get a Skateboarder Magazine, but I had a few of them. The images instilled are Gregg Weaver, Laura Thornhill, old school with style masters. Gregg Weaver was the style master back in the day, even before Jay Adams. Everyone knows the iconic names from Dogtown. It’s all become so publicized now. It freaks me out.

What were you thinking when you were looking at the mags?
It was amazing. I was blown away. By then, they were just carving halfway up the pools, but it was a big deal. When I saw the magazines, I was like, “Holy cow! How can you do that on a skateboard?” All I knew was flat bottom. We didn’t even know how to grind a curb. Our trucks were only 1 1/2” wide. I remember precision bearings came out when I was in Belgium. It was the most monumental thing. I remember the Road Rider 4’s and the little itty-bitty Road Rider 2’s. Road Rider 6’s were the big street rollers made for longboards. That was before Power Paw or UFO and all the other companies that came out. We were supposed to move to California from Belgium, and then I found out we were going to Fort Monmouth, New Jersey. I stormed out of the house crying like, “No, not New Jersey!” [Laughs]

[Laughs] Even back then you knew that you didn’t want to go to Jersey!
We were supposed to be in Cali. [Laughs] I thought I was going to find my destiny on the West Coast. Then we got the news that we were going to Fort Monmouth, New Jersey. I was like, “Holy shit, this sucks.”

Shattered dreams. You’re going to Jersey.
The first day I was there, right off the base, I went down Highway 35 and what do I see? It was the Paved Wave Skatepark. Kids were skating it, and I was stoked. From that day on, I’ve been stoked on Jersey. I’ve got no complaints. Those were some of the best days of my life.