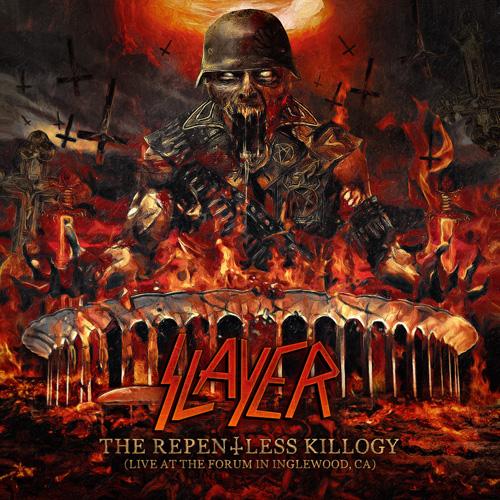 What you see is what you get and we can’t get enough… The time is now to get your tickets to Slayer’s Final Campaign, the last leg of its Final World Tour!

If there is any doubt that Slayer will be sorely missed once the band performs the last show of its Final World Tour on Saturday, November 30, then check out the beginning of the band’s concert, Slayer’s entrance on stage, and opening song, “Repentless.”

Taken from the upcoming two-part “Slayer: The Relentless Killogy” motion picture and companion LP/CD release “Live At The Forum in Inglewood, CA” due out November 8 (Nuclear Blast), this is just a demonstrable taste of why Slayer has been one of the most influential thrash/punk/metal bands of the last 35-plus years, why an up-and-coming rock band’s professional “rite of passage” is simply surviving an entire Slayer tour as the opening band, and why Slayer’s live shows are “must-see events.”

Directed by Wayne Isham who has worked with artists including Metallica, Foo Fighters, and Michael Jackson, Part Two of “Slayer:  The Relentless Killogy, “Live At The Forum in Inglewood, CA” is Slayer’s entire 90-minute live set filmed at the Los Angeles Forum on August 5, 2017, and showcases the spectacular pyrotechnic stage show for what has been cited as Slayer’s finest tour production.

Part One of “Slayer:  The Repentless Killogy” motion picture was written and directed by BJ McDonnell who conceived and directed the three brutal music videos – “You Against You,” “Repentless,” and “Pride in Prejudice” – for Slayer’s final studio album, 2015’s Repentless.

Encompassing revenge, murder, bloodshed and retribution, the “Repentless Killogy” short film opens with the three music videos assembled as one chronological storyline and stars many of the actors who appeared in the original video series, including Jason Trost (“Hatchet III”) who stars as “Wyatt,” and Danny Trejo (“From Dusk Till Dawn”).

Los Angeles artist Blake Armstrong of Spaceboycomics created the cover art for the Blu-ray, and the art for the vinyl and CD was designed by Brazilian artist Marcelo Vasco.

Pre-order  “Slayer:  The Repentless Killogy (Live at the Forum in Inglewood, CA”) HERE and receive an instant download of the single “Relentless” (live.”

The single is also available on all streaming services. Listen now at https://geni.us/SlayerKillogy.

Slayer will begin The Final Campaign, the last leg of its Final World Tour, on November 2, wrapping up its touring career with two shows at The Forum in Los Angeles on November 29 and 30. Tickets and VIP Meet N Greet Upgrades are available at www.slayer.net.  All remaining dates are below.

For nearly four decades, Slayer’s onslaught has proven them to be the supreme thrash-metal band on the planet, the band that other heavy acts are measured against and aspire to. Their membership in “The Big Four” – Metallica, Slayer, Megadeth and Anthrax – the four bands that defined the thrash/metal genre – secures the band’s place in music history.

The five-time nominated, two-time GRAMMY-winners have accumulated an abundance of certified Gold albums along with “Best…” awards from media outlets all over the world, including Kerrang!, SPIN, Metal Hammer, Revolver, and Esquire.

Throughout Slayer’s history, the band has never faltered in unleashing its extreme and focused sonic assault, and, unlike many of its contemporaries who commercialized their sound, Slayer has remained crushing and brutal, steadfastly refusing to cater to the mainstream.

Slayer’s founding member, guitarist Jeff Hanneman passed in 2013, and Exodus guitarist Gary Holt has been filling in for him since.  Paul Bostaph, who was Slayer’s drummer from ’94 – ’01, rejoined bassist/vocalist Tom Araya and guitarist Kerry King in 2013, and is back behind the kit to the end.

In January 2018, Slayer announced they were calling it a day and would be doing one final world tour to thank its fans for their support over the years.  Launched on May 10, 2018, by the time the 18-month tour wraps, Slayer will have said goodbye to fans in 30 countries around the world and in 40 U.S. states by the time the last date is played on Saturday, November 30 in the band’s hometown of Southern California.