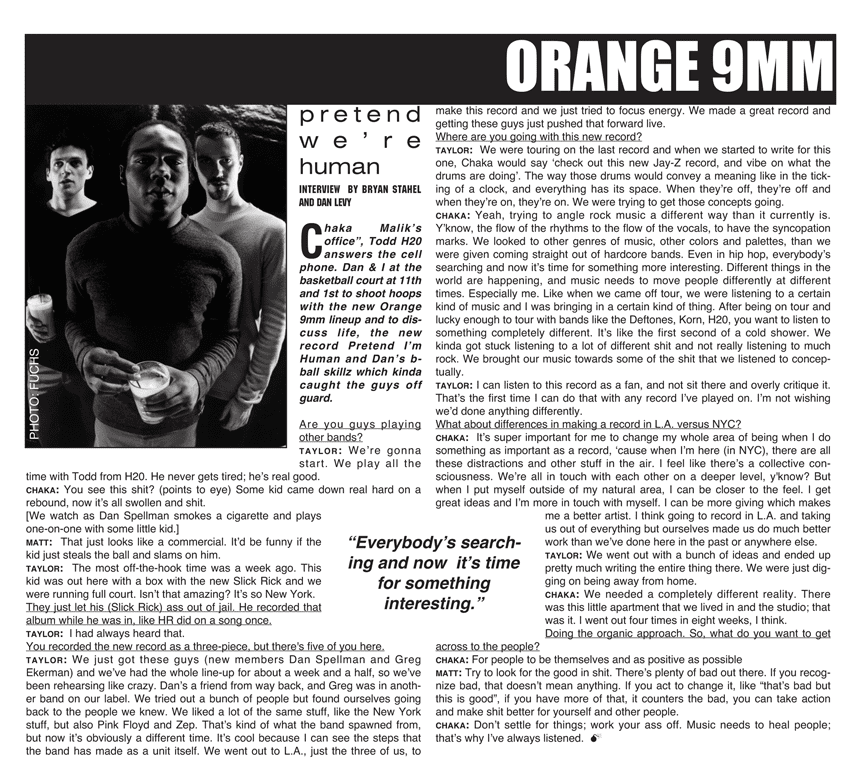 “Chaka Malik’s office,” Todd H20 answers the cell phone. Dan and I are at the basketball court at 11th and 1st to shoot hoops with the new Orange 9mm lineup and to discuss life, the new record “Pretend I’m Human” and Dan’s b-ball skillz, which kinda caught the guys off guard.

Are you guys playing other bands?
Taylor: We’re gonna start. We play all the time with Todd from H20. He never gets tired; he’s real good.
Chaka: You see this shit? (points to eye) Some kid came down real hard on a rebound, now it’s all swollen and shit.
[We watch as Dan Spellman smokes a cigarette and plays one-on-one with some little kid.]

“Everybody’s searching and now it’s time for something interesting.”

Matt:  That just looks like a commercial. It’d be funny if the kid just steals the ball and slams on him.
Taylor:  The most off-the-hook time was a week ago. This kid was out here with a box with the new Slick Rick and we were running full court. Isn’t that amazing? It’s so New York.

They just let his (Slick Rick) ass out of jail. He recorded that album while he was in, like HR did on a song once.
Taylor:  I had always heard that.

You recorded the new record as a three-piece, but there’s five of you here.
Taylor: We just got these guys (new members Dan Spellman and Greg Ekerman) and we’ve had the whole line-up for about a week and a half, so we’ve been rehearsing like crazy. Dan’s a friend from way back, and Greg was in another band on our label. We tried out a bunch of people but found ourselves going back to the people we knew. We liked a lot of the same stuff, like the New York stuff, but also Pink Floyd and Zep. That’s kind of what the band spawned from, but now it’s obviously a different time. It’s cool because I can see the steps that the band has made as a unit itself. We went out to L.A., just the three of us, to make this record and we just tried to focus energy. We made a great record and getting these guys just pushed that forward live.

Where are you going with this new record?
Taylor:  We were touring on the last record and when we started to write for this one, Chaka would say ‘check out this new Jay-Z record, and vibe on what the drums are doing’. The way those drums would convey a meaning like in the ticking of a clock, and everything has its space. When they’re off, they’re off and when they’re on, they’re on. We were trying to get those concepts going.

Chaka: Yeah, trying to angle rock music a different way than it currently is. Y’know, the flow of the rhythms to the flow of the vocals, to have the syncopation marks. We looked to other genres of music, other colors and palettes, than we were given coming straight out of hardcore bands. Even in hip hop, everybody’s searching and now it’s time for something more interesting. Different things in the world are happening, and music needs to move people differently at different times. Especially me. Like when we came off tour, we were listening to a certain kind of music and I was bringing in a certain kind of thing. After being on tour and lucky enough to tour with bands like the Deftones, Korn, H20, you want to listen to something completely different. It’s like the first second of a cold shower. We kinda got stuck listening to a lot of different shit and not really listening to much rock. We brought our music towards some of the shit that we listened to conceptually.

Taylor: I can listen to this record as a fan, and not sit there and overly critique it. That’s the first time I can do that with any record I’ve played on. I’m not wishing we’d done anything differently.

What about differences in making a record in L.A. versus NYC?
Chaka:  It’s super important for me to change my whole area of being when I do something as important as a record, ‘cause when I’m here (in NYC), there are all these distractions and other stuff in the air. I feel like there’s a collective consciousness. We’re all in touch with each other on a deeper level, y’know? But when I put myself outside of my natural area, I can be closer to the feel. I get great ideas and I’m more in touch with myself. I can be more giving which makes me a better artist. I think going to record in L.A. and taking us out of everything but ourselves made us do much better work than we’ve done here in the past or anywhere else.

Taylor: We went out with a bunch of ideas and ended up pretty much writing the entire thing there. We were just digging on being away from home.

Chaka: We needed a completely different reality. There was this little apartment that we lived in and the studio; that was it. I went out four times in eight weeks, I think.

Doing the organic approach. So, what do you want to get across to the people?
Chaka: For people to be themselves and as positive as possible

Matt: Try to look for the good in shit. There’s plenty of bad out there. If you recognize bad, that doesn’t mean anything. If you act to change it, like “that’s bad but this is good”, if you have more of that, it counters the bad, you can take action and make shit better for yourself and other people.
chaka: Don’t settle for things; work your ass off. Music needs to heal people; that’s why I’ve always listened.