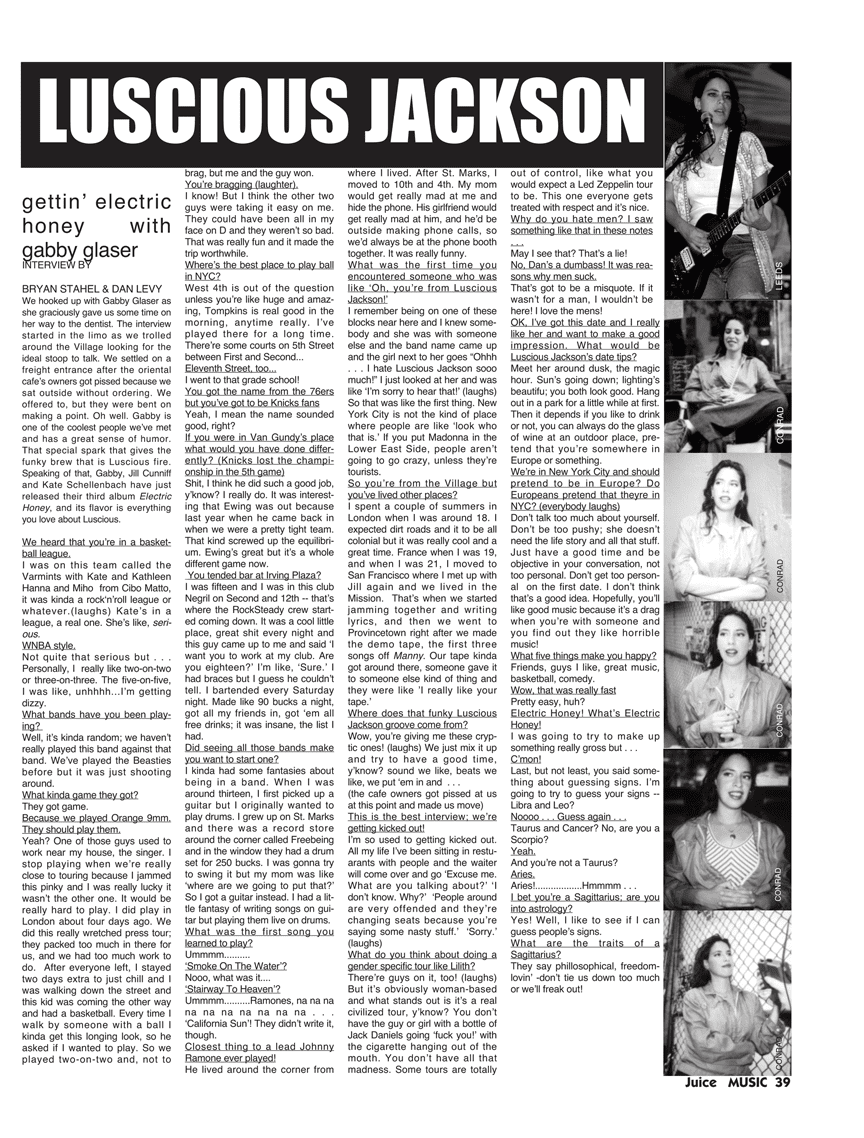 We hooked up with Gabby Glaser as she graciously gave us some time on her way to the dentist. The interview started in the limo as we trolled around the Village looking for the ideal stoop to talk. We settled on a freight entrance after the oriental cafe’s owners got pissed because we sat outside without ordering. We offered to, but they were bent on making a point. Oh well. Gabby is one of the coolest people we’ve met and has a great sense of humor. That special spark that gives the funky brew that is Luscious fire.  Speaking of that, Gabby, Jill Cunniff and Kate Schellenbach have just released their third album Electric Honey, and its flavor is everything you love about Luscious.

We heard that you’re in a basketball league.
I was on this team called the Varmints with Kate and Kathleen Hanna and Miho  from Cibo Matto, it was kinda a rock‘n’roll league or whatever.(laughs) Kate’s in a league, a real one. She’s like, serious.

WNBA style.
Not quite that serious but . . . Personally, I  really like two-on-two or three-on-three. The five-on-five, I was like, unhhhh…I’m getting dizzy.

What bands have you been playing?
Well, it’s kinda random; we haven’t really played this band against that band. We’ve played the Beasties before but it was just shooting around.

What kinda game they got?
They got game.

Because we played Orange 9mm. They should play them.
Yeah? One of those guys used to work near my house, the singer. I stop playing when we’re really close to touring because I jammed this pinky and I was really lucky it wasn’t the other one. It would be really hard to play. I did play in London about four days ago. We did this really wretched press tour; they packed too much in there for us, and we had too much work to do.  After everyone left, I stayed two days extra to just chill and I was walking down the street and this kid was coming the other way and had a basketball. Every time I walk by someone with a ball I kinda get this longing look, so he asked if I wanted to play. So we played two-on-two and, not to brag, but me and the guy won.

You’re bragging (laughter).
I know! But I think the other two guys were taking it easy on me. They could have been all in my face on D and they weren’t so bad. That was really fun and it made the trip worthwhile.

Where’s the best place to play ball in NYC?
West 4th is out of the question unless you’re like huge and amazing, Tompkins is real good in the morning, anytime really. I’ve played there for a long time. There’re some courts on 5th Street between First and Second…

Eleventh Street, too…
I went to that grade school!

You got the name from the 76ers but you’ve got to be Knicks fans
Yeah, I mean the name sounded good, right?

If you were in Van Gundy’s place what would you have done differently? (Knicks lost the championship in the 5th game)
Shit, I think he did such a good job, y’know? I really do. It was interesting that Ewing was out because last year when he came back in when we were a pretty tight team. That kind screwed up the equilibrium. Ewing’s great but it’s a whole different game now.

You tended bar at Irving Plaza?
I was fifteen and I was in this club Negril on Second and 12th — that’s where the RockSteady crew started coming down. It was a cool little place, great shit every night and this guy came up to me and said ‘I want you to work at my club. Are you eighteen?’ I’m like, ‘Sure.’ I had braces but I guess he couldn’t tell. I bartended every Saturday night. Made like 90 bucks a night, got all my friends in, got ‘em all free drinks; it was insane, the list I had.

Did seeing all those bands make you want to start one?
I kinda had some fantasies about being in a band. When I was around thirteen, I first picked up a guitar but I originally wanted to play drums. I grew up on St. Marks and there was a record store around the corner called Freebeing and in the window they had a drum set for 250 bucks. I was gonna try to swing it but my mom was like ‘where are we going to put that?’ So I got a guitar instead. I had a little fantasy of writing songs on guitar but playing them live on drums.

What was the first song you learned to play?
Ummmm……….

What was the first time you encountered someone who was like ‘Oh, you’re from Luscious Jackson!’
I remember being on one of these blocks near here and I knew somebody and she was with someone else and the band name came up and the girl next to her goes “Ohhh . . . I hate Luscious Jackson sooo much!” I just looked at her and was like ‘I’m sorry to hear that!’ (laughs) So that was like the first thing. New York City is not the kind of place where people are like ‘look who that is.’ If you put Madonna in the Lower East Side, people aren’t going to go crazy, unless they’re tourists.

So you’re from the Village but you’ve lived other places?
I spent a couple of summers in London when I was around 18. I expected dirt roads and it to be all colonial but it was really cool and a great time. France when I was 19, and when I was 21, I moved to San Francisco where I met up with Jill again and we lived in the Mission.  That’s when we started jamming together and writing lyrics, and then we went to Provincetown right after we made the demo tape, the first three songs off Manny. Our tape kinda got around there, someone gave it to someone else kind of thing and they were like ’I really like your tape.’

Where does that funky Luscious Jackson groove come from?
Wow, you’re giving me these cryptic ones! (laughs) We just mix it up and try to have a good time, y’know? sound we like, beats we like, we put ‘em in and  . . .

This is the best interview; we’re getting kicked out!
I’m so used to getting kicked out. All my life I’ve been sitting in restuarants with people and the waiter will come over and go ‘Excuse me. What are you talking about?’ ‘I don’t know. Why?’  ‘People around are very offended and they’re changing seats because you’re saying some nasty stuff.’  ‘Sorry.’ (laughs)

What do you think about doing a gender specific tour like Lilith?
There’re guys on it, too! (laughs) But it’s obviously woman-based and what stands out is it’s a real civilized tour, y’know? You don’t have the guy or girl with a bottle of Jack Daniels going ‘fuck you!’ with the cigarette hanging out of the mouth. You don’t have all that madness. Some tours are totally out of control, like what you would expect a Led Zeppelin tour to be. This one everyone gets treated with respect and it’s nice.

Why do you hate men? I saw something like that in these notes . . .
May I see that? That’s a lie!

No, Dan’s a dumbass! It was reasons why men suck.
That’s got to be a misquote. If it wasn’t for a man, I wouldn’t be here! I love the mens!

OK, I’ve got this date and I really like her and want to make a good impression. What would be Luscious Jackson’s date tips?
Meet her around dusk, the magic hour. Sun’s going down; lighting’s beautifu; you both look good. Hang out in a park for a little while at first. Then it depends if you like to drink or not, you can always do the glass of wine at an outdoor place, pretend that you’re somewhere in Europe or something.

We’re in New York City and should pretend to be in Europe? Do Europeans pretend that they’re in NYC? (everybody laughs)
Don’t talk too much about yourself. Don’t be too pushy; she doesn’t need the life story and all that stuff. Just have a good time and be objective in your conversation, not too personal. Don’t get too personal  on the first date. I don’t think that’s a good idea. Hopefully, you’ll like good music because it’s a drag when you’re with someone and you find out they like horrible music!