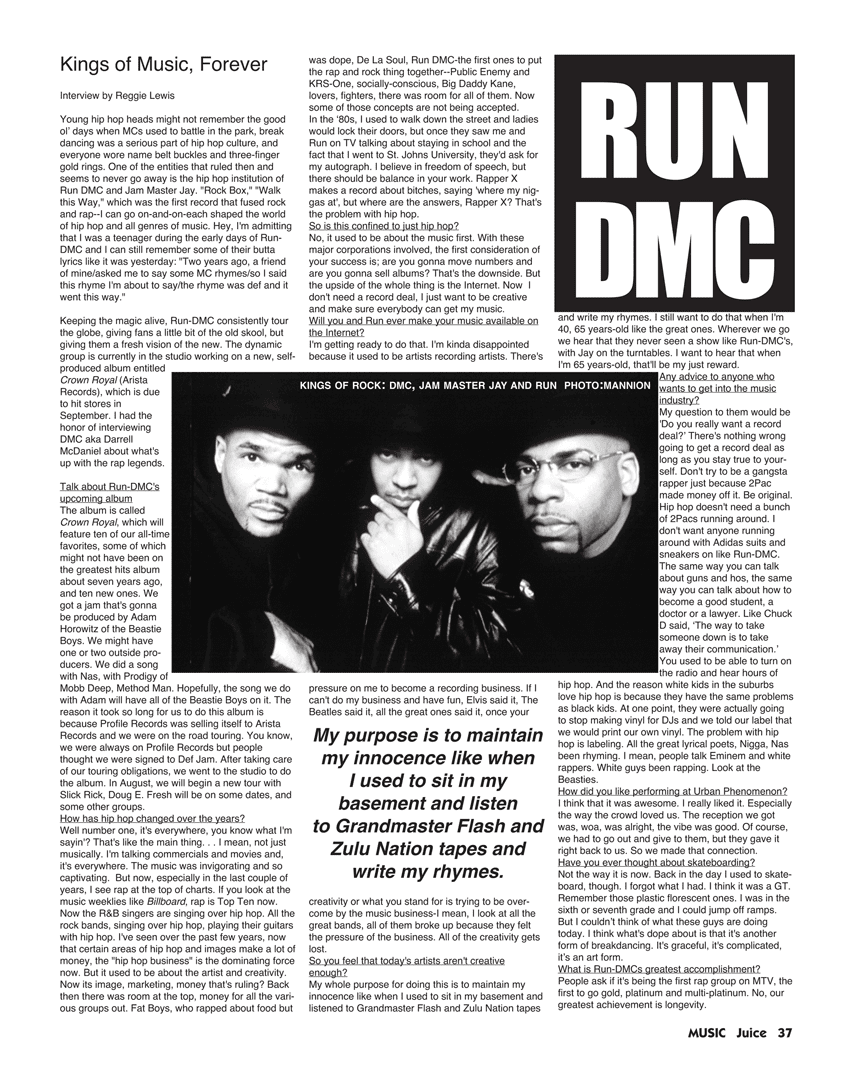 Young hip hop heads might not remember the good ol’ days when MCs used to battle in the park, break dancing was a serious part of hip hop culture, and everyone wore name belt buckles and three-finger gold rings. One of the entities that ruled then and seems to never go away is the hip hop institution of Run DMC and Jam Master Jay. “Rock Box,” “Walk this Way,” which was the first record that fused rock and rap–I can go on-and-on-each shaped the world of hip hop and all genres of music. Hey, I’m admitting that I was a teenager during the early days of Run-DMC and I can still remember some of their butta lyrics like it was yesterday: “Two years ago, a friend of mine/asked me to say some MC rhymes/so I said this rhyme I’m about to say/the rhyme was def and it went this way.”

Keeping the magic alive, Run-DMC consistently tour the globe, giving fans a little bit of the old skool, but giving them a fresh vision of the new. The dynamic group is currently in the studio working on a new, self-produced album entitled Crown Royal (Arista Records), which is due to hit stores in September. I had the honor of interviewing DMC aka Darrell McDaniel about what’s up with the rap legends.

Talk about Run-DMC’s upcoming album
The album is called Crown Royal, which will feature ten of our all-time favorites, some of which might not have been on the greatest hits album about seven years ago, and ten new ones. We got a jam that’s gonna be produced by Adam Horowitz of the Beastie Boys. We might have one or two outside producers. We did a song with Nas, with Prodigy of Mobb Deep, Method Man. Hopefully, the song we do with Adam will have all of the Beastie Boys on it. The reason it took so long for us to do this album is because Profile Records was selling itself to Arista Records and we were on the road touring. You know, we were always on Profile Records but people thought we were signed to Def Jam. After taking care of our touring obligations, we went to the studio to do the album. In August, we will begin a new tour with Slick Rick, Doug E. Fresh will be on some dates, and some other groups.

“My purpose is to maintain my innocence like when I used to sit in my basement and listen to Grandmaster Flash and Zulu Nation tapes and write my rhymes.”

How has hip hop changed over the years?
Well number one, it’s everywhere, you know what I’m sayin’? That’s like the main thing. . . I mean, not just musically. I’m talking commercials and movies and, it’s everywhere. The music was invigorating and so captivating.  But now, especially in the last couple of years, I see rap at the top of charts. If you look at the music weeklies like Billboard, rap is Top Ten now. Now the R&B singers are singing over hip hop. All the rock bands, singing over hip hop, playing their guitars with hip hop. I’ve seen over the past few years, now that certain areas of hip hop and images make a lot of money, the “hip hop business” is the dominating force now. But it used to be about the artist and creativity. Now its image, marketing, money that’s ruling? Back then there was room at the top, money for all the various groups out. Fat Boys, who rapped about food but was dope, De La Soul, Run DMC-the first ones to put the rap and rock thing together–Public Enemy and KRS-One, socially-conscious, Big Daddy Kane, lovers, fighters, there was room for all of them. Now some of those concepts are not being accepted. In the ‘80s, I used to walk down the street and ladies would lock their doors, but once they saw me and Run on TV talking about staying in school and the fact that I went to St. Johns University, they’d ask for my autograph. I believe in freedom of speech, but there should be balance in your work. Rapper X makes a record about bitches, saying ‘where my niggas at’, but where are the answers, Rapper X? That’s the problem with hip hop.

So is this confined to just hip hop?
No, it used to be about the music first. With these major corporations involved, the first consideration of your success is; are you gonna move numbers and are you gonna sell albums? That’s the downside. But the upside of the whole thing is the Internet. Now  I don’t need a record deal, I just want to be creative and make sure everybody can get my music.

Will you and Run ever make your music available on the Internet?
I’m getting ready to do that. I’m kinda disappointed because it used to be artists recording artists. There’s pressure on me to become a recording business. If I can’t do my business and have fun, Elvis said it, The Beatles said it, all the great ones said it, once your creativity or what you stand for is trying to be overcome by the music business-I mean, I look at all the great bands, all of them broke up because they felt the pressure of the business. All of the creativity gets lost.

So you feel that today’s artists aren’t creative enough?
My whole purpose for doing this is to maintain my innocence like when I used to sit in my basement and listened to Grandmaster Flash and Zulu Nation tapes and write my rhymes. I still want to do that when I’m 40, 65 years-old like the great ones. Wherever we go we hear that they never seen a show like Run-DMC’s, with Jay on the turntables. I want to hear that when I’m 65 years-old, that’ll be my just reward.

Any advice to anyone who wants to get into the music industry?
My question to them would be ‘Do you really want a record deal?’ There’s nothing wrong going to get a record deal as long as you stay true to yourself. Don’t try to be a gangsta rapper just because 2Pac made money off it. Be original. Hip hop doesn’t need a bunch of 2Pacs running around. I don’t want anyone running around with Adidas suits and sneakers on like Run-DMC. The same way you can talk about guns and hos, the same way you can talk about how to become a good student, a doctor or a lawyer. Like Chuck D said, ‘The way to take someone down is to take away their communication.’ You used to be able to turn on the radio and hear hours of hip hop. And the reason white kids in the suburbs love hip hop is because they have the same problems as black kids. At one point, they were actually going to stop making vinyl for DJs and we told our label that we would print our own vinyl. The problem with hip hop is labeling. All the great lyrical poets, Nigga, Nas been rhyming. I mean, people talk Eminem and white rappers. White guys been rapping. Look at the Beasties.

How did you like performing at Urban Phenomenon?
I think that it was awesome. I really liked it. Especially the way the crowd loved us. The reception we got was, woa, was alright, the vibe was good. Of course, we had to go out and give to them, but they gave it right back to us. So we made that connection.

Have you ever thought about skateboarding?
Not the way it is now. Back in the day I used to skateboard, though. I forgot what I had. I think it was a GT. Remember those plastic florescent ones. I was in the sixth or seventh grade and I could jump off ramps. But I couldn’t think of what these guys are doing today. I think what’s dope about is that it’s another form of breakdancing. It’s graceful, it’s complicated, it’s an art form.

What is Run-DMCs greatest accomplishment?
People ask if it’s being the first rap group on MTV, the first to go gold, platinum and multi-platinum. No, our greatest achievement is longevity.