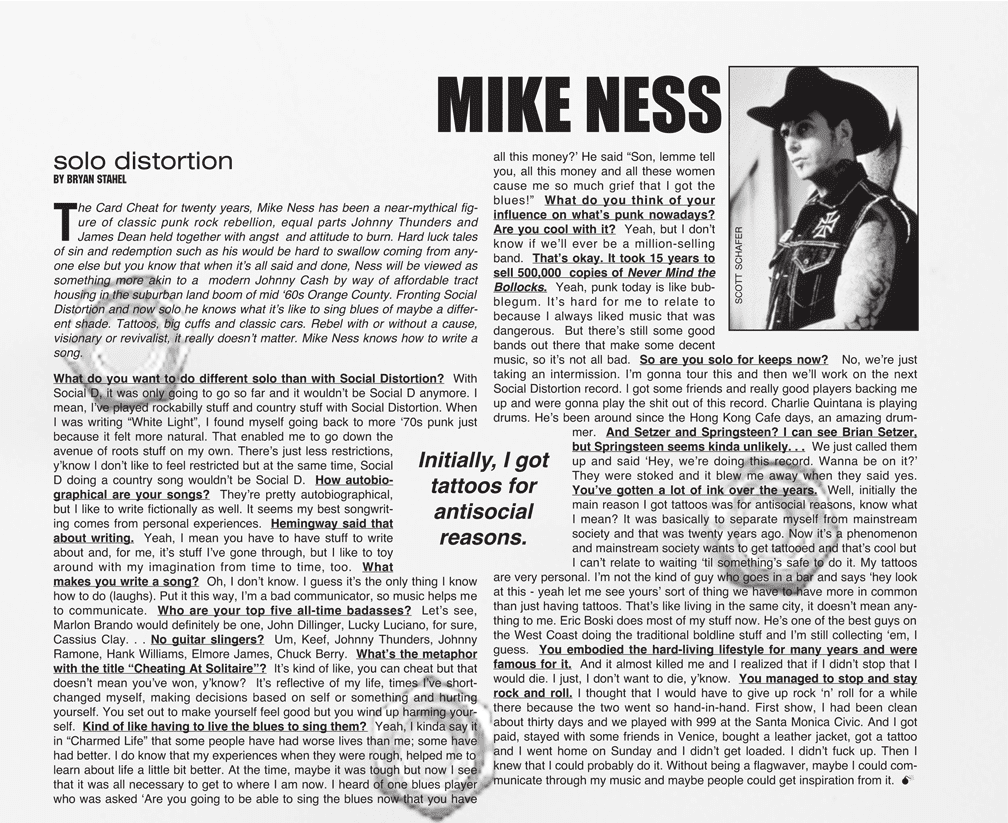 The Card Cheat for twenty years, Mike Ness has been a near-mythical figure of classic punk rock rebellion, equal parts Johnny Thunders and James Dean held together with angst and attitude to burn. Hard luck tales of sin and redemption such as his would be hard to swallow coming from anyone else but you know that when it’s all said and done, Ness will be viewed as something more akin to a modern Johnny Cash by way of affordable tract housing in the suburban land boom of mid ‘60s Orange County. Fronting Social Distortion and now solo he knows what it’s like to sing blues of maybe a different shade. Tattoos, big cuffs and classic cars. Rebel with or without a cause, visionary or revivalist, it really doesn’t matter. Mike Ness knows how to write a song.

What do you want to do different solo than with Social Distortion?
With Social D, it was only going to go so far and it wouldn’t be Social D anymore. I mean, I’ve played rockabilly stuff and country stuff with Social Distortion. When I was writing “White Light”, I found myself going back to more ‘70s punk just because it felt more natural. That enabled me to go down the avenue of roots stuff on my own. There’s just less restrictions, y’know I don’t like to feel restricted but at the same time, Social D doing a country song wouldn’t be Social D.

How autobiographical are your songs?
They’re pretty autobiographical, but I like to write fictionally as well. It seems my best songwriting comes from personal experiences. Hemingway said that about writing. Yeah, I mean you have to have stuff to write about and, for me, it’s stuff I’ve gone through, but I like to toy around with my imagination from time to time, too.

What makes you write a song?
Oh, I don’t know. I guess it’s the only thing I know how to do (laughs). Put it this way, I’m a bad communicator, so music helps me to communicate.

Who are your top five all-time badasses?
Let’s see, Marlon Brando would definitely be one, John Dillinger, Lucky Luciano, for sure, Cassius Clay. . .

What’s the metaphor with the title “Cheating At Solitaire”?
It’s kind of like, you can cheat but that doesn’t mean you’ve won, y’know? It’s reflective of my life, times I’ve short-changed myself, making decisions based on self or something and hurting yourself. You set out to make yourself feel good but you wind up harming yourself. Kind of like having to live the blues to sing them? Yeah, I kinda say it in “Charmed Life” that some people have had worse lives than me; some have had better. I do know that my experiences when they were rough, helped me to learn about life a little bit better. At the time, maybe it was tough but now I see that it was all necessary to get to where I am now. I heard of one blues player who was asked ‘Are you going to be able to sing the blues now that you have all this money?’ He said “Son, lemme tell you, all this money and all these women cause me so much grief that I got the blues!”

What do you think of your influence on what’s punk nowadays? Are you cool with it?
Yeah, but I don’t know if we’ll ever be a million-selling band.

That’s okay. It took 15 years to sell 500,000 copies of Never Mind the Bollocks.
Yeah, punk today is like bubblegum. It’s hard for me to relate to because I always liked music that was dangerous. But there’s still some good bands out there that make some decent music, so it’s not all bad.

So are you solo for keeps now?
No, we’re just taking an intermission. I’m gonna tour this and then we’ll work on the next Social Distortion record. I got some friends and really good players backing me up and were gonna play the shit out of this record. Charlie Quintana is playing drums. He’s been around since the Hong Kong Cafe days, an amazing drummer.

And Setzer and Springsteen? I can see Brian Setzer, but Springsteen seems kinda unlikely. . .
We just called them up and said ‘Hey, we’re doing this record. Wanna be on it?’ They were stoked and it blew me away when they said yes.

You’ve gotten a lot of ink over the years.
Well, initially the main reason I got tattoos was for antisocial reasons, know what I mean? It was basically to separate myself from mainstream society and that was 20 years ago. Now it’s a phenomenon and mainstream society wants to get tattooed and that’s cool but I can’t relate to waiting ‘til something’s safe to do it. My tattoos are very personal. I’m not the kind of guy who goes in a bar and says ‘hey look at this – yeah let me see yours’ sort of thing we have to have more in common than just having tattoos. That’s like living in the same city, it doesn’t mean anything to me. Eric Boski does most of my stuff now. He’s one of the best guys on the West Coast doing the traditional bold line stuff and I’m still collecting ‘em, I guess.

You embodied the hard-living lifestyle for many years and were famous for it.
And it almost killed me and I realized that if I didn’t stop that I would die. I just, I don’t want to die, y’know.

You managed to stop and stay rock and roll.
I thought that I would have to give up rock ‘n’ roll for a while there because the two went so hand-in-hand. First show, I had been clean about thirty days and we played with 999 at the Santa Monica Civic. I got paid, stayed with some friends in Venice, bought a leather jacket, got a tattoo and went home on Sunday and I didn’t get loaded. I didn’t fuck up. Then I knew that I could probably do it. Without being a flag waver, maybe I could communicate through my music and maybe people could get inspiration from it.