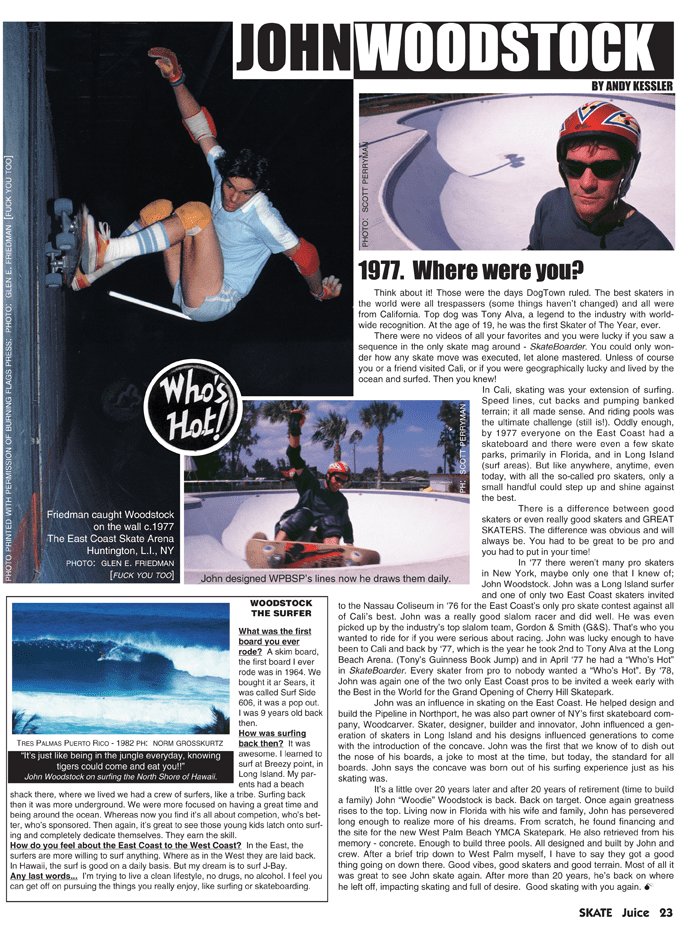 1977.  Where were you?  Think about it! Those were the days DogTown ruled. The best skaters in the world were all trespassers (some things haven’t changed) and all were from California. Top dog was Tony Alva, a legend to the industry with worldwide recognition. At the age of 19, he was the first Skater of The Year, ever.

There were no videos of all your favorites and you were lucky if you saw a sequence in the only skate mag around – SkateBoarder. You could only wonder how any skate move was executed, let alone mastered. Unless of course you or a friend visited Cali, or if you were geographically lucky and lived by the ocean and surfed. Then you knew!

In Cali, skating was your extension of surfing. Speed lines, cut backs and pumping banked terrain; it all made sense. And riding pools was the ultimate challenge (still is!). Oddly enough, by 1977 everyone on the East Coast had a skateboard and there were even a few skate parks, primarily in Florida, and in Long Island (surf areas). But like anywhere, anytime, even today, with all the so-called pro skaters, only a small handful could step up and shine against the best.
There is a difference between good skaters or even really good skaters and great skaters. The difference was obvious and will always be. You had to be great to be pro and you had to put in your time!

In ‘77 there weren’t many pro skaters in New York, maybe only one that I knew of; John Woodstock. John was a Long Island surfer and one of only two East Coast skaters invited to the Nassau Coliseum in ‘76 for the East Coast’s only pro skate contest against all of Cali’s best. John was a really good slalom racer and did well. He was even picked up by the industry’s top slalom team, Gordon & Smith (G&S). That’s who you wanted to ride for if you were serious about racing. John was lucky enough to have been to Cali and back by ‘77, which is the year he took 2nd to Tony Alva at the Long Beach Arena. (Tony’s Guinness Book Jump) and in April ‘77 he had a “Who’s Hot” in SkateBoarder. Every skater from pro to nobody wanted a “Who’s Hot”. By ‘78, John was again one of the two only East Coast pros to be invited a week early with the Best in the World for the Grand Opening of Cherry Hill Skatepark.

John was an influence in skating on the East Coast. He helped design and build the Pipeline in Northport, he was also part owner of NY’s first skateboard company, Woodcarver. Skater, designer, builder and innovator, John influenced a generation of skaters in Long Island and his designs influenced generations to come with the introduction of the concave. John was the first that we know of to dish out the nose of his boards, a joke to most at the time, but today, the standard for all boards. John says the concave was born out of his surfing experience just as his skating was.

It’s a little over 20 years later and after 20 years of retirement (time to build a family) John “Woody” Woodstock is back. Back on target. Once again greatness rises to the top. Living now in Florida with his wife and family, John has persevered long enough to realize more of his dreams. From scratch, he found financing and the site for the new West Palm Beach YMCA Skatepark. He also retrieved from his memory – concrete. Enough to build three pools. All designed and built by John and crew. After a brief trip down to West Palm myself, I have to say they got a good thing going on down there. Good vibes, good skaters and good terrain. Most of all it was great to see John skate again. After more than 20 years, he’s back on where he left off, impacting skating and full of desire.  Good skating with you again.

What was the first board you ever rode?
A skim board, the first board I ever rode was in 1964. We bought it ar Sears, it was called Surf Side 606, it was a pop out. I was 9 years old back then.

How was surfing back then?
It was awesome. I learned to surf at Breezy point, in Long Island. My parents had a beach shack there, where we lived we had a crew of surfers, like a tribe. Surfing back then it was more underground. We were more focused on having a great time and being around the ocean. Whereas now you find it’s all about competition, who is better, who is sponsored. Then again, it’s great to see those young kids latch onto surfing and completely dedicate themselves. They earn the skill.

How do you feel about the East Coast to the West Coast?
In the East, the surfers are more willing to surf anything. Where as in the West they are laid back. In Hawaii, the surf is good on a daily basis, but my dream is to surf J-Bay.