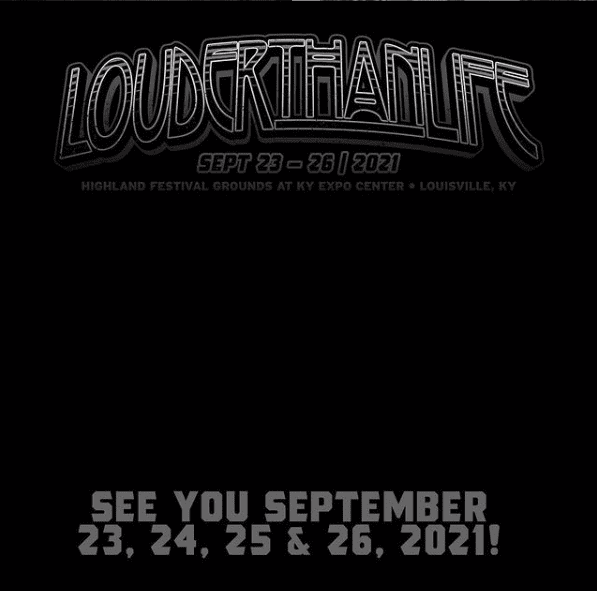 Single day and weekend passes for Louder Than Life are on sale now at www.LouderThanLifeFestival.com.

The current Louder Than Life lineup is as follows (subject to change):

Louder Than Life will feature nearly 70 music acts over 4 days, with performances on three stages, along with award-winning bourbons, whiskey, spirits, craft beer, and the best food Louisville has to offer. Festival attendees will enjoy a variety of onsite food and beverage experiences, as well as sponsor activations that celebrate the bourbon culture and culinary heritage of this unique American city.

Single day and weekend general admission and VIP passes for Louder Than Life are on sale now. Festivalgoers are encouraged to buy early and save, since pass prices will increase in the coming weeks. A limited number of specially priced tickets for military personnel are on sale now via GovX. A limited number of Weekend Camping Packages are available for both car + tent and RVs. Admission to the festival is not included in Weekend Camping Packages and must be purchased separately.

VIP pass perks include (but are not limited to) access to all general admission areas in the festival grounds, as well as a dedicated festival entrance, access to a shaded “hang area” with dedicated bars, live audio/video streams of main stages, access to a front-of-stage VIP viewing area, dedicated merch tent, premium dedicated food and drink (for purchase), air-conditioned restrooms and a commemorative laminate.

Top Shelf VIP is Presented by Angel’s Envy and passes will include all the above plus an air-conditioned tent, front-of-stage viewing for the right main stage, additional viewing deck, all-inclusive premium drinks and complimentary hors d’oeuvres.

Over the coming months, Danny Wimmer Presents will be working with local officials to make sure the festival conforms to then-current social distancing protocols.

The Highland Festival Grounds at KY Expo Center are located at 937 Phillips Lane in Louisville, KY.

About Danny Wimmer Presents: Since 1995, music industry veteran Danny Wimmer has been producing concerts and festivals, both large and small. In 2011, he formed Danny Wimmer Presents, which now produces several of the largest rock and alternative festivals in the U.S. By combining A-list talent with local cuisine and culture, DWP has become recognized within the industry for delivering the highest-quality entertainment experiences to fans, artists, sponsors, partners and host cities. DWP creates memorable and all-encompassing festival experiences, leaving both consumers and partners with lasting and meaningful impressions. DWP will continue to add new music festivals to its already stellar portfolio, which currently includes Aftershock, Bourbon & Beyond, Epicenter, Hometown Rising, Inkcarceration Music & Tattoo Festival, Louder Than Life, Sonic Temple Art + Music Festival, and Welcome To Rockville. Previous DWP festivals include Rock On The Range, Carolina Rebellion, Northern Invasion and more.  In 2020, DWP launched the popular digital series Offstage with DWP and Beyond the Barrel, and ventured into the digital content curation space, promoting pay-per-view live streams.