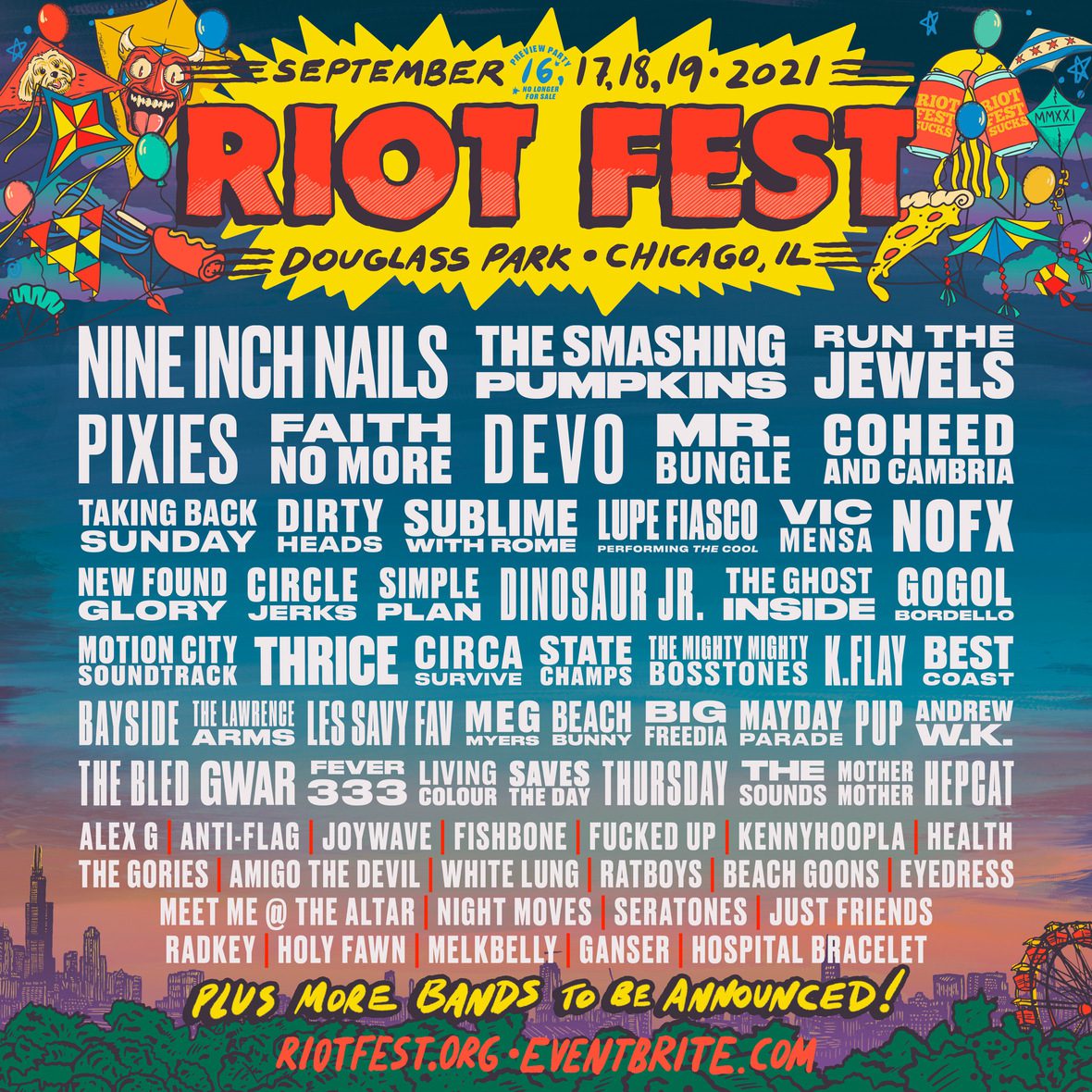 Riot Fest is gearing up for a return to Douglass Park September 17–19, 2021. In an unprecedented move, festival organizers are revealing the lineup for 2021, along with tickets for 2022. Three-day passes for both years are now on sale; 2021 single-day passes will go on sale next week, when more bands for 2021 will be announced.

Rock & Roll Hall of Fame inductees Nine Inch Nails will headline the festival’s 2021 edition, alongside The Smashing Pumpkins and Run the Jewels. New additions for this September’s festival include Faith No More, a recently reunited Mr. Bungle, DEVO, NOFX, Dinosaur Jr., The Ghost Inside, Motion City Soundtrack, along with many others.

2021 attendees are no doubt ready for the return of Nine Inch Nails, whose striking headlining set at Riot Fest 2017 was widely regarded as one of the best performances in the festival’s 17-year history (a 2019 fan vote chose Nine Inch Nails as the #1 Riot Fest set ever).

Since then, Trent Reznor and his groundbreaking industrial rock group have been decorated with multiple awards—most notably, an induction into the Rock & Roll Hall of Fame last year, an Emmy for Reznor and Atticus Ross’ score for HBO’s 2019 Watchmen limited-series, and an Oscar for their score to Pixar’s 2020 film Soul.

Their headlining set at Riot Fest 2021 will be one of the first Nine Inch Nails’ live performance since their 2020 Hall of Fame induction. As for next year, fans can start planning extra early: The long-awaited return of My Chemical Romance will come to Riot Fest 2022, September 16–18, 2022—a hotly-anticipated reunion that Riot Fest fans have long hoped for, finally realized.

As a treat to fans, previous ticket holders can purchase 2022 passes at a special price for a limited time; ticket transfers to next year, refunds, and layaway options are also available (more info is available on Riot Fest’s website).

Safety measures regarding COVID-19—a top priority this year—will be frequently updated, as directed by local health and public safety officials.

Founded in 2005, Riot Fest is an independent music festival featuring the best of punk, rock ‘n’ roll, hip hop, metal, alternative, and just about everything in between. Founder Riot Mike is credited with helping to reunite iconic bands like Naked Raygun, the Replacements, the Misfits, and Jawbreaker, among many other reunions—a staple of Riot Fest, alongside full album performances, carnival rides, and the occasional butter sculpture.