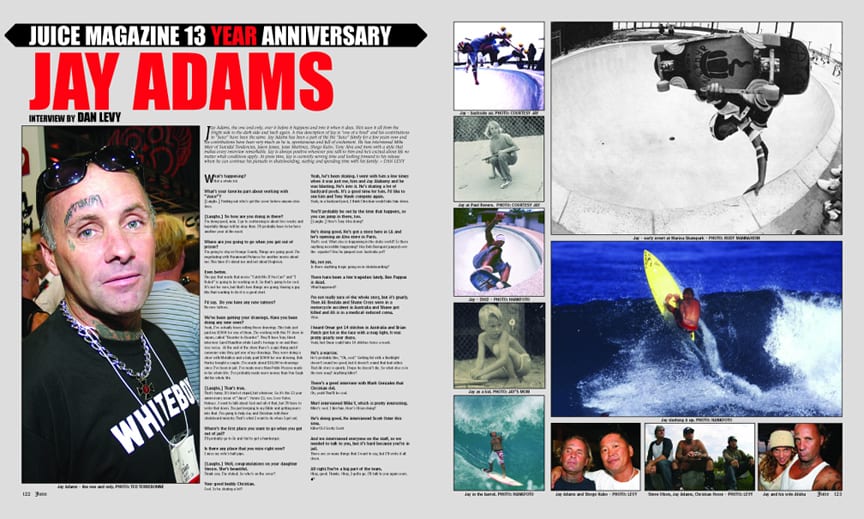 Jay Adams, the one and only, over it before it happens and into it when it does. He’s seen it all from the bright side to the dark side and back again. A true description of Jay is “one of a kind” and his contributions to “Juice” have been the same. Jay Adams has been a part of the the “Juice” family for a few years now and his contributions have been very much as he is, spontaneous and full of excitement. He has interviewed Mike Muir of Suicidal Tendencies, Jason Jessee, Jesse Martinez, Shogo Kubo, Tony Alva and more with a style that makes every interview remarkable. Jay is always positive whenever you talk to him and he’s excited about life no matter what conditions apply. At press time, Jay is currently serving time and looking forward to his release where he can continue his pursuits in skateboarding, surfing and spending time with his family.

“I’m negotiating with Paramount Pictures for a movie about me. This time it’s about me and not about Dogtown.”

What’s happening?
Not a whole lot.

What’s your favorite part about working with “Juice”?
[Laughs.] Finding out who’s got the cover before anyone else does.

[Laughs.] So how are you doing in there?
I’m doing good, man. I go to sentencing in about two weeks and hopefully things will be okay then. I’ll probably have to be here another year at the most.

Where are you going to go when you get out of prison?
I’m going to stay in Orange County. Things are going good. I’m negotiating with Paramount Pictures for another movie about me. This time it’s about me and not about Dogtown.

Even better.
The guy that made that movie “Catch Me If You Can” and “I Robot” is going to be working on it. So that’s going to be cool. It’s not for sure, but that’s how things are going. Having a guy like that wanting to do it is a good start.

We’ve been getting your drawings. Have you been doing any new ones?
Yeah, I’ve actually been selling those drawings. This lady just paid me $2000 for one of them. I’m working with this TV show in Japan, called “Boarder to Boarder”. They’ll have Tony Hawk interview Laird Hamilton while Laird’s footage is on and then vice versa. At the end of the show there’s a quiz thing and if someone wins they get one of my drawings. They were doing a show with Metallica and a lady paid $2000 for one drawing. Bob Hurley bought a couple. I’ve made about $10,000 in drawings since I’ve been in jail. I’ve made more than Pablo Picasso made in his whole life. I’ve probably made more money than Van Gogh did his whole life.

[Laughs.] That’s true.
That’s funny. It’s kind of stupid, but whatever. So it’s the 13 year anniversary issue of “Juice”. Venice 13, ese. Loco Vatos. Holmes. I want to talk about God and all of that, but I’ll have to write that down. I’m just keeping to my Bible and getting more into that. I’m going to help Jay and Christian with their skateboard ministry. That’s what I want to do when I get out.

Where’s the first place you want to go when you get out of jail?
I’ll probably go to In and Out to get a hamburger.

Is there any place that you miss right now?
I miss my wife’s half pipe.

[Laughs.] Well, congratulations on your daughter Venice. She’s beautiful.
Thank you. I’m stoked. So who’s on the cover?

Your good buddy Christian.
Cool. Is he skating a lot?

Yeah, he’s been skating. I went with him a few times when it was just me, him and Jay Alabamy and he was blasting. He’s into it. Hosoi is skating a lot of backyard pools. It’s a good time for him. I’d like to see him and Tony Hawk compete again.
Yeah, in a backyard pool, I think Christian would take him down.

You’ll probably be out by the time that happens, so you can jump in there, too.
[Laughs.] How’s Tony Alva doing?

He’s doing good. He’s got a store here in LA and he’s opening an Alva store in Paris.
That’s cool. What else is happening in the skate world? Is there anything incredible happening? Has Bob Burnquist jumped over the equator? Has he jumped over Australia yet?

No, not yet.
Is there anything tragic going on in skateboarding?

There have been a few tragedies lately. Ben Pappas is dead.
What happened?

I’m not really sure of the whole story, but it’s gnarly. Then Ali Boulala and Shane Cross were in a motorcycle accident in Australia and Shane got killed and Ali is in a medical-induced coma.
Wow.

I heard Omar got 14 stitches in Australia and Brian Patch got hit in the face with a mag light. It was pretty gnarly over there.
Yeah, but Omar could take 14 stitches twice a week.

He’s a warrior.
He’s probably like, “Oh, cool.” Getting hit with a flashlight doesn’t sound too good, but it doesn’t sound that bad either. That Ali story is gnarly. I hope he doesn’t die. So what else is in the new mag? Anything killer?

There’s a good interview with Mark Gonzales that Christian did.
Oh, yeah! That’ll be cool.

Murf interviewed Mike V, which is pretty interesting.
Mike’s cool. I like him. How’s Olson doing?

And we interviewed everyone on the staff, so we needed to talk to you, but it’s hard because you’re in jail.
There are so many things that I want to say, but I’ll write it all down.

All right.You’re a big part of the team.
Okay, good. Thanks. Okay, I gotta go. I’ll talk to you again soon.