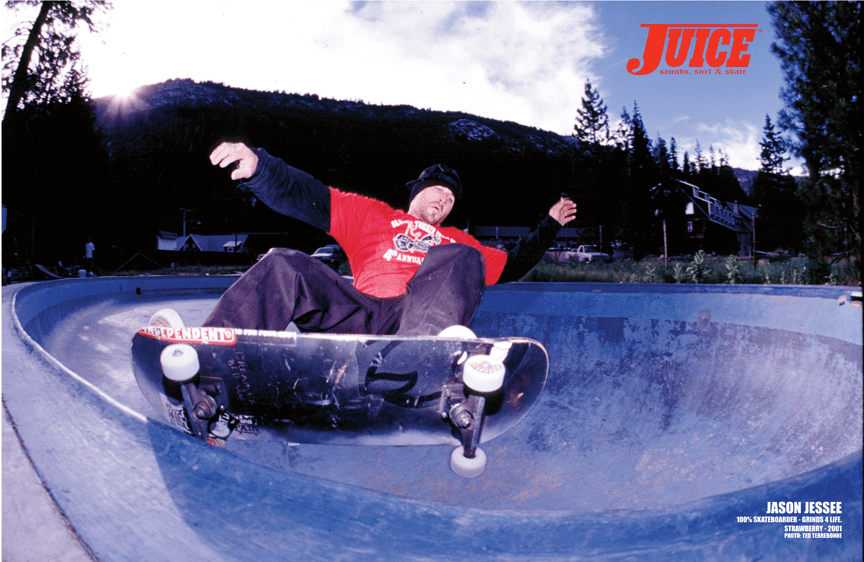 “To me, being a skateboarder means your life; my life. It means being myself or a little bit of everyone I look up to and that’s a lot.”

Hey. For all you people that don’t know about J.J., you will never know how tough and raw he is, so, I’m going to tell you my side of the story and what I think about J.J. and him as a true friend! Take it how you want. J.J. has impacted my life in a big way. He’s one of the few skateboarders who made me the skateboarder that I am today.

I remember being a little youngster looking at magazines and watching what few videos there were back then and seeing J.J. sk8board. His sk8boarding and him as an individual made him stand out in my head. It was a treat, when I saw him in magazines, they were always insane, and watching him in videos was nuts. Ok, stop for one second. Skating is great when you get to skate with your favorite skaters, but when I got to skate and witness J.J. ride, it was different than anyone else. When he sk8ed it was no joke. He sk8ed so gnarly on edge and going big (best airs to fakie in the business). Raw power! Watching him skate made me want to start fighting, socking people in the face, grinding my teeth.

When I was younger I used to try and skate like him, try the same tricks, but it didn’t work, his style is different, original. Classic. There’s only one Jason Jessee. He always had the best graphics. Every model he had was cool. I was so stoked to ride on the same team as him (Santa Cruz). I always rode his board. Everything J.J. is into, he puts 100% into; his skateboarding, motorcycles, lowriders, family and friends.

Whatever Jason is doing, it’s not to be different or standout. He does things ’cause it comes from the heart! The cool shit he has, he’s paid his dues for, he’s earned it. His cars and motorcycles – he has gotten dirty building them from floor up, been many miles to get parts, etc… to make his stuff sick. He always has a gnarly story about how he got his parts or how he had to make it fit.

Everything J.J. owns has some kind of cool history behind it. Other people get into things because it’s the cool thing to do, like overnight tattooed skaters, but that’s not the case with Jason. I know his skateboarding was ahead of its time; making vert skaters look at skating the ramp in a whole new way, attacking the ramp like it was your enemy. I know he cares less if he made a difference in skateboarding or not, or what people think of him. That’s what makes him so radical. From the first time I met Jason, he has never changed as a person. He’s as real as they come, he treats his friends as family, has never burned a bridge with anyone, he goes out of his way to be there for his friends and family. And speaking of family, he’s got the coolest daughter. Just think of how neat it would be to have Jason Jessee as a dad. Go figure. He’s as solid as they come. Definitely 100% sk8boarder. Jesse James of skateboarding.

Where were you born and raised?
Well, I was born in Newport Beach at Hoag Hospital. I was birthed via c-section along with my afterbirth.

Who were your kid friends? Did they skate?
I had some friends as a kid and they weren’t into it that much.

How were you introduced to skateboarding?
My brothers Brent and Jeff – they had skateboards and they ripped.

Did surf have an influence on your skating?
Surf was an influence for sure. Christian Fletcher gave me my first board in fifth grade. And I saw Cheyne Horan at Trestles.

How about style?
Style was everything. You know, pump and turn and gyrate, pump and gyrate. I had to monitor all the squirrels and not look like Dino Andino; more like Archy and stand more like Christian.

Surf or skate first?
Surf because you can always skate at night.

What was he like?
He was nice but he hung out with a different type of skateboarder; Chris Black, Joe Johnson, and the freestyle guy named Greg.

If you could go back in time, would you be Tony Hawk or Duane Peters?
I would be Tony, so I could set aside a lot of money and place it strategically in places that D.P. would find it. Honestly I would be neither because I need D.P.’s music and style and I need Tony Hawk as a teacher on which way not to take skateboarding.