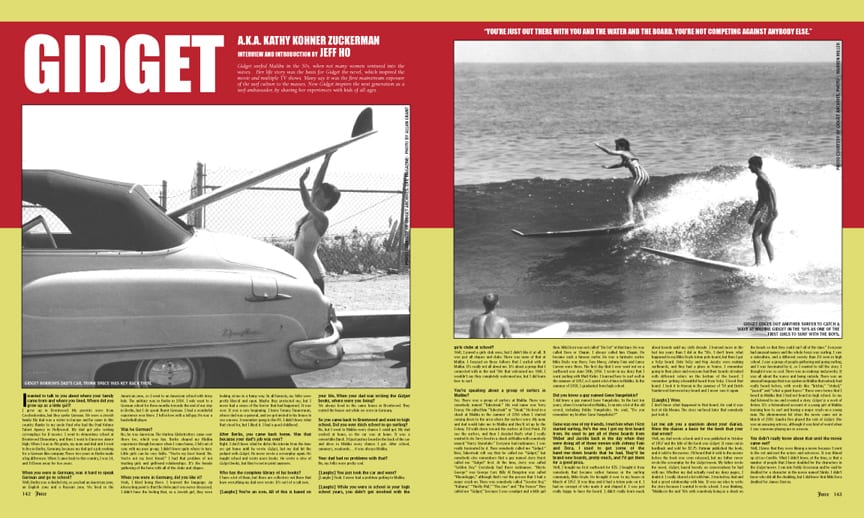 Gidget surfed Malibu in the 50s, when not many women ventured into the waves.  Her life story was the basis for Gidget the novel, which inspired the movie and multiple TV shows. Many say it was the first mainstream exposure of the surf culture to the masses. Now Gidget inspires the next generation as a surf ambassador, by sharing her experiences with kids of all ages.

“You’re just out there with you and the water and the board. You’re not competing against anybody else.”

I wanted to talk to you about where your family came from and where you lived. Where did you grow up as a little girl?
I grew up in Brentwood. My parents were from Czechoslovakia, but they spoke German. We were a Jewish family. My dad was a writer in Europe and he came to this country thanks to my uncle Paul who had the Paul Kohner Talent Agency in Hollywood. My dad got jobs writing screenplays for B movies. I went to elementary school at Brentwood Elementary, and then I went to Emerson Junior High. When I was in 7th grade, my mom and dad and I went to live in Berlin, Germany, because my dad got a job working for a German film company. Those two years in Berlin made a big difference. When I came back to this country, I was 14, and I’d been away for two years.

When you were in Germany, was it hard to speak German and go to school?
Well, Berlin was a divided city, so you had an American zone, an English zone and a Russian zone. We lived in the American zone, so I went to an American school with Army kids. The military was in Berlin in 1954. I only went to a German school for three months towards the end of our stay in Berlin, but I do speak fluent German. I had a wonderful experience over there. I fell in love with a tall guy. He was a basketball player.

Was he German?
No, he was American. The Harlem Globetrotters came over there too, which was fun. Berlin shaped my Malibu experience though because when I came home, I felt out of sync with my peer group. I didn’t know quite where to turn. Little girls can be very fickle. “You’re my best friend. No. You’re not my best friend.” I had that problem of not trusting girls and girlfriend relationships. It’s the female gathering of the hens with all of the clubs and cliques.

When you were in Germany, did you like it?
Yeah, I liked being there. I learned the language. An interesting point is that the Holocaust was never discussed. I didn’t have the feeling that, as a Jewish girl, they were looking at me in a funny way. In all honesty, my folks were pretty liberal and open. Maybe they protected me, but I never had a sense of the horror that had happened. It was over. It was a new beginning. I knew Tommy Timmerman, whose dad was a general, and we got invited to his house to see a movie. I remember going to the PX. I didn’t know what that stood for, but I liked it. I had a good childhood.

After Berlin, you came back home. Was that because your dad’s job was over?
Right. I don’t know what he did in the interim from the time we got home until he wrote Gidget, but my dad hit the jackpot with Gidget. He never wrote a screenplay again. He taught school and wrote more books. He wrote a slew of Gidget books, but they’re not in print anymore.

Who has the complete library of his books?
I have a lot of them, but there are collectors out there that have everything my dad ever wrote. It’s sort of a cult now.

[Laughs] You’re an icon. All of this is based on your life. When your dad was writing the Gidget books, where were you living?
We always lived in the same house in Brentwood. They rented the house out while we were in Germany.

So you came back to Brentwood and went to high school. Did you ever ditch school to go surfing?
No, but I went to Malibu every chance I could get. My dad worked at home, so the car was at home. It was a convertible Buick. I’d just put my board in the back of the car and drive to Malibu every chance I got. After school, summers, weekends… it was always Malibu.