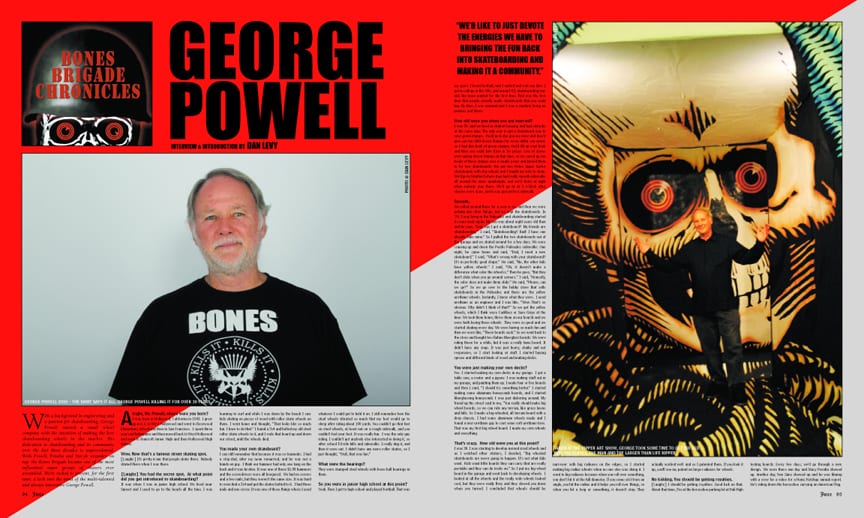 With a background in engineering and a passion for skateboarding, George Powell started a small wheel company with the intention of making the best skateboarding wheels in the market. His dedication to skateboarding and its community over the last three decades is unprecedented. With Powell, Peralta and Stecyk wizardry on tap, the Bones Brigade became

one of the most influential super groups of skaters ever assembled. We’re stoked to present, for the first time, a look into the mind of the multi-talented and always innovative George Powell.

“We’d like to just devote the energies we have to bringing the fun back into skateboarding and making it a community.”

Wow. Now that’s a famous street skating spot.
[Laughs] It’s pretty ironic that people skate there. Nobody skated there when I was there.

[Laughs] You had the secret spot. At what point did you get introduced to skateboarding?
It was when I was in junior high school. We lived near Sunset and I used to go to the beach all the time. I was learning to surf and while I was down by the beach I saw kids skating on pieces of wood with roller skate wheels on them. I went home and thought, “That looks like so much fun. I have to do that.” I found a 2×4 and bolted my old steel roller skate wheels to it, and I rode that board up and down our street, until the wheels died.

You made your own skateboard?
I can still remember that because it was so traumatic. I had a step-dad, after my mom remarried, and he was not a hands-on guy. I think our hammer had only one tang on the back and it was broken. It was one of those $1.98 hammers and the screwdrivers were all boogered. We had no screws and a few nails, but they weren’t the same size. It was hard to even find a 2×4 and get the skates bolted to it. I had three nails and one screw. It was one of those things where I used whatever I could get to hold it on. I still remember how the steel wheels vibrated so much that my feet would go to sleep after riding about 100 yards. You couldn’t go that fast on steel wheels, at least not on a rough sidewalk, and you couldn’t feel your feet. It was really fun. I was the only guy riding. I couldn’t get anybody else interested in doing it, so after school I’d ride hills and sidewalks. I really dug it, and then it wore out. I didn’t have any more roller skates, so I just thought, “Well, that was fun.”

What were the bearings?
They were stamped steel wheels with loose ball bearings in them.

So you were in junior high school at this point?
Yeah. Then I got to high school and played football. That was my sport. I loved football, and I surfed and rode my bike. I got to college in the ‘60s, and around ‘63, skateboarding was into the mass market for the first time. That was the first time that people actually made skateboards that you could buy. By then, I was married and I was a student, living on pennies and dimes.

How old were you when you got married?
I was 20, and we lived in student housing and had odd jobs at the same time. The only way to get a skateboard was to save green stamps. You’d go to the grocery store and they’d give you ten S&H Green Stamps for every dollar you spent, so I had this book of green stamps. You’d fill up your book and then you could turn them in for prizes. Lots of stores were giving Green Stamps at that time, so we saved up ten books of these stamps over a couple years and turned them in for two skateboards. We got two Hobie Super Surfer skateboards with clay wheels and I taught my wife to skate. We’d go to Stanford where they had really smooth sidewalks all around the inner quadrangle, and we’d skate at night when nobody was there. We’d go in at 5 o’clock after classes were done, and it was just perfect sidewalk.

Smooth.
We rolled around there for a year or so, and then we were getting into other things, but we kept the skateboards. In ‘74, I was living in the Palisades and skateboarding started to come back again. My son was about eight years old then and he says, “Dad, can I get a skateboard? My friends are skateboarding.” I said, “Skateboarding? Rad! I have one already. Take mine.” So I pulled the two skateboards out of the garage and we skated around for a few days. We were cruising up and down the Pacific Palisades sidewalks. One night, he came home and said, “Dad, I need a new skateboard.” I said, “What’s wrong with your skateboard? It’s in perfectly good shape.” He said, “No, the other kids have yellow wheels.” I said, “Oh, it doesn’t make a difference what color the wheel is.” Then he goes, “But they don’t slide when you go around corners.” I said, “Honestly, the color does not make them slide.” He said, “Please, can we go?” So we go over to the hobby store that sells skateboards in the Palisades and there are the yellow urethane wheels. Instantly, I knew what they were. I used urethane as an engineer and I was like, “Wow. That’s so obvious. Why didn’t I think of that?” So we got the yellow wheels, which I think were Cadillacs or Sure Grips at the time. We took them home, threw them on our boards and we were both loving those wheels. They were so good and we started skating every day. We were having so much fun and then we were like, “These boards suck.” So we went back to the store and bought two Bahne fiberglass boards. We were riding those for a while, but it was a really lame board. It didn’t have any snap. It was just heavy, clunky and not responsive, so I start looking at stuff. I started buying spruce and different kinds of wood and making decks.