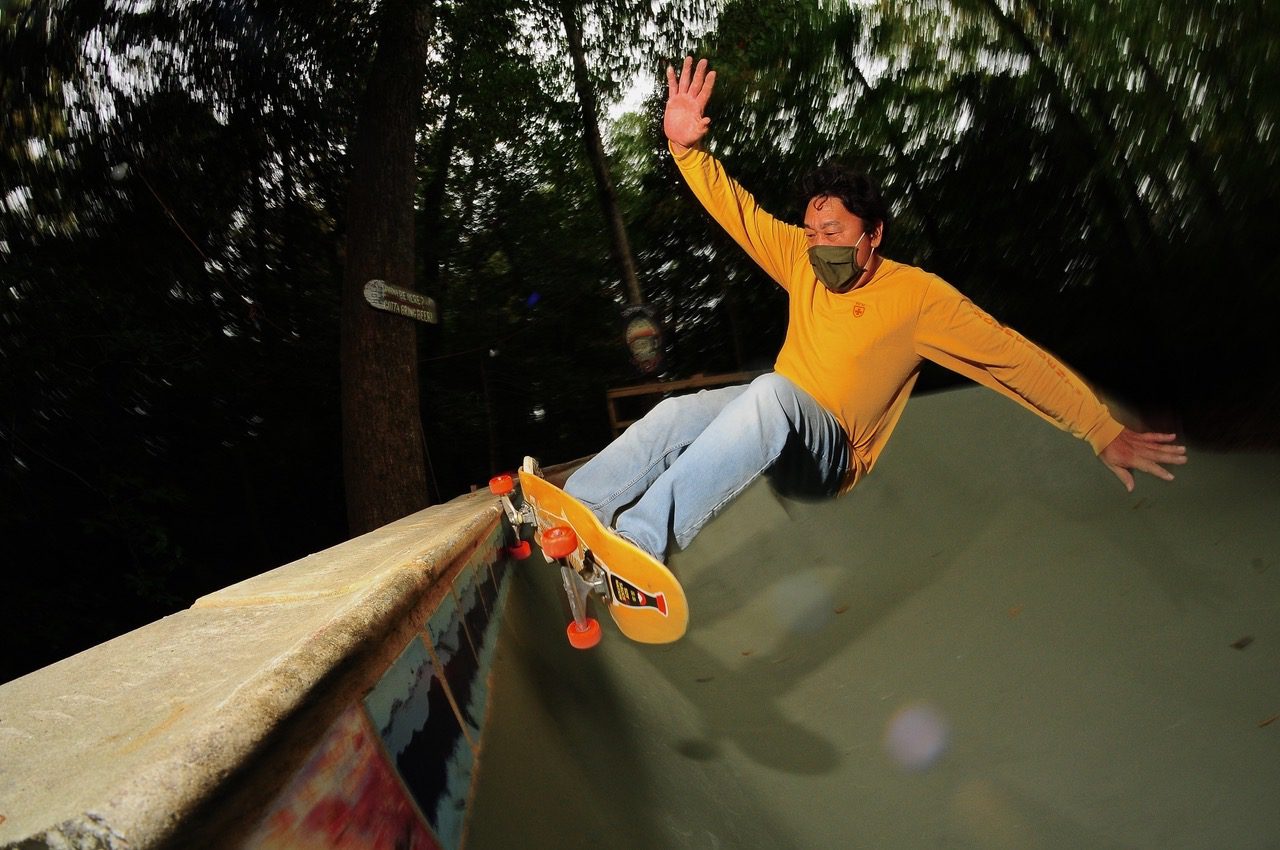 The Story of the Federal Stone Pool Coping Family

Federal Stone started pouring pool coping in 1965, and its focus was exactly that: pools. Throughout time, as skateboarders began invading pools to skate, Federal Stone became many skateboarders’ preferred pool block due to its quality and the roaring noise you’d get rolling over the “DQ” diamond embossed coping. As skateboarding lifer, Sam Boo, says, “When you see diamonds on the back of the coping, you know it’s Federal Stone and you know it’s going to grind.”

Nowadays, hardcore devotees of Federal Stone can be found building skate spots in a vast variety of places. On the East Coast, Jaime Stapula and the ECRW, a crew of skaters and builders dedicated to creating the biggest, meanest round wall skate bowls, use Federal Stone DQ pool coping blocks at the top of every one of the ECRW concrete waves.

As the founder of East Coast Ramp Design, Chris Mearkle, says, “Federal Stone has been doing their thing for a long time. Jaime [Stapula] turned me onto them and I first used it at the Chicken Bowl in Canada.”

“It’s good to see skateboarding once again putting to good use a product that was not originally intended for skateboarding. Federal Stone is a family run business and the service is good and the turnaround time is great and the price is fair. They have different styles of block and they make it easy to order. DQ diamond top all the way,” says Merk.

Without a doubt, Federal Stone has been an intrinsic part of skateboarding history. Now, in another history-making move, Federal Stone is setting yet another quality standard in skateboarding by sponsoring East Coast born and bred skateboarder, Ben Hatchell. You can also expect more announcements coming soon.

As the folks at Federal Stone said, “We’re thankful to be part of such a great community of skaters who love our blocks. We want to keep working hard at our craft so that we can continue to serve many more park, bowl and pipe builds as skating continually grows.”

In order to share the legacy of Federal Stone and highlight its connection to the skate community, Anthony Smallwood, (skateboarder-filmmaker-photographer-curator-skateboarding activist and co-founder of Washington D.C.’s underground skate spot, Fight Club) produced a short film about this East Coast-based business. Read on for his thoughts on the making of this mini-documentary and check out the film to explore more about the story of the Federal Stone family.

A Conversation with Anthony Smallwood, producer of the Federal Stone film project.

JUICE: What inspired you to want to make a film about Federal Stone coping?

ANTHONY: For me, it all goes back to the influence of Jaime Stapula and the ECRW. He’s been singing the song and slinging Federal Stone as long as I’ve known him. One day, at Union Market, it came together when I overheard skater/builder, Dave Mutarelli, telling someone he “uses Federal Stone on all of his projects”. From there, I pitched a loose concept to two skater/filmmaker buddies, Brian Canavan and Joe Hancher, and they jumped right on board. We wrote it as a documentary, drew up a budget and I made a cold call to Fed Stone. Luckily, they didn’t hang up on me.

JUICE: Federal Stone is now sponsoring Ben Hatchell. Is sponsorship of a pro skateboarder a first for a pool coping company, and how did that come about and can we expect any future film projects featuring Hatchell riding spots with Federal Stone coping?

ANTHONY: Ben was an ECRW baby, raised by Jaime, Micro, etc. and it just made sense – a local skater sponsored by a local company. Unfortunately, Ben was in a car accident shortly before our filming commenced and that’s why he’s not included. No doubt we’ll be seeing him in various forms of media ripping the diamonds. We laughed and wondered if anyone had previously been sponsored by a swimming pool company.

JUICE: Tell us about the skate spots that you’ve included in the film and why you chose to highlight them?

ANTHONY: Well, we’re lucky to have so much to skate here in the DMV. The locations were all so unique and we wanted to express the prevalence of terrain featuring Fed Stone coping, so we first shot at the Dog Bowl, which was our longest running backyard pool. We lost it soon after filming. Thanks to the McKenna family for all the great years of hospitality.

The next stop was Green Skate Lab—a project of the ECRW—which is a design treasure on par with anything found in the great museums of the National Mall. After that we hit Tom Roszkowski’s ramp. Tom gave a great interview and his ramp has that awesome “vintage” pattern with five rows of tiny diamonds from Fed Stone’s earliest years. Next we shot at Dave Mutarelli’s house. We incorporated some ripping clips of his indoor bowl known as ’The Shop’ but mostly framed that segment around a driveway quarter-pipe that Dave built utilizing Fed Stone ‘AQ’, which doesn’t have diamonds and made sense on a narrow transition where there’s no real room to roll around. The next location was obviously our most important and the project doesn’t work without it. “The Pond’ . . ‘Casa ECRW’ . . ‘Jaime’s Place’ . . if you’ve ever visited, you know there’s been a strict ’No Photo/No Video’ rule for many years, but Jaime Stapula graciously allowed us access to film the bowl.

We wanted to shoot an interview on the premises with a brief description of what the Pond is all about and Sam Boo was standing there and he’s a total natural on camera. I heard about Sam long before I ever met him. Jaime would talk about many talented skaters and the names Sam Boo and Dan Heyman seemed to pop up the most. All these years later, I’ve been lucky enough to skate pools with Sam and Dan – two great gents. Our final location brought us back to our opening location, where skater/builder Ray Conklin removed old coping from the Dog Bowl and salvaged it for his backyard paradise pour known as ’The Slab’. Ray and his ‘CCB’ crew have been chipping away at this secret wooded wonderland for the last ten years, and it was nice to see the coping being recycled back into the ecosystem.

JUICE: Tell us about some of the other skateboarders that you’ve included and how they came to be in the film?

ANTHONY: We mostly just recruited the folks that we skate with on the regular circuit – local rippers and true believers. We brought in Ben and Collin for the big fireworks, but lost Ben due to the car accident injuries. Everyone else filled in splendidly. There’s a nice mix of older legends and young pups. It was fun to shoot.

JUICE: After working on this project with the Rethemeyer family at Federal Stone, what were your impressions of the company and the people who work there?

ANTHONY: It was a real honor to work with and get to know such a cool and supportive group of people. They had no intention of making a film or having a team or sponsoring events or selling soft goods. They just always showed an appreciation for the culture, selling chipped block at deep discounts and sending t-shirts and swag with skatepark coping orders. They are hard working and extremely generous and are great examples of what we expect from our business and community leaders. Every idea has come from our crew and they’ve trusted us. They were shocked to hear there are skate teams. We laughed and said, “Even Jeep and Levi’s have teams”, and they said, “Let’s do it.” To me, a coping company having a skate team makes all the sense in the world.

JUICE: How did you choose your filmmaking team and what about their background made them right for this project?

ANTHONY: My partners are both DC-based independent filmmakers and guys I ride and hang with on the regular. Brian has worked with NatGeo and Smithsonian and Joe recently made a film for Thrasher (RIP Joe Hammake). They’re both incredibly talented and professional and it was easy to get them interested because they like Federal Stone.

JUICE: Explain who Gus and ECRW are and why you dedicated the film to them?

ANTHONY: Gus was the Rethemeyer patriarch and Federal Stone company owner. According to family lore, Gus took a strong liking to Jaime and the ECRW and that’s why I give Jaime credit for popularizing it. He made an impression and created a bond with the family. David Rethemeyer said Gus would always say, “Make sure you take care of my boys”. Gus passed away a few years back at age 92. He worked right into his nineties. ECRW stands for East Coast Round Wall and that is Jaime and Devin and Kelly O and Ben’s A & H and Craig O, etc. Those folks took halfpipes and turned them on their sides. They like to go round and round and grind. Their influence is huge and we in the DMV are lucky to have them.

JUICE: Why is Federal Stone your favorite choice for pool coping?

ANTHONY: Skaters will grind and attack anything, so maybe there’s no actual ‘bad’ coping, but Fed Stone has that good grind. The fact they’ve been around since 1965, makes them one of the oldest brands in skateboarding, and they deserve our support.

JUICE: Is there anyone that you’d like to give a shoutout to that helped make this film happen or has inspired you over the years through skateboarding or filmmaking?

ANTHONY: My father was always supportive of my art and skateboarding and he recently passed away. Our last lucid moment together was watching the film and it was obvious he was proud. For that, I’m forever grateful to everyone involved. Cheers!

PrevPreviousSkateboarder Mike Gigliotti Reinterprets Nickelodeon’s SpongeBob SquarePants for Vans
NextDescendents “Like The Way I Know,” from ‘9th & Walnut’ Album Out July 23Next