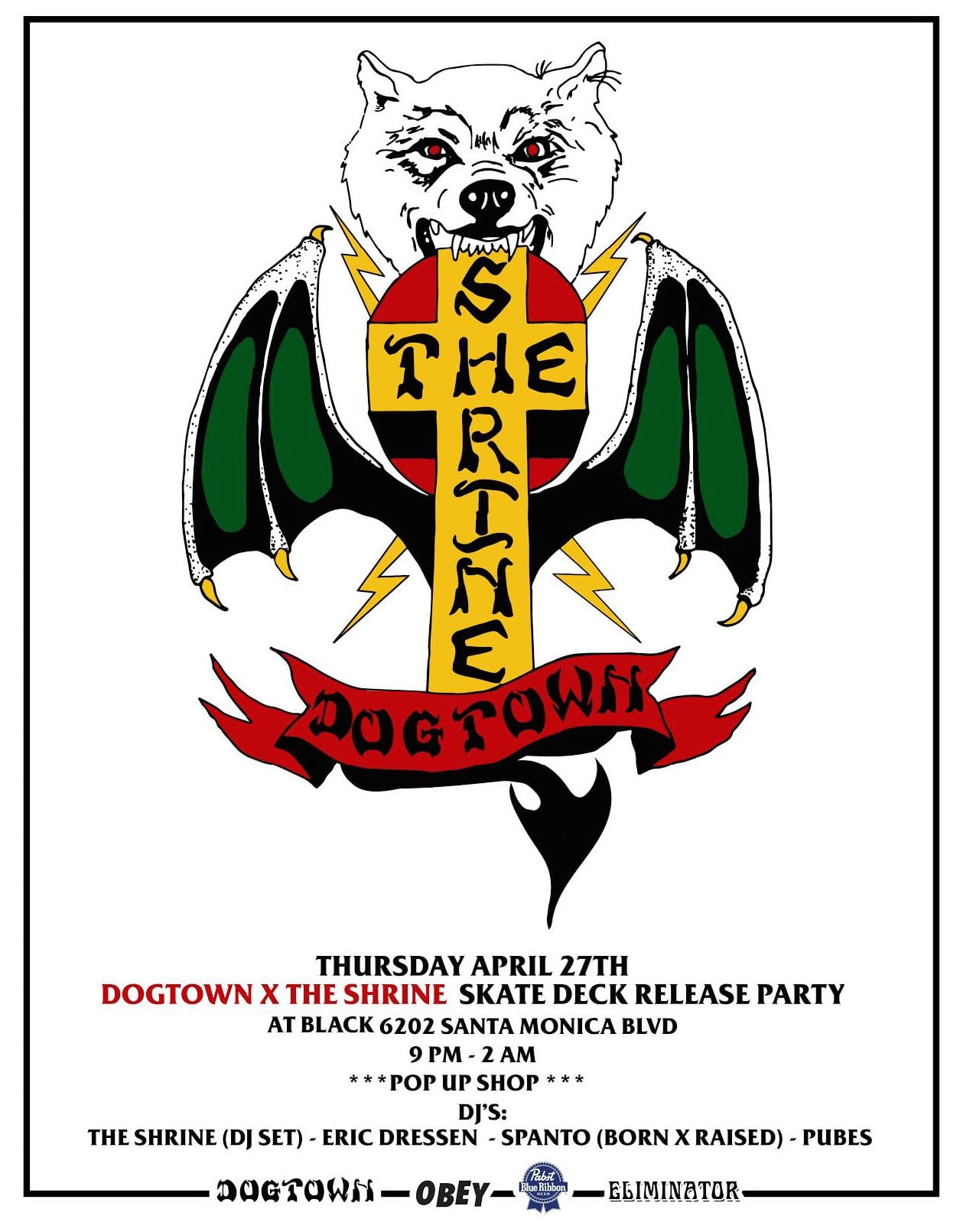 Tonight is the night! The Shrine X Dogtown Skateboards Collaboration Release Party is the place to be this evening at Black Bar, 6202 Santa Monica Blvd, Hollywood, CA. (9pm-2am)

Two of Venice, California’s most widely-recognized names, Dogtown Skateboards and The Shrine, have come together to release a special, limited-edition skateboard in celebration of the symbiotic relationship between music, timeless style and the transformative art of skateboarding.

Dogtown Skateboards was birthed in 1976 out of the notorious Zephyr surf and skate scene that dominated southern California in the ‘70s (as documented in the films “Dogtown & Z-Boys” and “Lords of Dogtown”) and has since cemented itself as an integral part of American culture as we know it. Started by Z-boy, Jim Muir, Dogtown Skateboards has consistently held close ties with the world of music and culture. Jim is the older brother of Mike Muir, frontman for the Venice-based punk band, Suicidal Tendencies, and the two have gone hand-in-hand since day one. Dogtown’s relationship with the L.A. music scene created a legacy that continues to inspire current and future generations all over the world.

The Shrine is a Venice-based, down and dirty, rock ‘n’ roll band that was kick-started by charismatic frontman and lifelong shredder, Josh Landau. At 27 years old, Josh is a Santa Monica High School alumni as well as a Venice Beach local. Described by Rolling Stone Magazine as “equal parts Black Flag and Thin Lizzy”, The Shrine continues the true-to-Venice tradition of eating, breathing, and sleeping skateboarding and rock ‘n’ roll. After spending half of 2016 on the road touring Japan, Australia, Europe, and South America, The Shrine has spent first quarter of 2017 at home in Los Angeles working on the new song “I Can’t Control It”.

Drawing parallels between the relationship of Jim and Mike Muir, Josh Landau is the older brother of noted skateboarder, Jason Landau, who spends his days on the grind for clothing label, Supreme, and upholding his reputation as one of the young and dangerous up-and-comers in the LA pool skating scene. Both Josh and Jason were featured in Tino Razo’s new book “Party In The Back”, which documents California landscapes and current backyard pool skateboarding.

Shepard Fairey, who has championed the band and hosted performances at his art gallery, has teamed up for this project with a limited collection of t-shirts bearing the classic Dogtown x The Shrine graphic under his Obey Clothing label.

The Shrine X Dogtown skate deck collaboration is a culmination of this deep-rooted union between Venice, skateboarding, and music, decades in the making.