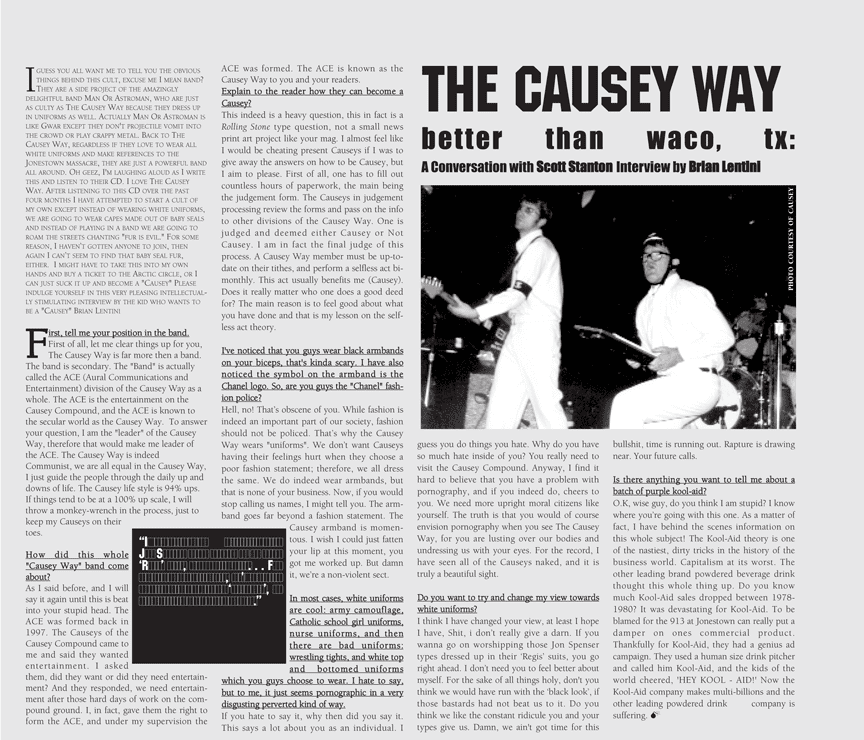 I guess you all want me to tell you the obvious things behind this cult, excuse me, I mean, band? They are a side project of the amazingly delightful band Man Or Astroman, who are just as culty as The Causey Way because they dress up in uniforms as well. Actually Man Or Astroman is like Gwar except they don’t projectile vomit into the crowd or play crappy metal. Back to The Causey Way, regardless if they love to wear all white uniforms and make references to the Jonestown massacre, they are just a powerful band all around. Oh geez, I’m laughing aloud as I write this and listen to their CD. I love The Causey Way. After listening to this CD over the past four months I have attempted to start a cult of my own except instead of wearing white uniforms, we are going to wear capes made out of baby seals and instead of playing in a band we are going to roam the streets chanting “fur is evil.” For some reason, I haven’t gotten anyone to join, then again I can’t seem to find that baby seal fur, either. I might have to take this into my own hands and buy a ticket to the Arctic circle, or I can just suck it up and become a “Causey” Please indulge yourself in this very pleasing intellectually stimulating interview by the kid who wants to be a “Causey”

First, tell me your position in the band.
First of all, let me clear things up for you, The Causey Way is far more then a band. The band is secondary. The “Band” is actually called the ACE (Aural Communications and Entertainment) division of the Causey Way as a whole. The ACE is the entertainment on the Causey Compound, and the ACE is known to the secular world as the Causey Way. To answer your question, I am the “leader” of the Causey Way, therefore that would make me leader of the ACE. The Causey Way is indeed Communist, we are all equal in the Causey Way, I just guide the people through the daily up and downs of life. The Causey life style is 94% ups. If things tend to be at a 100% up scale, I will throw a monkey-wrench in the process, just to keep my Causeys on their toes.

How did this whole Causey Way band come about?
As I said before, and I will say it again until this is beat into your stupid head. The ACE was formed back in 1997. The Causeys of the Causey Compound came to me and said they wanted entertainment. I asked them, did they want or did they need entertainment? And they responded, we need entertainment after those hard days of work on the compound ground. I, in fact, gave them the right to form the ACE, and under my supervision the ACE was formed. The ACE is known as the Causey Way to you and your readers.

“While fashion is indeed an important part of our society, fashion should not be policed. That’s why the Causey Way wears “uniforms”. We don’t want Causeys having their feelings hurt when they choose a poor fashion statement; therefore, we all dress the same.”

Explain to the reader how they can become a Causey?
This indeed is a heavy question, this in fact is a Rolling Stone type question, not a small news print art project like your mag. I almost feel like I would be cheating present Causeys if I was to give away the answers on how to be Causey, but I aim to please. First of all, one has to fill out countless hours of paperwork, the main being the judgement form. The Causeys in judgement processing review the forms and pass on the info to other divisions of the Causey Way. One is judged and deemed either Causey or Not Causey. I am in fact the final judge of this process. A Causey Way member must be up-to-date on their tithes, and perform a selfless act bi-monthly. This act usually benefits me (Causey). Does it really matter who one does a good deed for? The main reason is to feel good about what you have done and that is my lesson on the selfless act theory.

I’ve noticed that you guys wear black armbands on your biceps, that’s kinda scary. I have also noticed the symbol on the armband is the Chanel logo. So, are you guys the “Chanel” fashion police?
Hell, no! That’s obscene of you. While fashion is indeed an important part of our society, fashion should not be policed. That’s why the Causey Way wears “uniforms”. We don’t want Causeys having their feelings hurt when they choose a poor fashion statement; therefore, we all dress the same. We do indeed wear armbands, but that is none of your business. Now, if you would stop calling us names, I might tell you. The armband goes far beyond a fashion statement. The Causey armband is momentous. I wish I could just fatten your lip at this moment, you got me worked up. But damn it, we’re a non-violent sect. In most cases, white uniforms are cool: army camouflage, Catholic school girl uniforms, nurse uniforms, and then there are bad uniforms: wrestling tights, and white top and bottomed uniforms which you guys choose to wear. I hate to say, but to me, it just seems pornographic in a very disgusting perverted kind of way.

FOR THE REST OF THE STORY, ORDER ISSUE #49 BY CLICKING HERE…