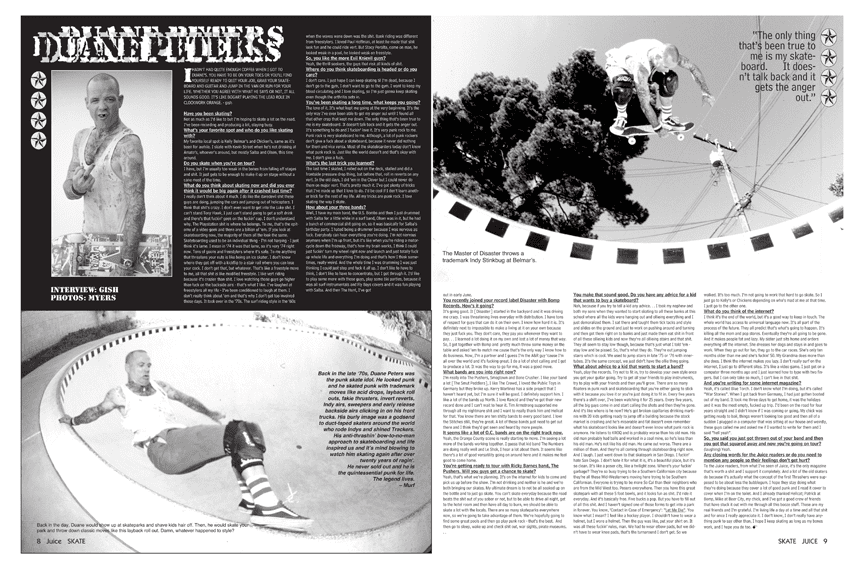 INTERVIEW AND INTRODUCTION BY GISH
PHOTOS BY PAT MYERS

I hadn’t had enough coffee when I got to Duane’s. You have to be on your toes or you’ll find yourself ready to quit your job, grab your skateboard and guitar and jump in the van or run for your life. Whether you agree with what he says or not, it all sounds good. It’s like Bogart playing the lead role in Clockwork Orange.

Have you been skating?
Not as much as I’d like to but I’m hoping to skate a lot on the road. I’ve been recording and producing a lot, staying busy.

What’s your favorite spot and who do you like skating with?
My favorite local spot is Kelly Bellmar’s and Chicken’s, same as it’s been for awhile. I skate with Kevin Street when he’s not drinking at Amato’s, whoever is around, but mostly Salba and Olson.

What do you think about skating now and did you ever think it would be big again after it crashed last time?
I really don’t think about it much. I do like the daredevil shit these guys are doing, jumping the cars and jumping out of helicopters. I think that shit’s crazy. I don’t even want to get into the loop shit. I can’t stand Tony Hawk, I just can’t stand going to get a soft drink and there’s that fuckin’ geek on the fuckin’ cup. I don’t understand why. The Playstation shit is where he belongs. To me, that’s the epitome of a video geek and there are a billion of ’em. If you look at skateboarding now, the majority of them all the look the same. Skateboarding used to be an individual thing – I’m not harping – I just think it’s lame. I mean in ’74 it was that lame, so it’s very ’74 right now. Tons of goons and freestylers where it’s safe. To me anything that threatens your nuts is like being an ice skater. I don’t know where they get off with a kickflip to a stair rail where you can lose your cock. I don’t get that, but whatever. That’s like a freestyle move to me, all that shit is like modified freestyle. I like vert riding because it’s crazier than shit. I love watching those guys go higher than fuck on the backside airs – that’s what I like. I’ve laughed at freestylers all my life – I’ve been conditioned to laugh at them. I don’t really think about ’em and that’s why I don’t get too involved these days. It took over in the ’70s. The surf riding style in the ’60s when the waves were down was the shit. Bank riding was different from freestylers. I loved Paul Hoffman, at least he made that shit look fun and he could ride vert. But Stacy Peralta, come on man, he looked weak in a pool, he looked weak on freestyle.

“THE ONLY THING THAT’S BEEN TRUE TO ME IS MY SKATEBOARD. IT DOESN’T TALK BACK AND IT GETS THE ANGER OUT.”

So, you like the more Evil Knievil guys?
Yeah, the thrill seekers, the guys that risk all kinds of shit.

Where do you think skateboarding is headed or do you care?
I don’t care. I just hope I can keep skating til I’m dead, because I don’t go to the gym, I don’t want to go to the gym. I want to keep my blood circulating and I love skating, so I’m just gonna keep skating.

You’ve been skating a long time, what keeps you going?
The love of it. It’s what kept me going at the very beginning. It’s the only way I’ve ever been able to get my anger out until I found all that other crap that kept me down. The only thing that’s been true to me is my skateboard. It doesn’t talk back and it gets the anger out. It’s something to do and I fuckin’ love it. It’s very punk rock to me. Punk rock is very skateboard to me. Although, a lot of punk rockers don’t give a fuck about a skateboard, because it never did nothing for them and vice versa. Most of the skateboarders today don’t know what punk rock is. Just like the world doesn’t and that’s okay with me. I don’t give a fuck.

What about advice to a kid that wants to start a band?
Yeah, play the records. Try not to fit in, try to develop your own style once you get your guitar going. Try to get all your friends to play instruments, try to play with your friends and then you’ll grow. There are so many floaters in punk rock and skateboarding that you’re either going to stick with it because you love it or you’re just doing it to fit in. Every five years there’s a shift over, I’ve been watching it for 25 years. Every five years, all the big guys come in and start calling the shots and then they’re gone. And it’s like where is he now? He’s got broken capillaries drinking martinis with 20 kids getting ready to jump off a building because the stock market is crashing and he’s miserable and fat doesn’t even remember what his skateboard looks like and doesn’t even know what punk rock is anymore. He listens to KROQ and is probably worse than his old man. His old man probably had balls and worked in a coal mine, so he’s less than his old man. He’s not like his old man. He came out worse. There are a million of them. And they’re all coming through skateboarding right now. I just went down to that skatepark in San Diego. I fuckin’ hate San Diego. I don’t hate it for what it is, it’s a beautiful place, but it’s so clean. It’s like a poser city, like a twilight zone. Where’s your fuckin’ garbage? They’re so busy trying to be a Southern Californian city because they’re all these Mid-Westerners moving here trying to be Southern Californian. Everyone is trying to be more So Cal than their neighbors who are from the Midwest too. Posers everywhere. Then you have this great skatepark with all these 5 foot bowls, and it looks fun as shit. I’d ride it everyday. And it’s basically free. Five bucks a pop. But you have to fill out of all this shit. And I haven’t signed one of those forms to get into a park in forever. You know, ‘Contact in Case of Emergency’: “Let Me Die”. You know what I mean? I feel like a hockey player. I shouldn’t have to wear a helmet, but I wore a helmet. Then the guy was like, put your shirt on. It was all these fuckin’ rules, man. We had to wear elbow pads, but we didn’t have to wear knee pads, that’s the turnaround I don’t get. So we walked. It’s too much. I’m not going to work that hard to go skate. So I just go to Kelly’s or Chickens depending on who’s mad at me at that time. I just go to the other one.

Any words for the Juice readers?
To the Juice readers, from what I’ve seen of Juice, it’s the only magazine that’s worth a shit and I support it completely. And a lot of the old skaters do because it’s actually what the concept of the first Thrashers were supposed to be about less the bubblegum. I hope they stay doing what they’re doing because they cover a lot of good punk and I read it cover to cover when I’m on the toilet.

FOR THE REST OF THE STORY, ORDER ISSUE #49 BY CLICKING HERE…