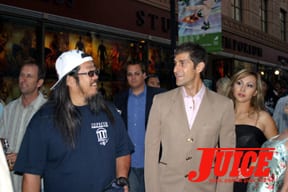 Sony Pictures Studios played host to the Surfrider Foundation’s 20th Anniversary Gala celebration. An amazing collection of one of a kind surfboards shaped by the surf industry’s most respected board builders were auctioned to raise money for the Surfrider Foundation. It was standing room only as Shaun Tomson and Steve Pezman introduced Sotheby’s auction house to execute the effort which raised $425,000. Highlights included the Matt Kivlin Balsa gun being awarded to the highest bidder at a humble $40,000. All the while, Jack Johnson and Perry Farrell took the stage outside to provide a classic musical performance after they were honored with Keeper of the Coast Awards.

By all accounts it was a night to remember, as the Surfrider Foundation celebrated its 20th Anniversary by hosting a VIP gala and surfboard auction at the Sony Pictures Studios in Culver City, California this past June 17th. All told, the event attracted nearly one thousand guests and raised over $425,000 for the Foundation. At the event, Jack Johnson and Perry Farrell were awarded Surfrider Foundation’s Keepers of the Coast award. ‘The event exceeded our expectations, both as a fundraiser and as a celebration of this important milestone in our organization’s history,’ said Christopher Evans, Executive Director for the Surfrider Foundation. Read Surfrider Foundation’s pre-event press release at http://beach.com/surfrider/press_releases_index.asp and see event photos and descriptions of auctioned surfboards at http://www.surfrider.org/20th.