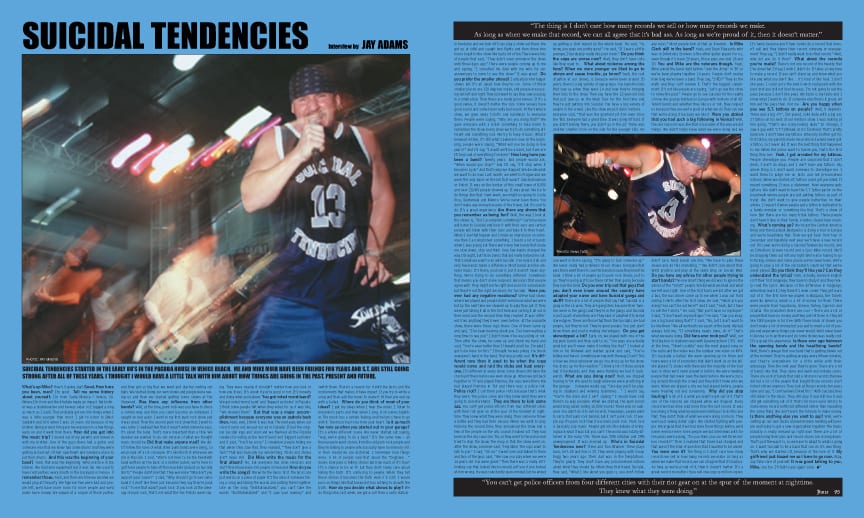 Suicidal Tendencies started in the early 80’s in the Pagoda house in Venice Beach. Me and Mike Muir have been friends for years and S.T. are still going strong after all of these years. I thought I would have a little talk with him about how things are going in the past, present and future.

Tell me some history about yourself.
I’m from Santa Monica / Venice, CA. Where I’m from and the lifestyle made an impact. My brother was a skateboarder and he was older so I tagged a long as much as I could. That probably got me into things when I was a little younger than most. I got to listen to Black Sabbath and UFO when I was 10 years old because of my brother. Being around him gave me exposure to a few things early on and it went from there.

How did you get into the music trip?
I moved out of my parents and moved in with my brother. One of the guys there had a guitar and someone else that we knew had some drums and they were getting kicked out of their apartment and needed a place to put their drums.

And this was the beginning of your band?
Yeah, that was the beginning. We’d practice in the kitchen. We had lame equipment but it was fun. We used to have rent parties every month in the backyard in Venice.

“We figured if we were bad and people left, we’d have more room for more people and we’d make more money. We played at a couple of those parties and they got so big that we went and started renting out halls. We started doing our own shows and people were seeing us and then we started getting some shows at the Starwood.”

I remember those.
Yeah, and then one time we decided we would play at the party. We figured if we were bad and people left, we’d have more room for more people and we’d make more money. We played at a couple of those parties and they got so big that we went and started renting out halls. We started doing our own shows and people were seeing us and then we started getting some shows at the Starwood.

Was there any influence from other bands?
Well, at the time, punk rock was you have to dress a certain way and then you could become an individual. I caught on real quick. I went to my first punk rock show and it was great. Then the second punk rock show that I went to was lame. I realized then that it wasn’t what someone says, it’s about the band. That’s more important than a title. We decided we wanted to do our version of what we thought music should be.

Did that make anyone mad?
We didn’t follow the rules of what other punk bands were doing, so we pissed off a lot of people. It’s like the first interview we did in Flipside. I said, ‘We’re not here to be the twentieth band written on the back of a leather jacket, we’re here to get those people to take off those jackets and put on Suicidal shirts.’ People didn’t like that. They were like ‘Why don’t you support your scene?’ I said, ‘Why should I go to see some band if I don’t like them just because they say they’re punk rock.’ To me that wasn’t punk rock. If you look at the ideology of punk rock, that’s not what the Sex Pistols were saying. They were saying it shouldn’t matter how you look or how you dress. It’s about if you’re good or not. It’s honesty and doing what you believe.

You got voted worst band?
We got voted ‘worst band’ and ‘biggest assholes’ in Flipside. I think some people felt when they voted for us it was like, ‘We showed them.’

But that was a major accomplishment because everyone was an asshole back then.
Yeah, well, I think it was fear. The next year, when our record came out, we put our ad in Flipside. It had the original Suicidal logo and skull and we thanked all the Flipside readers for voting us the ‘worst band’ and ‘biggest assholes’ and it said, ‘You’ll be sorry.’ I remember people telling me that when they saw that, they realized, ‘They don’t give a fuck.’ That was basically our whole thing. Sticks and stones don’t mean shit.