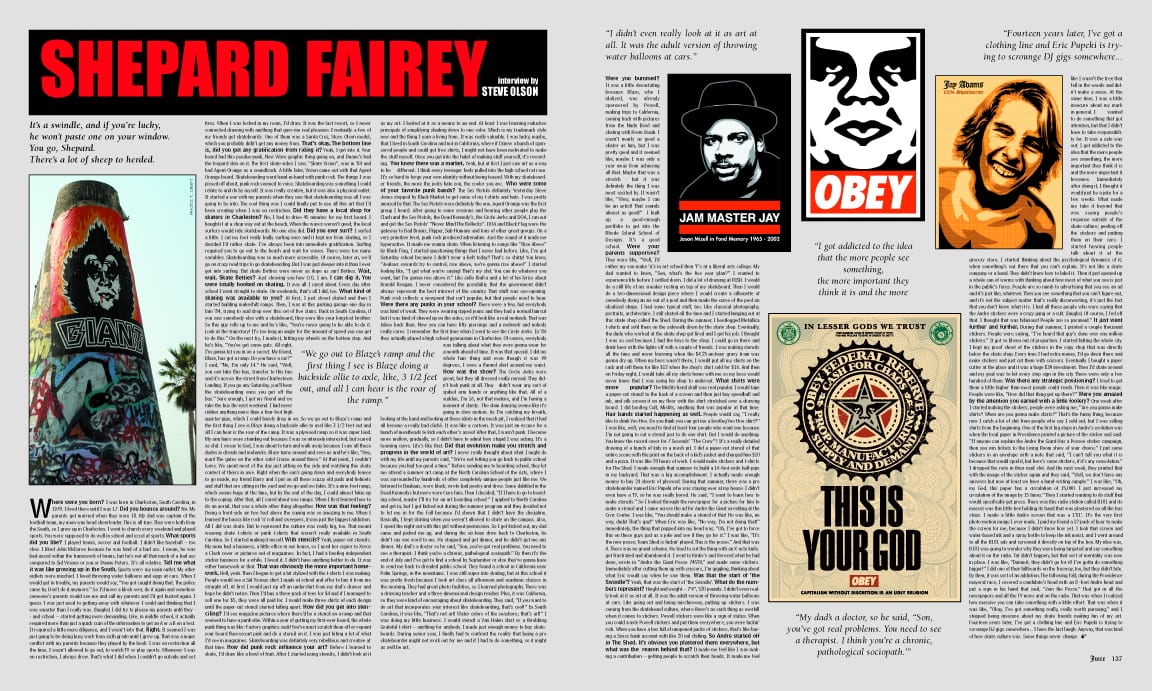 It’s a swindle, and if you’re lucky, he won’t paste one on your window. You go, Shepard. There’s a lot of sheep to be herded.

Where were you born?
I was born in Charleston, South Carolina, in 1970. I lived there until I was 17.

Did you bounce around?
No. My parents got married when they were 18. My dad was captain of the football team, my mom was head cheerleader. This is all true. They were both from the South, so I grew up in Charleston. I went to church every weekend and played sports. You were supposed to do well in school and excel at sports.

What sports did you like?
I played tennis, soccer and football. I didn’t like baseball — too slow. I liked John McEnroe because he was kind of a bad ass. I mean, he was bad-assed within the framework of tennis, but he’s not all that much of a bad ass compared to Sid Vicious or you or Duane Peters. It’s all relative.

Tell me what it was like growing up in the South.
Sports were my main outlet. My other outlets were mischief. I loved throwing water balloons and eggs at cars. When I would get in trouble, my parents would say, ‘You got caught doing that. The police came by. Don’t do it anymore.’ So I’d move a block over, do it again and somehow someone’s parents would see me and call my parents and I’d get busted again. I guess I was just used to getting away with whatever I could and thinking that I was smarter than I really was. (laughs) I did try to please my parents until they — and school — started getting more demanding. Like, in middle school, it actually required more than just a quick scan of the information to get an A or a B on a test. It required a little more diligence, and I wasn’t into that.

Right.
It seemed I was just going to be doing busy work from sixth grade until I grew up. That was a major conflict with my parents because they played by the book: I was on restriction all the time. I wasn’t allowed to go out, to watch TV or play sports. Whenever I was on restriction, I always drew. That’s what I did when I couldn’t go outside and set fires. When I was locked in my room, I’d draw. It was the last resort, so I never connected drawing with anything that gave me real pleasure. Eventually. a few of my friends got skateboards. One of them was a Santa Cruz, Steve Olson model, which you probably didn’t get any money from.

That’s okay. The bottom line is, did you get any gratification from riding it?
Yeah, I got into it. Your board had this pseduo-punk, New Wave graphic thing going on, and Duane’s had the leopard skin on it. The first skate video I saw, ‘Skate Vision’, was in ’84 and had Agent Orange as a soundtrack. A little later, Vision came out with that Agent Orange board. Skateboarding went hand-in-hand with punk rock. The things I was pissed off about, punk rock seemed to voice. Skateboarding was something I could relate to and do by myself. It was really creative, but it was also a physical outlet. It started a war with my parents when they saw that skateboarding was all I was going to be into. The cool thing was I could finally put to use all this art that I’d been creating when I was on restriction.

Did they have a local shop for skaters in Charleston?
No, I had to drive 45 minutes for my first board. I bought it at a shop way out at the beach, When the waves weren’t good, the local surfers would ride skateboards. No one else did.

Did you ever surf?
I surfed a little. I cut my foot really badly surfing once and it kept me from skating, so I decided I’d rather skate. I’ve always been into immediate gratification. Surfing required you to go out to the beach and wait for waves. There were too many variables. Skateboarding was so much more accessible. Of course, later on, we’d go on crazy road trips to go skateboarding. But I was just deeper into it than I ever got into surfing. But skate Betties were never as dope as surf Betties.

Wait, wait. Skate Betties?
Just showing you how O.G. I am.

I can dig it. You were totally hooked on skating.
It was all I cared about. Every day after school I went straight to skate. On weekends, that’s all I did, too.

“So we go out to Blaize’s ramp and the first thing I see is Blaize doing a backside ollie to axle like 3 1/2 feet out and all I can hear is the roar of the ramp. It was a plywood ramp so it was super loud. My arm hairs were standing out because I was so intensely interested, but scared as shit.”

What kind of skating was available to you?
At first, I just street skated and then I started building makeshift ramps. Then, I was at this parking garage one day in late ’84, trying to acid drop over this set of five stairs. Back in South Carolina, if you saw somebody else with a skateboard, they were like your long-lost brother. So this guy rolls up to me and he’s like, ‘You’re never going to be able to do it. Look at the trajectory! It’s too long an angle for the amount of speed you can get to do this.’ On the next try, I made it, hitting my wheels on the bottom step. And he’s like, ‘You’ve got some guts. All right, I’m gonna let you in on a secret. My friend, Blaize, has got a ramp. Do you have a car?’ I said, ‘No, I’m only 14.’ He said, ‘Well, you can take this bus, transfer to this bus and it’s across the street from Charleston Landing. If you go any Saturday, you’ll hear the skateboarding once you get off the bus.’ Sure enough, I get my friend and we take the bus the next weekend. I had never ridden anything more than a four-foot high quarter-pipe, which I could barely drop in on. So we go out to Blaize’s ramp and the first thing I see is Blaize doing a backside ollie to axle like 3 1/2 feet out and all I can hear is the roar of the ramp. It was a plywood ramp so it was super loud. My arm hairs were standing out because I was so intensely interested, but scared as shit. I swear to God, I was about to turn and walk away because I saw all these dudes in dreads and mohawks. Blaize turns around and sees us and he’s like, ‘Hey, man! The gates on the other side! Cruise around there.’ At that point, I couldn’t leave. We spent most of the day just sitting on the side and watching this skate contest of theirs in awe. Right when the sun’s going down and everybody leaves to go inside, my friend Barry and I put on all these scuzzy old pads and helmets and stuff that are sitting in the yard and we go and we fakie. It’s a nine-foot ramp, which seems huge at the time, but by the end of the day, I could almost fakie up to the coping. After that, all I cared about was ramps. When I first learned how to do an aerial, that was a whole other thing altogether.

How was that feeling?
Doing a front-side air two feet above the coping was so amazing to me. When I learned the basics like rock ‘n’ roll and sweepers, it was just the biggest addiction. All I did was skate, but to represent the culture was really big, too. That meant wearing skate t-shirts or punk t-shirts that weren’t really available in South Carolina. So I started making it myself.

With stencils?
Yeah, paper-cut stencils. My mom had a business, a little office in our house, so I used her copier to Xerox a Clash cover or pictures out of magazines. In fact, I had a bootleg independent sticker business for a while. I loved it. I didn’t have anything better to do. It was either homework or that.

That was obviously the more important homework.
Hell, yeah. Then I began to get a bit stylized with the t-shirts I was making. People would see a Sid Vicious shirt I made at school and offer to buy it from me straight off. At first I would just rip off an undershirt from my dad’s drawer and hope he didn’t notice. Then I’d buy a three-pack of tees for $4 and if I managed to sell one for $5, they were all paid for. I would make three shirts of each design until the paper-cut stencil started falling apart.

How did you get into stenciling?
I’d see magazine pictures where there’d be a stencil on a ramp and that seemed to have a punk vibe. Within a year of getting my first-ever board, the whole punk thing was like: Factory graphics suck! You’ve must scratch them off or repaint your board fluorescent pink and do a stencil on it. I was just biting a lot of what I’d see in magazines. Skateboarding was definitely very rebellious and creative at that time.