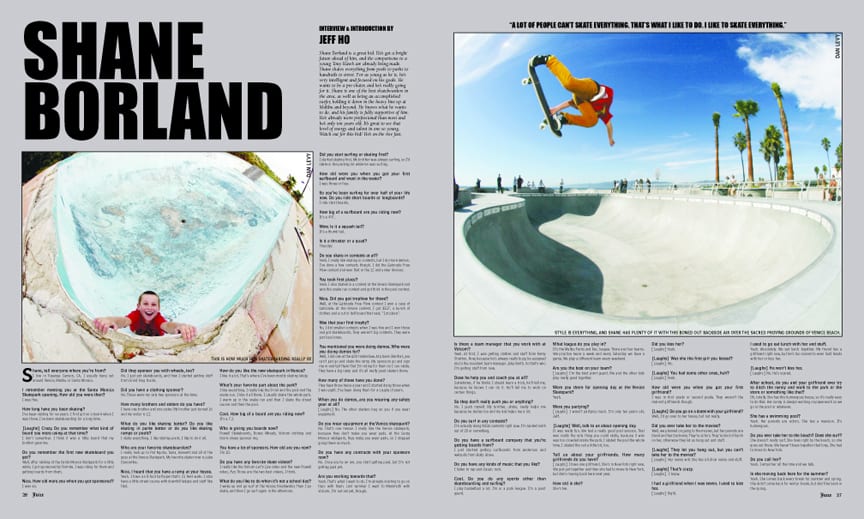 Shane Borland is a great kid. He’s got a bright future ahead of him, and the comparisons to a young Tony Hawk are already being made. Shane skates everything from pools to parks to handrails to street. For as young as he is, he’s very intelligent and focused on his goals. He wants to be a pro skater, and he’s really going for it. Shane is one of the best skateboarders in the area, as well as being an accomplished surfer, holding it down in the heavy line up at Malibu and beyond. He knows what he wants to do, and his family is fully supportive of him. He’s already more professional than most and he’s only ten years old. It’s great to see that level of energy and talent in one so young. Watch out for this kid! He’s on the rise fast.

Shane, tell everyone where you’re from?
I live in Topanga Canyon, CA. I usually hang out around Venice, Malibu or Santa Monica.

I remember meeting you at the Santa Monica Skatepark opening. How old you were then?
I was five.

[Laughs] Crazy. Do you remember what kind of board you were using at that time?
I don’t remember. I think it was a little board that my brother gave me.

Do you remember the first new skateboard you got?
Well, after skating at the Santa Monica Skatepark for a little while, I got sponsored by Termite. I was riding for them and getting boards from them.

Nice. How old were you when you got sponsored?
I was six.

Did they sponsor you with wheels, too?
No. I just got skateboards, and then I started getting stuff from Grind King trucks.

Did you have a clothing sponsor?
No. Those were my only two sponsors at the time.

How many brothers and sisters do you have?
I have one brother and one sister. My brother just turned 16 and my sister is 12.

Who are your favorite skateboarders?
I really look up to Pat Ngoho, Tuma, Bennett and all of the guys at the Venice Skatepark. My favorite skater now is Jake Duncombe.

Nice. I heard that you have a ramp at your house.
Yeah. I have an 8-foot half-pipe that’s 21 feet wide. I also have a little street course with downhill ledges and stuff like that.

How do you like the new skatepark in Venice?
I like it a lot. That’s where I’ve been mostly skating lately.

What’s your favorite part about the park?
I like everything. I really like the 8-rail and the pool and the snake run. I like it all there. I usually skate the whole park. I warm up in the snake run and then I skate the street course and then the pool.

Do you have any favorite skate videos?
I really like the Volcom Let’s Live video and the new Powell video, Fun. Those are the two best videos, I think.

What do you like to do when it’s not a school day?
I wake up and go surf at the Venice Breakwater. Then I go skate, and then I go surf again in the afternoon.

Did you start surfing or skating first?
I started skating first. My brother was always surfing, so I’d skate in the parking lot while he was surfing.

How old were you when you got your first surfboard and went in the water?
I was three or four.

Wow. Is it a squash tail?
It’s a thumb tail.

Is it a thruster or a quad?
Thruster.

Do you skate in contests at all?
Yeah. I really like skating in contests, but I do more demos. I’ve done a few contests though. I did the Gatorade Free Flow contest and won that in the 12 and under division.

You took first place?
Yeah. I also skated in a contest at the Venice Skatepark and won the snake run contest and got third in the pool contest.

Nice. Did you get trophies for those?
Well, at the Gatorade Free Flow contest I won a case of Gatorade. At the Venice contest, I got $127, a bunch of clothes and a cut in half board that said, “1st place”.

Was that your first trophy?
No. I did smaller contests when I was five and I won those and got skateboards. They weren’t big contests. They were just local ones.

You mentioned you were doing demos. Who were you doing demos for?
Well, I did one at the ASR tradeshow. At places like that, you can’t just go and skate the ramp. My sponsors go and sign me in and tell them that I’m riding for them so I can skate. They have a big ramp and it’s all really good skaters there.

How many of those have you done?
They have those twice a year and I started doing those when I was eight. I’ve been doing them for a couple of years.

When you do demos, are you wearing any safety gear at all?
[Laughs] No. The other skaters bag on you if you wear equipment.

Do you have any contracts with your sponsors now?
No. Once you’re an am, you start getting paid, but I’m not getting paid yet.

Are you working towards that?
Yeah. That’s what I want to do. I’m already starting to go on trips with them. Last summer I went to Mammoth with Volcom. I’m not am yet, though.

Is there a team manager that you work with at Volcom?
Yeah. At first, I was getting clothes and stuff from Remy Stratton. Now, because he’s always really busy, he assigned me to the assistant team manager Jake Smith. So that’s who I’m getting stuff from now.

Does he help you and coach you at all?
Sometimes, if he thinks I should learn a trick, he’ll tell me, because he knows I can do it. He’ll tell me to work on certain things.

So they don’t really push you or anything?
No. I push myself. My brother, Jimbo, really helps me because he skates too and my dad helps me a lot.