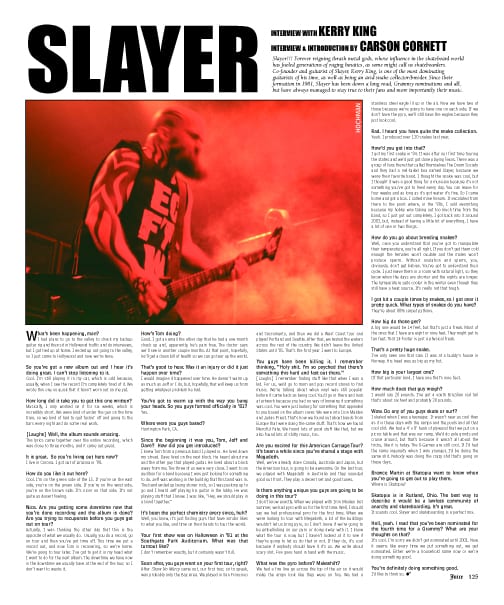 Slayer!!! Forever reigning thrash metal gods, whose influence in the skateboard world has fueled generations of raging lunatics, as some might call us skateboarders. Co-founder and guitarist of Slayer, Kerry King, is one of the most dominating guitarists of his time, as well as being an avid snake collector/breeder. Since their formation in 1981, Slayer has been down a long road, Grammy nominations and all, but have always managed to stay true to their fans and more importantly their music.

“Musically, I only worked on it for six weeks, which is incredibly short. We were kind of under the gun on the time train, so we kind of had to quit fuckin’ off and going to the bars every night and do some real work.”

What’s been happening, man?
I had plans to go to the valley to check my backup guitar rig and then sit in Hollywood traffic and do interviews, but I got tied up at home. I ended up not going to the valley, so I just came to Hollywood and now we’re here.

So you’ve got a new album out and I hear it’s doing great. I can’t stop listening to it.
Cool. I’m still playing it in my car, which is odd because, usually, when I see the record I’m completely tired of it. We wrote this one so quick that it hasn’t worn out on me yet.

How long did it take you to get this one written?
Musically, I only worked on it for six weeks, which is incredibly short. We were kind of under the gun on the time train, so we kind of had to quit fuckin’ off and going to the bars every night and do some real work.

[Laughs] Well, the album sounds amazing.
The lyrics came together over the entire recording, which was close to three months, and it came out great.

It is great. So you’re living out here now?
I live in Corona. I got out of Arizona in ‘98.

Nice. Are you getting some downtime now that you’re done recording and the album is done? Are you trying to recuperate before you guys get out on tour?
Actually, I was thinking the other day that this is the opposite of what we usually do. Usually, you do a record, go on tour and then you’ve got time off. This time we put a record out, and now Tom is recovering, so we’re home. We’re going to tour later. I’ve got to get it in my head what I want to do for the next album. The downtime we have now is the downtime we usually have at the end of the tour, so I don’t want to waste it.

How’s Tom doing?
Good. I got an email the other day that he had a one-month check up and, apparently, he’s pain free. The doctor says we’ll see in another couple months. At that point, hopefully, he’ll get a clean bill of health so we can go tear up the world.

That’s good to hear. Was it an injury or did it just happen over time?
I would imagine it happened over time. He doesn’t warm up as much as Jeff or I do, but, hopefully, that will keep us from getting whatever problem he had.

You’ve got to warm up with the way you bang your heads. So you guys formed officially in ‘81?
Yes.

Where were you guys based?
Huntington Park, CA.

Since the beginning it was you, Tom, Jeff and Dave? How did you get introduced?
I knew Tom from a previous band I played in. He lived down my street. Dave lived on the next block. He heard about me and the other guy that played guitar. He lived about a block away from me. The three of us were very close. I went to an audition for a band because I was just looking for something to do. Jeff was working in the building that this band was in. The band ended up being stoner rock, so I was packing up to go and I heard Jeff playing his guitar in the lobby. He was playing stuff that I knew. I was like, “Hey, we should play in a band together.”