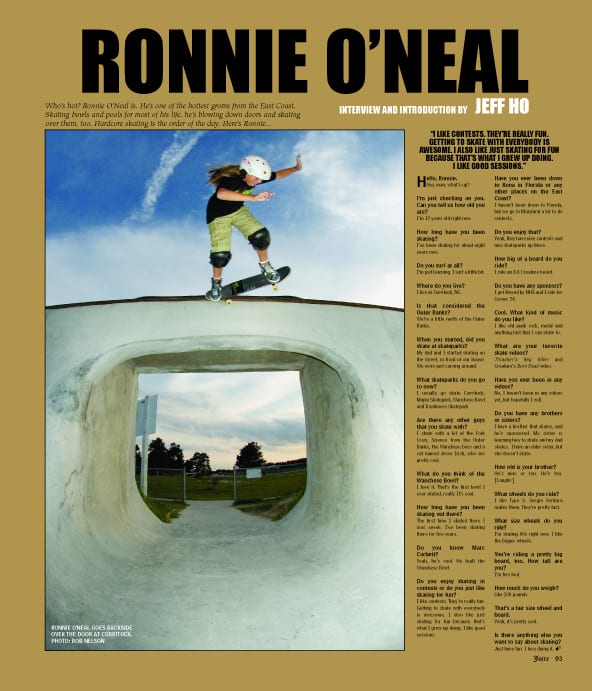 Who’s hot? Ronnie O’Neal is. He’s one of the hottest groms from the East Coast. Skating bowls and pools for most of his life, he’s blowing down doors and skating over them, too. Hardcore skating is the order of the day. Here’s Ronnie…

I’m just checking on you. Can you tell us how old you are?
I’m 12 years old right now.

“I LIKE CONTESTS. THEY’RE REALLY FUN. GETTING TO SKATE WITH EVERYBODY IS AWESOME. I ALSO LIKE JUST SKATING FOR FUN BECAUSE THAT’S WHAT I GREW UP DOING. I LIKE GOOD SESSIONS.”

Do you surf at all?
I’m just learning. I surf a little bit.

Where do you live?
I live in Currituck, NC.

When you started, did you skate at skateparks?
My dad and I started skating on the street, in front of our house. We were just carving around.

What skateparks do you go to now?
I usually go skate Currituck, Maple Skatepark, Wanchese Bowl and Trashmore Skatepark.

Are there any other guys that you skate with?
I skate with a lot of the Fork Crew, Science from the Outer Banks, the Wanchese boys and a cat named Jesse Irish, who are pretty cool.

What do you think of the Wanchese Bowl?
I love it. That’s the first bowl I ever skated, really. It’s cool.

How long have you been skating out there?
The first time I skated there I was seven. I’ve been skating there for five years.

Do you know Marc Corbett?
Yeah, he’s cool. He built the Wanchese Bowl.

Do you enjoy skating in contests or do you just like skating for fun?
I like contests. They’re really fun. Getting to skate with everybody is awesome. I also like just skating for fun because that’s what I grew up doing. I like good sessions.