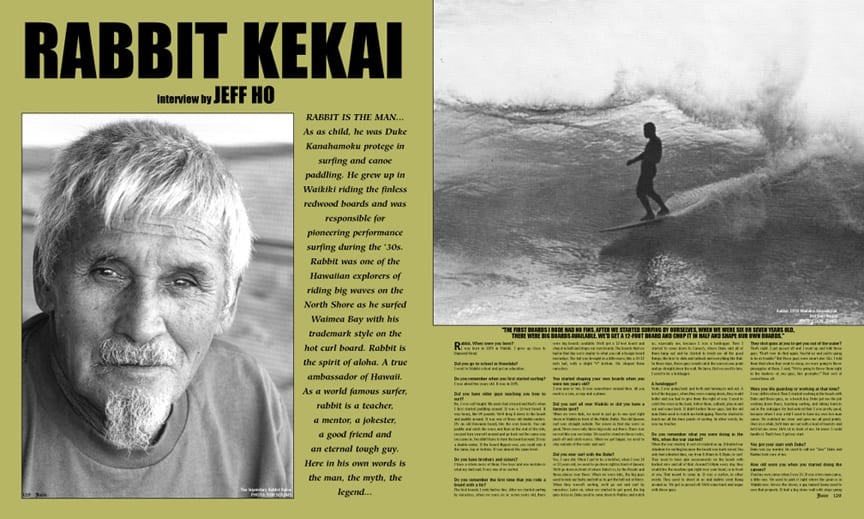 RABBIT IS THE MAN… As as child, he was Duke Kanahamoku protege in surfing and canoe paddling. He grew up in Waikiki riding the finless redwood boards and was responsible for pioneering performance surfing during the ’30s. Rabbit was one of the Hawaiian explorers of riding big waves on the North Shore as he surfed Waimea Bay with his trademark style on the hot curl board. Rabbit is the spirit of aloha. A true ambassador of Hawaii. As a world famous surfer, rabbit is a teacher, a mentor, a jokester, a good friend and an eternal tough guy. Here in his own words is the man, the myth, the legend…

Rabbit. When were you born?
I was born in 1920 in Waikiki. I grew up close to Diamond Head.

Did you go to school in Honolulu?
I went to Waikiki school and got an education.

“THE FIRST BOARDS I RODE HAD NO FINS. AFTER WE STARTED SURFING BY OURSELVES, WHEN WE WERE SIX OF SEVEN YEARS OLD, THERE WERE BIG BOARDS AVAILABLE. WE’D GET A 12-FOOT BOARD AND CHOP IT IN HALF AND SHAPE OUR OWN BOARDS.”

Do you remember when you first started surfing?
I was about five years old. It was in 1925.

Did you have older guys teaching you how to surf?
No, I was self-taught. My uncle had a board and that’s when I first started paddling around. It was a 16-foot board. It was heavy, like 90 pounds. We’d drag it down to the beach and paddle around. It was one of those old double-enders. It’s an old Hawaiian board, like the core boards. You can paddle and catch the wave and then at the end of the ride, you just turn yourself around and go back out the same way you came in. You didn’t have to turn the board around. It was a double-ender. If the board flipped over, you could ride it the same, top or bottom. It was almost the same level.

Do you have brothers and sisters?
I have a whole mess of them. Five boys and one mistake is what my dad said. Every one of us surfed.

Do you remember the first time that you rode a board with a fin?
The first boards I rode had no fins. After we started surfing by ourselves, when we were six or seven years old, there were big boards available. We’d get a 12-foot board and chop it in half and shape our own boards. The boards that we had in that day were similar to what you call a boogie board nowadays. The tail was brought in a little more, like a 10-12 inch tail, with a slight ‘V’ bottom. We shaped them ourselves.

You started shaping your own boards when you were ten years old?
I was nine or ten. It was somewhere around then. All you need is a saw, a rasp and a planer.

Did you surf all over Waikiki or did you have a favorite spot?
When we were kids, we used to just go to one spot right down in Waikiki in front of the Public Baths. The old Queens surf was straight outside. The waves in that day were so good. There were only three big rocks out there. There was no reef like you see today. We used to stand on those rocks, push off and catch waves. When we got bigger, we used to stay outside of the rocks and surf.

Did you ever surf with the Duke?
Yes, I sure did. When I got to be a hotshot, when I was 10 or 12 years old, we used to go down right in front of Queens. We’d go down in front of where Duke’s is, by the Royals and those places over there. When we were kids, the big guys used to kick our butts and tell us to get the hell out of there. When they weren’t surfing, we’d go out and surf by ourselves. Later on, when we started to get good, the big guys let us in. Duke used to come down to Publics and watch us, especially me, because I was a hotdogger. Then I started to come down to Canoe’s, where Duke and all of them hung out and he started to teach me all the good things, like how to slide and cutback and everything like that. In those days, those guys would catch the wave in one point and go straight down the wall. No turns. But we used to turn. I used to be a hotdogger.

A hotdogger?
Yeah, I was going back and forth and turning in and out. A lot of the big guys, when they were coming down, they would holler and you had to give them the right of way. I used to catch the wave in the back, follow them, cutback, play in and out and come back. It didn’t bother those guys, but the old man Duke used to watch me hotdogging. Then he started to teach me all the finer points of surfing. In other words, he was my teacher.

Do you remember what you were doing in the ’40s, when the war started?
When the war started, it sort of cracked us up. It limited our situation for surfing because the beach was barb-wired. You only had a limited time, say from 8:00am to 4:30pm, to surf. They used to have gun encasements on the beach with barbed wire and all of that. Around 5:00pm every day, they would fire the machine gun right over your head, or in front of you. That meant to come in. It was a curfew, in other words. They used to shoot at us and bullets went flying around us. We got so pissed off. We’d come back and argue with those guys.

They shot guns at you to get you out of the water?
That’s right. I got pissed off and I went up and told those guys. ‘Don’t ever do that again. You hit us and you’re going to be in trouble.’ But those guys were smart alec GI’s. I told them that when they went to sleep, we were going to throw pineapples at them. I said, ‘We’re going to throw them right in the bunkers at you guys, like grenades.’ That sort of cooled them off.

Were you life guarding or working at that time?
I was still in school. Then I started working at the beach with Duke and those guys, as a beach boy. Duke got me the job working down there, teaching surfing, and taking tourists out in the outrigger. He had noticed that I was pretty good, because when I was a kid I used to have my own two-man canoe. He watched me steer and gave me all good points. Once in a while, he’d take me out with a load of tourists and he’d let me steer. He’d sit in back of me. He knew I could handle it. That’s how I got my start.

You got your start with Duke?
Duke was my mentor. He used to call me ‘Son.’ Duke and Nadine took care of me.

How old were you when you started doing the canoes?
I had my own canoe when I was 10. It was a two-man canoe, a little one. We used to park it right where the groin is in Waikiki now. Across the street, a guy named Sonny used to own that property. It had a big stone wall with steps going down to the beach, so I used to pull my canoe up over the wall with a rope, and put it in one of those little red wagons and tow it across the street and keep it at his house.

That must have been fun.
Those were the pristine days. Nobody was there to bother you.

How long did you work as a beach boy?
I got my license when I was 14. He gave me my license, because I could steer the canoes and teach surfing. I used to work at the Outrigger Club with Duke.

Do you still have a stand down there?
No, but I work with the guys that still own the stand. When I’m in town, I’ll go down and work.

Do you remember any of the guys like Phil Edwards and George Downing?
When I was working at the Outrigger Club, it was one of the biggest beach services down there. Later on, years after the war, George Downing got his own stand down there. It didn’t last long, then it phased out. The Outrigger Club kept going because we took care of the Royal Hotel and Moana Hotel and catered to all the rich people and movie stars.

Did you enjoy that?
Yeah, it was a great lifestyle.

Did you ever have any other hobbies besides surf?
Later on, after the war years, I was on and off at the beach. Then I got a job as a stevedore. I liked that because it gave me more time in the water. I worked the night shift and then I’d spend the day at the beach.

Did you party a lot at the Outrigger Club?
That was the center point of our activity. They had a lot of parties. All the beach guys would go hang out with the movie stars and rich people. There were big parties. I just went down there to eat and run. I don’t drink or anything. I’d just mix it up with them and say hello to the big guys. They took me under their wing. They were all good guys.

When did you get married?
Umpteen years ago.

How many kids do you have?
One bunch. I have five kids.

Did you ever do anything else besides surfing?
I worked for the movie companies when they came here to make movies.

How did you like working for the movie companies?
Good money.