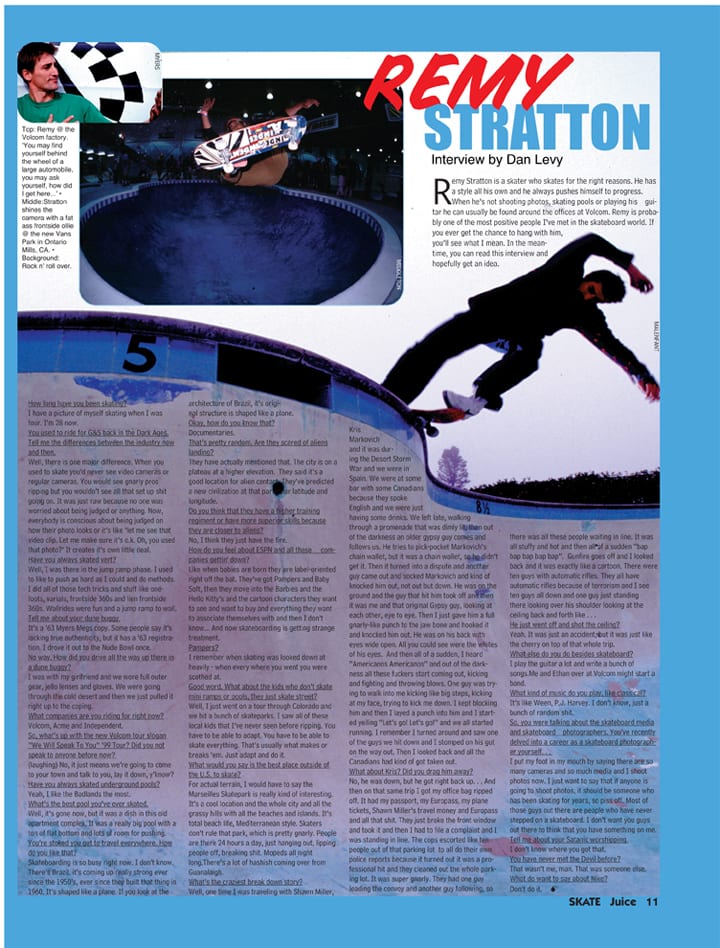 Remy Stratton is a skater who skates for the right reasons. He has a style all his own and he always pushes himself to progress. When he’s not shooting photos, skating pools or playing his guitar he can usually be found around the offices at Volcom. Remy is probably one of the most positive people I’ve met in the skateboard world. If you ever get the chance to hang with him, you’ll see what I mean. In the meantime, you can read this interview and hopefully get an idea.

How long have you been skating?
I have a picture of myself skating when I was four. I’m 28 now.

You used to ride for G&S back in the Dark Ages. Tell me the differences between the industry now and then.
Well, there is one major difference. When you used to skate you’d never see video cameras or regular cameras. You would see gnarly pros ripping, but you wouldn’t see all that set up shit going on. It was just raw because no one was worried about being judged or anything. Now, everybody is conscious about being judged on how their photo looks or it’s like ‘Let me see that video clip. Let me make sure it’s o.k.  Oh, you used that photo?’ It creates it’s own little deal.

Have you always skated vert?
Well, I was there in the jump ramp phase. I used to like to push as hard as I could and do methods. I did all of those tech tricks and stuff like one-foots, varials, frontside 360s and lien frontside 360s. Wallrides were fun and a jump ramp to wall.

Tell me about your dune buggy.
It’s a ‘63 Myers Megs copy. Some people say it’s lacking true authenticity, but it has a ‘63 registration. I drove it out to the Nude Bowl once.

No way. How did you drive all the way up there in a dune buggy?
I was with my girlfriend and we wore full outer gear, jello lenses and gloves. We were going through the cold desert and then we just pulled it right up to the coping.

What companies are you riding for right now?
Volcom, Acme and Independent.

So, what’s up with the new Volcom tour slogan “We Will Speak To You” ‘99 Tour? Did you not speak to anyone before now?
(laughing) No, it just means we’re going to come to your town and talk to you, lay it down, y’know?

Have you always skated underground pools?
Yeah, I like the Badlands the most.

What’s the best pool you’ve ever skated.
Well, it’s gone now, but it was a dish in this old apartment complex. It was a really big pool with a ton of flat bottom and lots of room for pushing.

Okay, how do you know that?
Documentaries.

That’s pretty random. Are they scared of aliens landing?
They have actually mentioned that. The city is on a plateau at a higher elevation. They said it’s a good location for alien contact. They’ve predicted a new civilization at that particular latitude and longitude.

Do you think that they have a higher training regiment or have more superior skills because they are closer to aliens?
No, I think they just have the fire.

How do you feel about ESPN and all these companies gettin’ down?
Like when babies are born they are label-oriented right off the bat. They’ve got Pampers and Baby Soft, then they move into the Barbies and the Hello Kitty’s and the cartoon characters they want to see and want to buy everything and they want to associate themselves with certain things and then I don’t know… And now skateboarding is getting strange treatment.

Pampers?
I remember when skating was looked down at heavily – when every where you went you were scothed at.

Good word. What about the kids who don’t skate mini ramps or pools, they just skate street?
Well, I just went on a tour through Colorado and we hit a bunch of skateparks. I saw all of these local kids that I’ve never seen before ripping. You have to be able to adapt. You have to be able to skate everything. That’s usually what makes or breaks ‘em. Just adapt and do it.

What would you say is the best place outside of the U.S. to skate?
For actual terrain, I would have to say the Marseilles Skatepark is really kind of interesting. It’s a cool location and the whole city and all the grassy hills with all the beaches and islands. It’s total beach life, Mediterranean style. Skaters don’t rule that park, which is pretty gnarly. People are there 24 hours a day, just hanging out, lipping people off, breaking shit. Mopeds all night long.There’s a lot of hashish coming over from Guanalaigh.

What’s the craziest break down story?
Well, one time I was traveling with Shawn Miller, Kris Markovich and it was during the Desert Storm War and we were in Spain. We were at some bar with some Canadians because they spoke English and we were just having some drinks. We left late, walking through a promenade that was dimly lit, then out of the darkness an older gypsy guy comes and follows us. He tries to pick-pocket Markovich’s chain wallet, but it was a chain wallet, so he didn’t get it. Then it turned into a dispute and another guy came out and socked Markovich and kind of knocked him out, not out but down. He was on the ground and the guy that hit him took off and then it was me and that original Gypsy guy, looking at each other, eye to eye. Then I just gave him a full gnarly-like punch to the jaw bone and hooked it and knocked him out. He was on his back with eyes wide open. All you could see were the whites of his eyes.  And then all of a sudden, I heard “Americanos Americanos” and out of the darkness all these fuckers start coming out, kicking and fighting and throwing blows. One guy was trying to walk into me kicking like big steps, kicking at my face, trying to kick me down. I kept blocking him and then I layed a punch into him and I started yelling “Let’s go! Let’s go!” and we all started running. I remember I turned around and saw one of the guys we hit down and I stomped on his gut on the way out. Then I looked back and all the Canadians had kind of got taken out.

What about Kris? Did you drag him away?
No, he was down, but he got right back up. . . And then on that same trip I got my office bag ripped off. It had my passport, my Europass, my plane tickets, Shawn Miller’s travel money and Europass and all that shit. They just broke the front window and took it and then I had to file a complaint and I was standing in line. The cops escorted like ten people out of that parking lot to all do their own police reports because it turned out it was a professional hit and they cleaned out the whole parking lot. It was super gnarly. They had one guy leading the convoy and another guy following, so there was all these people waiting in line. It was all stuffy and hot and then all of a sudden “bap bap bap bap bap”.  Gunfire goes off and I looked back and it was exactly like a cartoon. There were ten guys with automatic rifles. They all have automatic rifles because of terrorism and I see  ten guys all down and one guy just standing there looking over his shoulder looking at the ceiling back and forth like . . .

He just went off and shot the ceiling?
Yeah. It was just an accident, but it was just like the cherry on top of that whole trip.
=====

Top: Remy @ the Volcom factory. ‘You may find yourself behind the wheel of a large automobile, you may ask yourself, how did I get here…’

FOR THE REST OF THE STORY, ORDER JUICE MAGAZINE ISSUE #47. PLEASE CLICK HERE FOR MORE INFORMATION.

PrevPreviousPIPELINE 47
NextTHE GET UP KIDSNext