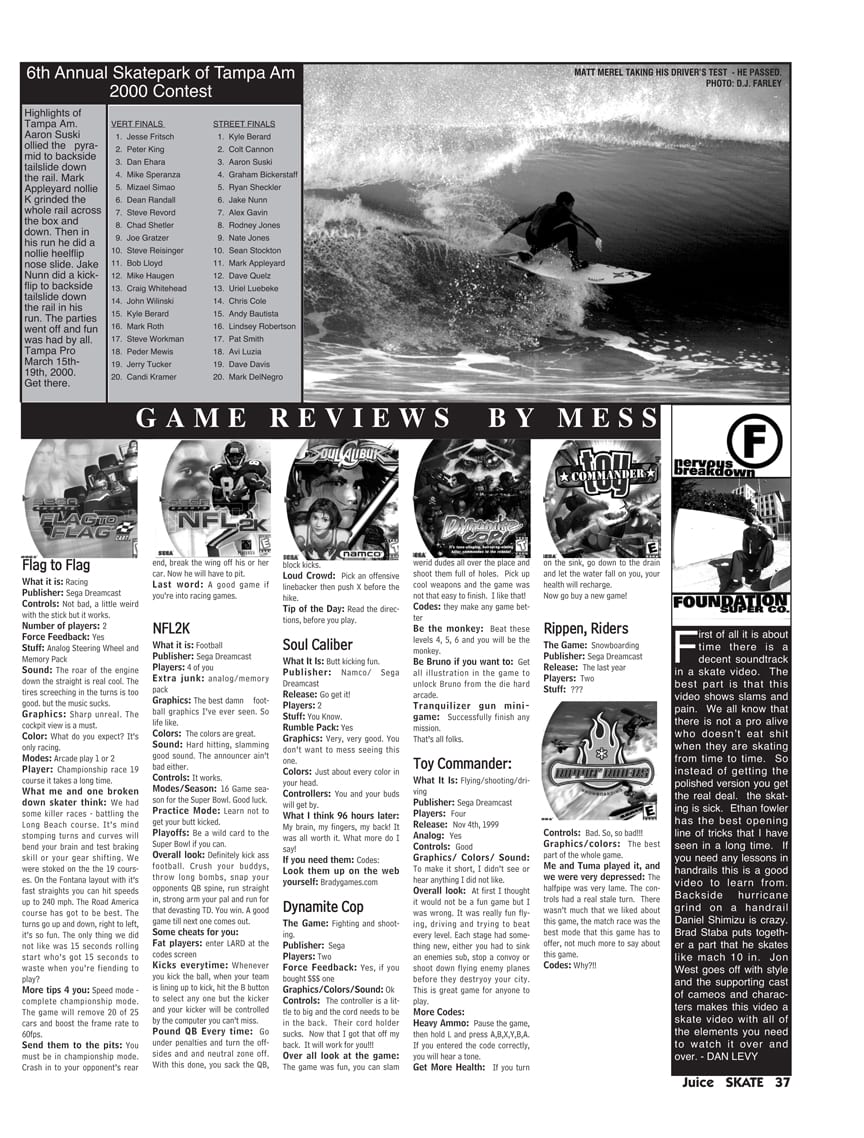 Highlights of Tampa Am.  Aaron Suski ollied the pyramid to backside tailslide down the rail. Mark Appleyard nollie K grinded the whole rail across the box and down. Then in his run he did a nollie heelflip nose slide. Jake Nunn did a kickflip to backside tailslide down the rail in his run. The parties went off and fun was had by all. Tampa Pro March 15th- 19th, 2000.

Flag to Flag
What it is: Racing
Publisher: Sega Dreamcast
Controls: Not bad, a little weird with the stick but it works.
Number of players: 2
Force Feedback: Yes
Stuff: Analog Steering Wheel and Memory Pack
Sound: The roar of the engine down the straight is real cool. The tires screeching in the turns is too good. but the music sucks.
Graphics: Sharp unreal. The cockpit view is a must.
Color: What do you expect? It’s only racing.
Modes: Arcade play 1 or 2
Player: Championship race 19 course it takes a long time.
What me and one broken down skater think: We had some killer races – battling the Long Beach course. It’s mind stomping turns and curves will bend your brain and test braking skill or your gear shifting. We were stoked on the the 19 courses. On the Fontana layout with it’s fast straights you can hit speeds up to 240 mph. The Road America course has got to be best. The turns go up and down, right to left, it’s so fun. The only thing we did not like was 15 seconds rolling start who’s got 15 seconds to waste when you’re fiending to play?
More tips 4 you: Speed mode – complete championship mode.  The game will remove 20 of 25 cars and boost the frame rate to 60fps.
Send them to the pits: You must be in championship mode. Crash in to your opponent’s rear end, break the wing off his or her car. Now he will have to pit.
Last word: A good game if you’re into racing games.

NFL2K
What it is: Football
Publisher: Sega Dreamcast
Players: 4 of you
Extra junk: analog/memory pack
Graphics: The best damn    football graphics I’ve ever seen. So life like.
Colors:  The colors are great.
Sound: Hard hitting, slamming good sound. The announcer ain’t bad either.
Controls: It works.
Modes/Season: 16 Game season for the Super Bowl. Good luck.
Practice Mode: Learn not to get your butt kicked.
Playoffs: Be a wild card to the Super Bowl if you can.
Overall look: Definitely kick ass football. Crush your buddys,  throw long bombs, snap your opponents QB spine, run straight in, strong arm your pal and run for that devasting TD. You win. A good game till next one comes out.
Some cheats for you:
Fat players: enter LARD at the codes screen
Kicks everytime: Whenever you kick the ball, when your team is lining up to kick, hit the B button to select any one but the kicker and your kicker will be controlled by the computer you can’t miss.
Pound QB Every time:  Go under penalties and turn the offsides and and neutral zone off. With this done, you sack the QB, block kicks.
Loud Crowd:  Pick an offensive linebacker then push X before the hike.
Tip of the Day: Read the directions, before you play.

Soul Caliber
What It Is: Butt kicking fun.
Publisher: Namco/ Sega Dreamcast
Release: Go get it!
Players: 2
Stuff: You Know.
Rumble Pack: Yes
Graphics: Very, very good. You don’t want to mess seeing this one.
Colors: Just about every color in your head.
Controllers: You and your buds will get by.
What I think 96 hours later:  My brain, my fingers, my back! It was all worth it. What more do I say!
If you need them: Codes:
Look them up on the web yourself: Bradygames.com

Dynamite Cop
The Game: Fighting and shooting.
Publisher:  Sega
Players: Two
Force Feedback: Yes, if you bought $$$ one
Graphics/Colors/Sound: Ok
Controls:  The controller is a little to big and the cord needs to be in the back.  Their cord holder sucks.  Now that I got that off my back.  It will work for you!!!
Over all look at the game:  The game was fun, you can slam werid dudes all over the place and shoot them full of holes.  Pick up cool weapons and the game was not that easy to finish.  I like that!
Codes: they make any game better
Be the monkey:  Beat these levels 4, 5, 6 and you will be the monkey.
Be Bruno if you want to:  Get all illustration in the game to unlock Bruno from the die hard arcade.
Tranquilizer gun mini-game:  Successfully finish any mission.
That’s all folks.

Toy Commander:
What It Is: Flying/shooting/driving
Publisher: Sega Dreamcast
Players:  Four
Release:  Nov 4th, 1999
Analog:  Yes
Controls:  Good
Graphics/ Colors/ Sound:  To make it short, I didn’t see or hear anything I did not like.
Overall look:  At first I thought it would not be a fun game but I was wrong. It was really fun flying, driving and trying to beat every level. Each stage had something new, either you had to sink an enemies sub, stop a convoy or shoot down flying enemy planes before they destryoy your city.  This is great game for anyone to play.
More Codes:
Heavy Ammo:  Pause the game, then hold L and press A,B,X,Y,B,A.  If you entered the code correctly, you will hear a tone.
Get More Health:  If you turn on the sink, go down to the drain and let the water fall on you, your health will recharge.
Now go buy a new game!

Rippen, Riders
The Game:  Snowboarding
Publisher: Sega Dreamcast
Release:  The last year
Players:  Two
Stuff:  ???
Controls:  Bad. So, so bad!!!
Graphics/colors:  The best part of the whole game.
Me and Tuma played it, and we were very depressed: The halfpipe was very lame. The controls had a real stale turn.  There wasn’t much that we liked about this game, the match race was the best mode that this game has to offer, not much more to say about this game.
Codes: Why?!!

First of all it is about time there is a decent soundtrack in a skate video.  The best part is that this video shows slams and pain.  We all know that there is not a pro alive who doesn’t eat shit when they are skating from time to time, so instead of getting the polished version you get the real deal.  The skating is sick.  Ethan Fowler has the best opening line of tricks that I have seen in a long time.  If you need any lessons in handrails this is a good video to learn from.  Backside hurricane grind on a handrail Daniel Shimizu is crazy.  Brad Staba puts together a part that he skates like mach 10 in.  Jon West goes off with style and the supporting cast of cameos and characters makes this video a skate video with all of the elements you need to watch it over and over. – DAN LEVY