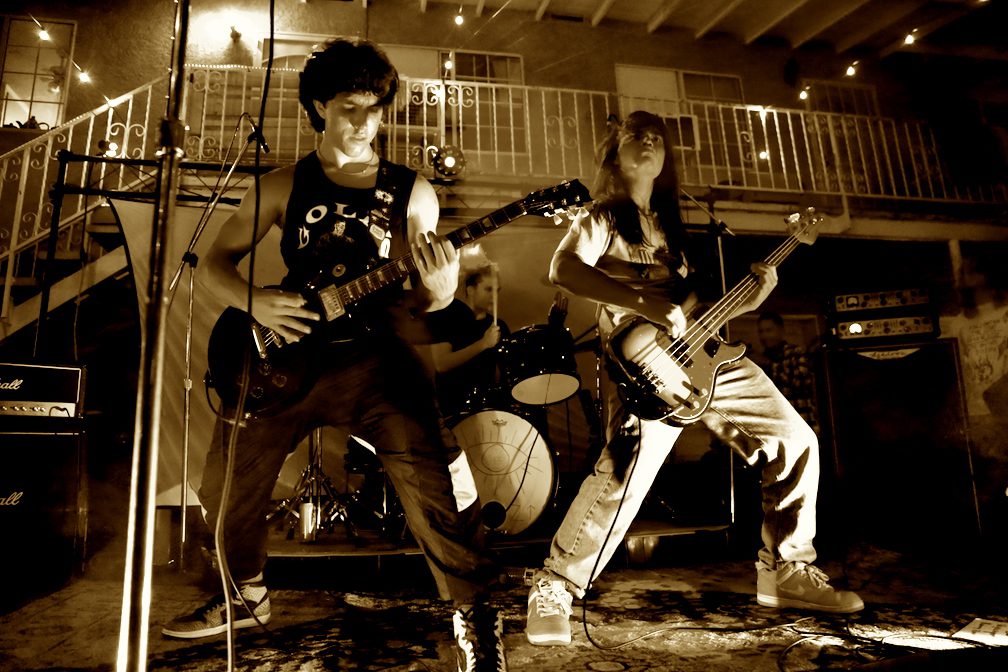 As I pulled up to an OTTTO show on a Saturday night in East LA, cars on the street were double-parked on each side while mariachi music flowed from a multitude of houses. Most would be unaware that a thrash metal band was playing right behind one of the homes, until you turned the corner down the driveway and saw the scene in play.

Going back to the roots of East LA, this Boyle Heights house show was a classic representation of underground music and its sense of community. Each ticket was $5 and the experience was worth thousands. The crowd of neighborhood locals were pumped up to have live thrash music so close to home and demonstrated that appreciation in the pit.

The stacked line-up for the show, on August 14th at House of Abu, included Loverboyrando, The Barflies, Whajadew, Apocalypsis, and A Red Sun, with OTTTO hitting the stage at 10:30PM. Bryan Ferretti, (guitar/vocals), Tye Trujillo (bass/vocals), and Ryan Duswalt (drums) ended the night with an explosion of OTTTO songs such as, “Ride Low,”, “Dance of the Dead” “Ghost Rider”, “Skyscraper” and a cover of Slayer’s “Raining Blood.”

As the pit was going off in a circle of chaos, I turned to look at the crowd and, to my surprise, there was Fletcher Dragge, Pennywise guitarist, watching OTTTO rock, while on the side of the stage, Metallica’s Robert Trujillo was pulling double duty as OTTTO roadie and number one fan of his son, Tye Trujillo.

OTTTO plays from the heart, and you can feel that love wherever they play. It doesn’t matter if it’s in front of thousands or at a backyard rager in Boyle Heights, their passion for the craft shines through.

From the start, OTTTO has always stayed true to its original thrash metal core as they rotate from playing backyards to festivals. In March of 2018, OTTTO’s first performance was at the Juice Magazine headquarters in Venice Beach. A week later, Ottto played at the Venice Skatepark as a featured event for the 420 Games Los Angeles. Despite the recent roadblocks music faced in 2020, the band remains on the rise.

At the beginning of August 2021, OTTTO put on a show in Chicago at Lollapalooza and then returned to its roots of backyard gigs in Los Angeles with the show in mid August in Boyle Heights. Next up, on September 4th, OTTTO will play at the Bottlerock Festival in Napa Valley, with bands such as Milky Chance and Guns N’ Roses.

Alongside all of these gigs and major accomplishments, OTTTO has been in the studio and working on projects non-stop. In 2020, the band dropped their EP album “OTTTO”, and later in 2021, will be releasing its first LP.

Tye Trujillo had this to say about working with Paul Marchand and creating the “Ride Low” music video and his connections to skateboarding reflected in the opening scene, “It was a killer and fun experience working with experienced, award-winning movie director, Paul Marchand. Basically, we wanted a video to represent the area where we come together to rehearse and hang most of the time, which is Venice. We picked the perfect location, and then Paul had some brilliant, cool ideas for the concept. We went with those ideas and decided to get filming! Also, the skateboard, in the beginning, is a brand new Fucking Awesome board I got with some Independent trucks and Bones wheels. It rides low, just like the song, haha!”

When asked about the new OTTTO LP in the works, Ferretti said, “I’m in the studio now and I’m hella excited about this record!”