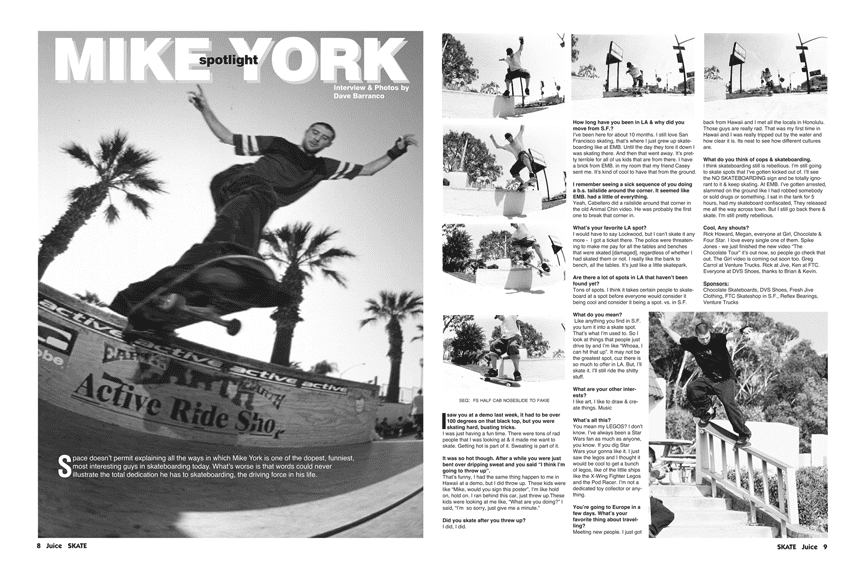 Space doesn’t permit explaining all the ways in which Mike York is one of the dopest, funniest, most interesting guys in skateboarding today. What’s worse is that words could never illustrate the total dedication he has to skateboarding, the driving force in his life.

I saw you at a demo last week, it had to be over 100 degrees on that black top, but you were skating hard, busting tricks.
I was just having a fun time. There were tons of rad people that I was looking at & it made me want to skate. Getting hot is part of it. Sweating is part of it.

It was so hot though. After a while you were just bent over dripping sweat and you said “I think I’m going to throw up”.
That’s funny, I had the same thing happen to me in Hawaii at a demo, but I did throw up. These kids were like “Mike, would you sign this poster”, I’m like hold on, hold on. I ran behind this car, just threw up. These kids were looking at me like, “What are you doing?” I said, “I’m  so sorry, just give me a minute.”

Did you skate after you threw up?
I did, I did.

How long have you been in LA & why did you move from S.F.?
I’ve been here for about 10 months. I still love San Francisco skating, that’s where I just grew up skateboarding like at EMB. Until the day they tore it down I was skating there. And then that went away. It’s pretty terrible for all of us kids that are from there. I have a brick from EMB. in my room that my friend Casey sent me. It’s kind of cool to have that from the ground.

What’s your favorite LA spot?
I would have to say Lockwood, but I can’t skate it any more –  I got a ticket there. The police were threatening to make me pay for all the tables and benches that were skated [damaged], regardless of whether I had skated them or not. I really like the bank to bench, all the tables. It’s just like a little skatepark.

What do you mean?
Like anything you find in S.F. you turn it into a skate spot. That’s what I’m used to. So I look at things that people just drive by and I’m like “Whoaa, I can hit that up”. It may not be the greatest spot, cuz there is so much to offer in LA. But, I’ll skate it. I’ll still ride the shitty stuff.

What’s all this?
You mean my LEGOS? I don’t know. I’ve always been a Star Wars fan as much as anyone, you know. If you dig Star Wars your gonna like it. I just saw the legos and I thought it would be cool to get a bunch of legos, like of the little ships like the X-Wing Fighter Legos and the Pod Racer. I’m not a dedicated toy collector or anything.

You’re going to Europe in a few days. What’s your favorite thing about travelling?
Meeting new people. I just got back from Hawaii and I met all the locals in Honolulu. Those guys are really rad. That was my first time in Hawaii and I was really tripped out by the water and how clear it is. Its neat to see how different cultures are.

What do you think of cops & skateboarding?
I think skateboarding still is rebellious. I’m still going to skate spots that I’ve gotten kicked out of. I’ll see the NO SKATEBOARDING sign and be totally ignorant to it & keep skating. At EMB. I’ve gotten arrested, slammed on the ground like I had robbed somebody or sold drugs or something. I sat in the tank for 5 hours, had my skateboard confiscated, They released me all the way across town. But I still go back there & skate. I’m still pretty rebellious.

Cool, Any shouts?
Rick Howard, Megan, everyone at Girl, Chocolate & Four Star. I love every single one of them. Spike Jones – we just finished the new video “The Chocolate Tour” it’s out now, so people go check that out. The Girl video is coming out soon too. Greg Carrol at Venture Trucks. Rick at Jive, Ken at FTC. Everyone at DVS Shoes, thanks to Brian & Kevin.