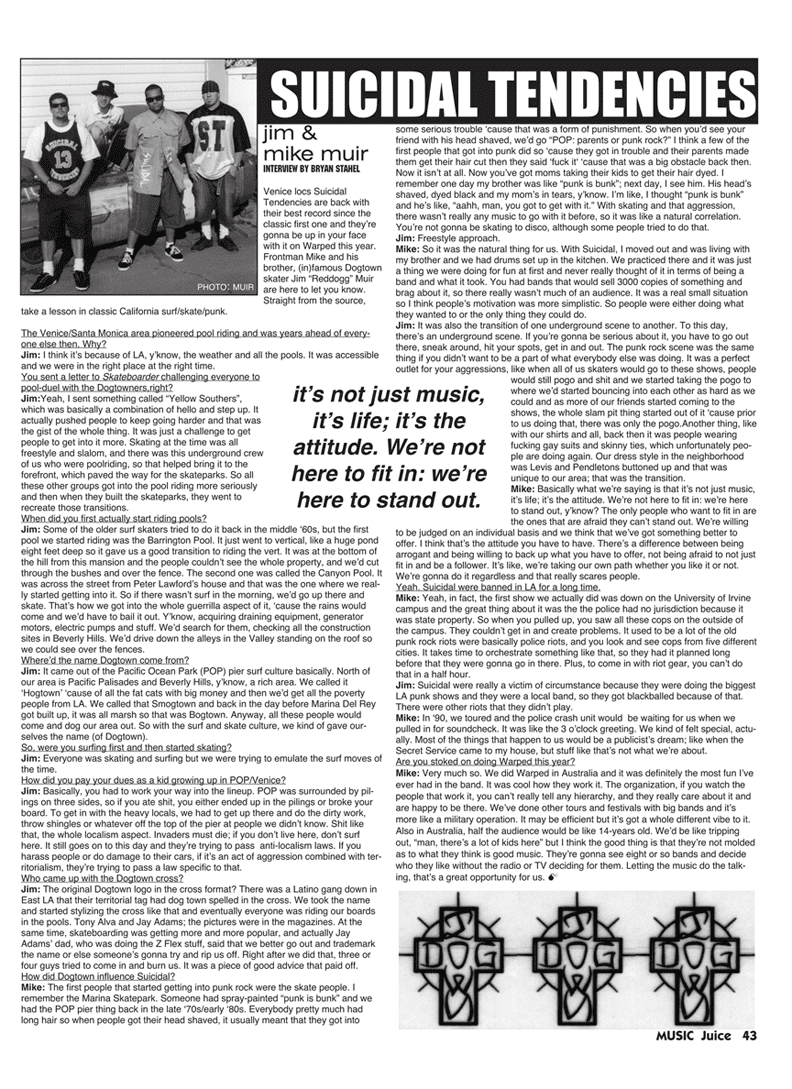 Venice locs Suicidal Tendencies are back with their best record since the classic first one and they’re gonna be up in your face with it on Warped this year. Frontman Mike and his brother, (in)famous Dogtown skater Jim “Red Dog” Muir are here to let you know. Straight from the source, take a lesson in classic California surf/skate/punk.

The Venice/Santa Monica area pioneered pool riding and was years ahead of everyone else. Why?
Jim: I think it’s because of LA, y’know, the weather and all the pools. It was accessible and we were in the right place at the right time.

You sent a letter to Skateboarder challenging everyone to pool-duel with the Dogtowners,right?
Jim: Yeah, I sent something called “Yellow Southers”, which was basically a combination of hello and step up. It actually pushed people to keep going harder and that was the gist of the whole thing. It was just a challenge to get people to get into it more. Skating at the time was all freestyle and slalom, and there was this underground crew of us who were poolriding, so that helped bring it to the forefront, which paved the way for the skateparks. So all these other groups got into the pool riding more seriously and then when they built the skateparks, they went to recreate those transitions.

When did you first actually start riding pools?
Jim: Some of the older surf skaters tried to do it back in the middle ‘60s, but the first pool we started riding was the Barrington Pool. It just went to vertical, like a huge pond eight feet deep so it gave us a good transition to riding the vert. It was at the bottom of the hill from this mansion and the people couldn’t see the whole property, and we’d cut through the bushes and over the fence. The second one was called the Canyon Pool. It was across the street from Peter Lawford’s house and that was the one where we really started getting into it. So if there wasn’t surf in the morning, we’d go up there and skate. That’s how we got into the whole guerrilla aspect of it, ‘cause the rains would come and we’d have to bail it out. Y’know, acquiring draining equipment, generator motors, electric pumps and stuff. We’d search for them, checking all the construction sites in Beverly Hills. We’d drive down the alleys in the Valley standing on the roof so we could see over the fences.

Where’d the name Dogtown come from?
Jim: It came out of the Pacific Ocean Park (POP) pier surf culture basically. North of our area is Pacific Palisades and Beverly Hills, y’know, a rich area. We called it ‘Hogtown’ ‘cause of all the fat cats with big money and then we’d get all the poverty people from LA. We called that Smogtown and back in the day before Marina Del Rey got built up, it was all marsh so that was Bogtown. Anyway, all these people would come and dog our area out. So with the surf and skate culture, we kind of gave ourselves the name (of Dogtown).

So, were you surfing first and then started skating?
Jim: Everyone was skating and surfing but we were trying to emulate the surf moves of the time.

How did you pay your dues as a kid growing up in POP/Venice?
Jim: Basically, you had to work your way into the lineup. POP was surrounded by pilings on three sides, so if you ate shit, you either ended up in the pilings or broke your board. To get in with the heavy locals, we had to get up there and do the dirty work, throw shingles or whatever off the top of the pier at people we didn’t know. Shit like that, the whole localism aspect. Invaders must die; if you don’t live here, don’t surf here. It still goes on to this day and they’re trying to pass  anti-localism laws. If you harass people or do damage to their cars, if it’s an act of aggression combined with territorialism, they’re trying to pass a law specific to that.

Who came up with the Dogtown cross?
Jim: The original Dogtown logo in the cross format? There was a Latino gang down in East LA that their territorial tag had dog town spelled in the cross. We took the name and started stylizing the cross like that and eventually everyone was riding our boards in the pools. Tony Alva and Jay Adams; the pictures were in the magazines. At the same time, skateboarding was getting more and more popular, and actually Jay Adams’ dad, who was doing the Z Flex stuff, said that we better go out and trademark the name or else someone’s gonna try and rip us off. Right after we did that, three or four guys tried to come in and burn us. It was a piece of good advice that paid off.

How did Dogtown influence Suicidal?
Mike: The first people that started getting into punk rock were the skate people. I remember the Marina Skatepark. Someone had spray-painted “punk is bunk” and we had the POP pier thing back in the late ‘70s/early ‘80s. Everybody pretty much had long hair so when people got their head shaved, it usually meant that they got into some serious trouble ‘cause that was a form of punishment. So when you’d see your friend with his head shaved, we’d go “POP: parents or punk rock?” I think a few of the first people that got into punk did so ‘cause they got in trouble and their parents made them get their hair cut then they said ‘fuck it‘ ‘cause that was a big obstacle back then. Now it isn’t at all. Now you’ve got moms taking their kids to get their hair dyed. I remember one day my brother was like “punk is bunk”; next day, I see him. His head’s shaved, dyed black and my mom’s in tears, y’know. I’m like, I thought “punk is bunk” and he’s like, “aahh, man, you got to get with it.” With skating and that aggression, there wasn’t really any music to go with it before, so it was like a natural correlation. You’re not gonna be skating to disco, although some people tried to do that.

Mike: So it was the natural thing for us. With Suicidal, I moved out and was living with my brother and we had drums set up in the kitchen. We practiced there and it was just a thing we were doing for fun at first and never really thought of it in terms of being a band and what it took. You had bands that would sell 3000 copies of something and brag about it, so there really wasn’t much of an audience. It was a real small situation so I think people’s motivation was more simplistic. So people were either doing what they wanted to or the only thing they could do.

Jim: It was also the transition of one underground scene to another. To this day, there’s an underground scene. If you’re gonna be serious about it, you have to go out there, sneak around, hit your spots, get in and out. The punk rock scene was the same thing if you didn’t want to be a part of what everybody else was doing. It was a perfect outlet for your aggressions, like when all of us skaters would go to these shows, people would still pogo and shit and we started taking the pogo to where we’d started bouncing into each other as hard as we could and as more of our friends started coming to the shows, the whole slam pit thing started out of it ‘cause prior to us doing that, there was only the pogo. Another thing, like with our shirts and all, back then it was people wearing suits and skinny ties. Our dress style in the neighborhood was Levis and Pendletons buttoned up and that was unique to our area; that was the transition.

Mike: Basically what we’re saying is that it’s not just music, it’s life; it’s the attitude. We’re not here to fit in: we’re here to stand out, y’know? The only people who want to fit in are the ones that are afraid they can’t stand out. We’re willing to be judged on an individual basis and we think that we’ve got something better to offer. I think that’s the attitude you have to have. There’s a difference between being arrogant and being willing to back up what you have to offer, not being afraid to not just fit in and be a follower. It’s like, we’re taking our own path whether you like it or not. We’re gonna do it regardless and that really scares people.

Yeah. Suicidal were banned in LA for a long time.
Mike: Yeah, in fact, the first show we actually did was down on the University of Irvine campus and the great thing about it was the the police had no jurisdiction because it was state property. So when you pulled up, you saw all these cops on the outside of the campus. They couldn’t get in and create problems. It used to be a lot of the old punk rock riots were basically police riots, and you look and see cops from five different cities. It takes time to orchestrate something like that, so they had it planned long before that they were gonna go in there. Plus, to come in with riot gear, you can’t do that in a half hour.

Jim: Suicidal were really a victim of circumstance because they were doing the biggest LA punk shows and they were a local band, so they got blackballed because of that. There were other riots that they didn’t play.

Mike: In ‘90, we toured and the police crash unit would  be waiting for us when we pulled in for soundcheck. It was like the 3 o’clock greeting. We kind of felt special, actually. Most of the things that happen to us would be a publicist’s dream; like when the Secret Service came to my house, but stuff like that’s not what we’re about.

Are you stoked on doing Warped this year?
Mike: Very much so. We did Warped in Australia and it was definitely the most fun I’ve ever had in the band. It was cool how they work it. The organization, if you watch the people that work it, you can’t really tell any hierarchy, and they really care about it and are happy to be there. We’ve done other tours and festivals with big bands and it’s more like a military operation. It may be efficient but it’s got a whole different vibe to it. Also in Australia, half the audience would be like 14-years old. We’d be like tripping out, “man, there’s a lot of kids here” but I think the good thing is that they’re not molded as to what they think is good music. They’re gonna see eight or so bands and decide who they like without the radio or TV deciding for them. Letting the music do the talking, that’s a great opportunity for us.