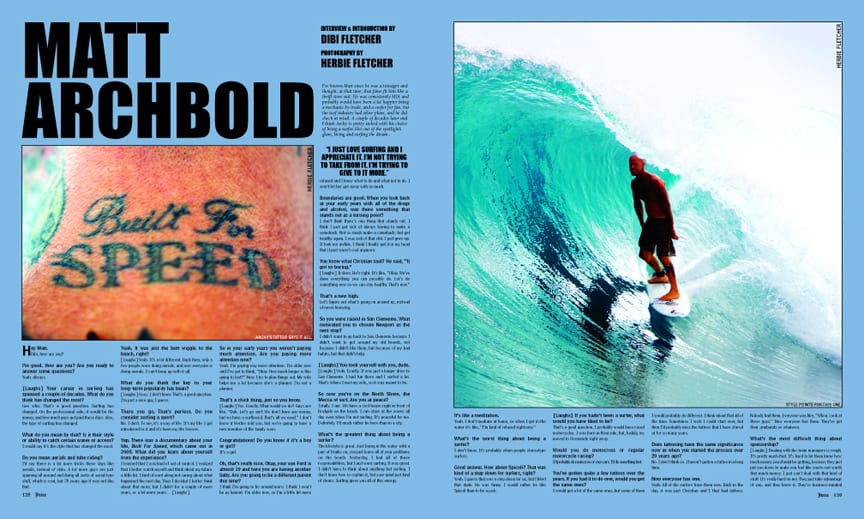 I have known Matt since he was a teenager and thought, at that time, that fame fit him like a thrift store suit. He was consistently MIA and probably would have been a lot happier being a mechanic by trade, and a surfer for fun, but the surf industry had other plans, and he did check at retail. A couple of decades later and I think Archy is pretty stoked with his choice of being a surfer. He’s out of the spotlight’s glare, living and surfing the dream…

“I JUST LOVE SURFING AND I APPRECIATE IT. I’M NOT TRYING TO TAKE FROM IT. I’M TRYING TO GIVE TO IT MORE.”

I’m good. How are you? Are you ready to answer some questions?
Yeah. Always.

What do you mean by that? Is it their style or ability to catch certain waves or access?
I would say it’s the style that has changed the most.

Do you mean aerials and tube riding?
I’d say there is a lot more tricks these days like aerials, instead of style. A lot more guys are just spinning all around and doing all sorts of aerial type stuff, which is cool, but 20 years ago it was not like that.

Yeah. It was just the butt wiggle to the beach, right?
[Laughs] Yeah. It’s a lot different. Back then, only a few people were doing aerials, and now everyone is doing aerials. I can’t keep up with it all.

What do you think the key to your long-term popularity has been?
[Laughs] Geez. I don’t know. That’s a good question. I’m just a nice guy, I guess.

There you go. That’s perfect. Do you consider surfing a sport?
No. I don’t. To me, it’s a way of life. It’s my life. I got introduced to it and it’s been my life forever.

Yep. There was a documentary about your life, Built For Speed, which came out in 2008. What did you learn about yourself from the experience?
I learned that I was kind of out of control. I realized that I better watch myself and think about my future a little bit. I kind of went along not caring about what happened the next day. Then I decided I better think about that more, but I didn’t for a couple of more years, or a lot more years… [Laughs]

So in your early years you weren’t paying much attention. Are you paying more attention now?
Yeah. I’m paying way more attention. I’m older now and I’ve got to think, “Okay. How much longer is this going to last?” Now I try to plan things out. My wife helps me a lot because she’s a planner. I’m not a planner.

That’s a chick thing, just so you know.
[Laughs] Yes. Exactly. What would we do? Guys are like, “Duh. Let’s go surf. We don’t have any money, but we have a surfboard. That’s all we need.” I don’t know if Herbie told you, but we’re going to have a new member of the family soon.

Congratulations! Do you know if it’s a boy or girl?
It’s a girl.

Oh, that’s really nice. Okay, your son Ford is almost 19 and here you are having another baby. Are you going to be a different parent this time?
I think I’m going to be around more. I think I won’t be as lenient. I’m older now, so I’m a little bit more relaxed and I know what to do and what not to do. I won’t let her get away with as much.

Boundaries are good. When you look back at your early years with all of the drugs and alcohol, was there something that stands out as a turning point?
I don’t think there’s one thing that stands out. I think I just got sick of always having to make a comeback. Not so much make a comeback, but get healthy again. I was sick of that shit. I just grew up. It took me awhile. I think I finally got it in my head that it just wasn’t cool anymore.

You know what Christian said? He said, “It got so boring.”
[Laughs] It does. He’s right. It’s like, “Okay. We’ve done everything you can possibly do. Let’s do something new so we can stay healthy. That’s new.”

That’s a new high.
Let’s figure out what’s going on around us, instead of never knowing.