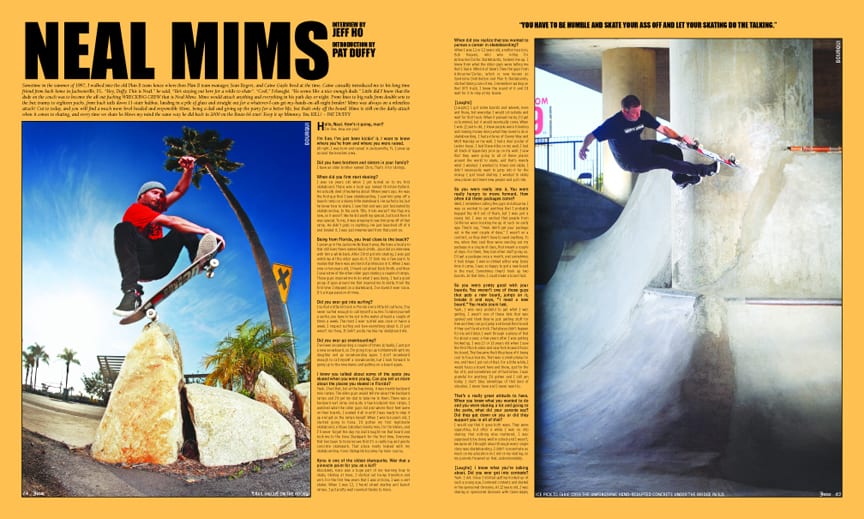 Sometime in the summer of 1997, I walked into the old Plan B team house where then Plan B team manager, Sean Rogers, and Caine Gayle lived at the time. Caine casually introduced me to his long time friend from back home in Jacksonville, FL. “Hey, Duffy. This is Neal.” he said, “He’s staying out here for a while to skate”. “Cool,” I thought. “He seems like a nice enough dude.” Little did I know that the dude on the couch was to become the all out fucking WRECKING CREW that is Neal Mims. Mims would attack anything and everything in his path day or night. From lines to big rails from double sets to the bar, tranny to eighteen packs, from back tails down 11-stair hubbas, landing in a pile of glass and straight out for a whatever-I-can-get-my-hands-on-all-night bender! Mims was always on a relentless attack! Cut to today, and you will find a much more level headed and responsible Mims, being a dad and giving up the party for a better life, but that’s only off the board. Mims is still on the daily attack when it comes to skating, and every time we skate he blows my mind the same way he did back in 2000 on the Route 66 tour! Keep it up Mimmsy. You KILL!

“YOU HAVE TO BE HUMBLE AND SKATE YOUR ASS OFF AND LET YOUR SKATING DO THE TALKING.”

I’m fine. I’ve just been kickin’ it. I want to know where you’re from and where you were raised.
All right. I was born and raised in Jacksonville, FL. I grew up around the beaches area.

Did you have brothers and sisters in your family?
I have an older brother named Chris. That’s it for siblings.

When did you first start skating?
I was six years old when I got turned on to my first skateboard. There was a local guy named Christian Bullard. He actually died of leukemia about fifteen years ago. He was the first guy that I saw skateboarding. I saw him jump off a launch ramp on a skinny little skateboard. He surfed a lot, but he knew how to skate. I saw that and was just fascinated by skateboarding. In the early ‘80s, tricks weren’t like they are now, so it wasn’t like he did anything special, but back then it was special. To me, it was amazing to see him jump off of that ramp. He didn’t grab or anything. He just launched off of it and landed it. I was just mesmerized from that point on.

Being from Florida, you lived close to the beach?
I grew up in the Jacksonville Beach area. We have a local pro that still lives there named Buck Smith. Juice did an interview with him a while back. After I first got into skating, I was just watching all the older guys do it. It took me a few years to realize that there was any kind of profession in it. When I was nine or ten years old, I found out about Buck Smith, and then I saw some of the other older guys skating a couple of ramps. Those guys inspired me to do what I was doing. I had a good group of guys around me that inspired me to skate. From the first time I stepped on a skateboard, I’ve loved it ever since. It’s a huge passion of mine.

Did you ever get into surfing?
I surfed a little bit back in Florida and a little bit out here. I’ve never surfed enough to call myself a surfer. To label yourself a surfer, you have to be out in the water at least a couple of times a week. The most I ever surfed was once or twice a week. I respect surfing and love everything about it. It just wasn’t my thing. It didn’t excite me like my skateboard did.

Did you ever go snowboarding?
I’ve been snowboarding a couple of times. Actually, I just got a new snowboard, so I’m going to go up to Mammoth with my daughter and go snowboarding again. I don’t snowboard enough to call myself a snowboarder, but I look forward to going up to the mountains and getting on a board again.

I know you talked about some of the spots you skated when you were young. Can you tell us more about the places you skated in Florida?
Yeah. I had that, but at the beginning, it was mainly backyard mini ramps. The older guys would tell me about the backyard ramps and I’d get my dad to take me to them. There was a backyard vert ramp and quite a few backyard mini ramps. I watched what the older guys did and where their feet were on their boards. I soaked it all in until I was ready to step it up and get on the ramps myself. When I was ten years old, I started going to Kona. I’d gotten my first legitimate skateboard, a Steve Caballero bonite mini, for Christmas, and I’ll never forget the day my dad brought me that board and took me to the Kona Skatepark for the first time. Everyone that has been to Kona knows that it’s a really big and gnarly concrete skatepark. That place really helped with my skateboarding. Kona Skatepark became my main source.

Kona is one of the oldest skateparks. Was that a pinnacle point for you as a kid?
Absolutely. Kona was a huge part of me learning how to skate. Skating at Kona, I started out loving transition and vert. For the first few years that I was at Kona, I was a vert skater. When I was 12, I found street skating and launch ramps. I got pretty well rounded thanks to Kona.

When did you realize that you wanted to pursue a career in skateboarding?
When I was 11 or 12 years old, another local pro, Bob Reeves, who was riding for Airbourne/Zorlac Skateboards, hooked me up. I knew from what the older guys were telling me that I had a little bit of talent. Then the guys from Airbourne/Zorlac, which is now known as Syndrome Distribution and Plan B Skateboards, started taking care of me. I remember waiting on that UPS truck. I knew the sound of it and I’d wait for it to stop at my house.

[Laughs]
[Laughs] I got some boards and wheels, here and there, but everyday I would sit outside and wait for that truck. When it passed me by, I’d get so bummed, but it would eventually come. When I was 12 years old, I knew people were traveling and making money doing what they loved to do in skateboarding. I had pictures of Danny Way and Matt Hensley on my wall. I had a door poster of Lester Kasai. I had Steve Alba on my wall. I had all kinds of legendary pros up on my wall. I saw that they were going to all of these places around the world to skate, and that’s mainly what I wanted. I wanted to travel and skate. I didn’t necessarily want to jump into it for the money. I just loved skating. I wanted to skate new places and meet new people and just ride.

So you were really into it. You were really hungry to move forward. How often did these packages come?
Well, I remember calling the guys at Airbourne. I was so excited to get anything that I probably bugged the shit out of them, but I was just a young kid. I was so excited that people from California were hooking me up at such an early age. They’d say, “Yeah. We’ll get your package out in the next couple of days.” I wasn’t on a contract, so they didn’t have to send anything. To me, when they said they were sending out my package in a couple of days, that meant a couple of days. For them, they had other stuff going on. I’d get a package once a month, and sometimes it took longer. I was so stoked either way. Every time it came, I was so happy to get a new board in the mail. Sometimes they’d hook up two boards. At that time, I could make a board last.

So you were pretty good with your boards. You weren’t one of those guys that gets a new board, jumps on it, breaks it and says, “I need a new board.” You made yours last.
Yeah, I was very grateful to get what I was getting. I wasn’t one of these kids that was spoiled and think they’re just getting stuff for free and they can just jump and break their board if they can’t land a trick. That phase didn’t happen for me until later. I went through a phase of that for about a year, a few years after I was getting hooked up. I was 15 or 16 years old when I saw the first Plan B video and saw Rick Howard focus his board. That became the little phase of it being cool to focus boards. That was a small phase for me, and then I got out of that. For a little while, I would focus a board here and there, just for the fun of it, and sometimes out of frustration. I was grateful for anything I’d gotten and I still am today. I don’t take advantage of that kind of situation. I never have and I never want to.

That’s a really great attitude to have. When you knew what you wanted to do and you were skating a lot and going to the parks, what did your parents say? Did they get down on you or did they support you in all of this?
I would say that it goes both ways. They were supportive, but after a while I was so into skating that nothing else mattered. I was supposed to be doing well in school and I wasn’t, because all I thought about through every single class was skateboarding. I didn’t concentrate as much on my education as I did on my skating, so my parents frowned on that, understandably.

[Laughs] I know what you’re talking about. Did you ever get into contests?

Yeah. I did. Since I started getting hooked up at such a young age, I entered contests and skated in the sponsored divisions. At 12 years old, I was skating in sponsored divisions with Caine Gayle, Clyde Singleton and Kevin Davis. There were a few of the older guys around the area that were really good too. Brian Childers was there. All of the older guys were skating the sponsored division. They were four or five years older than me. I was one of the only young kids that would enter the sponsored division and go up against those guys. I’d get top three in every one of those contests. I enjoyed that. I’m not so much into the competitive state of mind now, but when there were contests I was always at them. My dad took me to them and I ended up doing well. I still have my trophies from ’88, ’89 and ’90 from those contests.