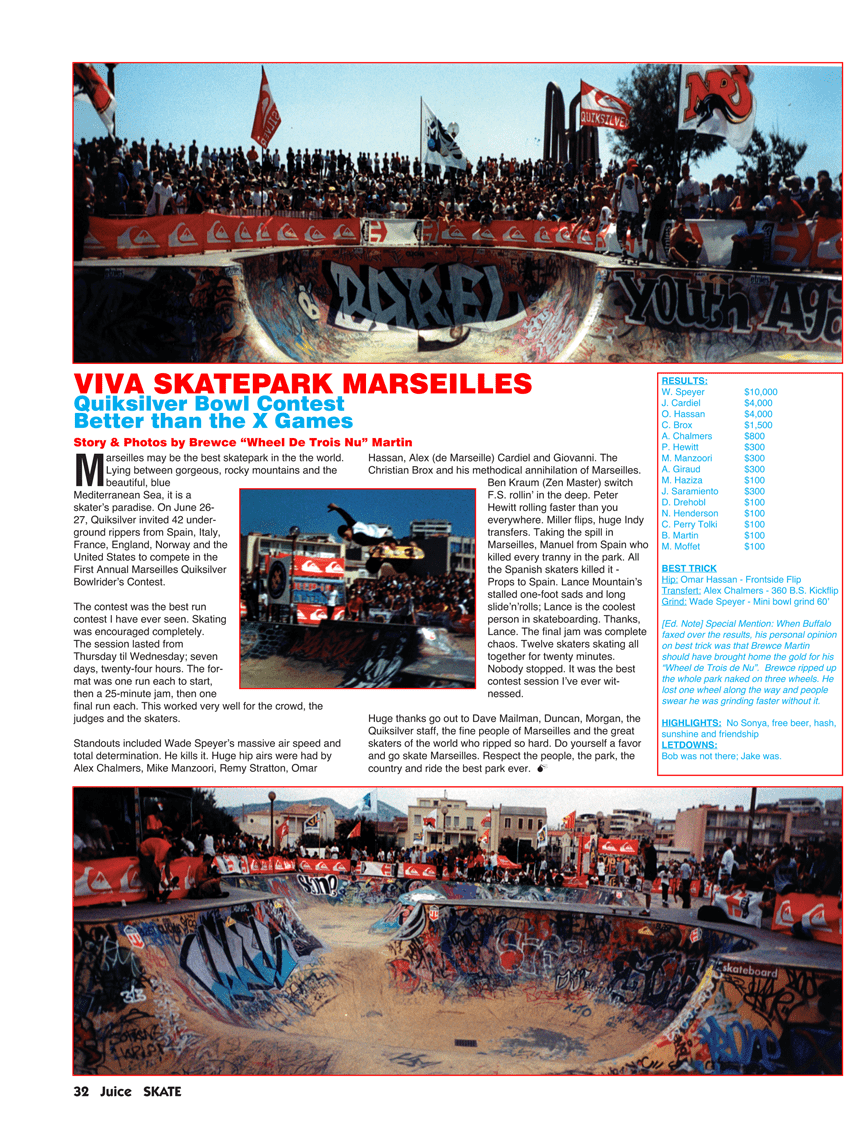 Marseille may be the best skatepark in the the world. Lying between gorgeous, rocky mountains and the beautiful, blue Mediterranean Sea, it is a skater’s paradise. On June 26-27, Quiksilver invited 42 underground rippers from Spain, Italy, France, England, Norway and the United States to compete in the First Annual Marseilles Quiksilver Bowlrider’s Contest.

The contest was the best run contest I have ever seen. Skating was encouraged completely.  The session lasted from Thursday til Wednesday; seven days, twenty-four hours. The format was one run each to start, then a 25-minute jam, then one final run each. This worked very well for the crowd, the judges and the skaters.

Standouts included Wade Speyer’s massive air speed and total determination. He kills it. Huge hip airs were had by Alex Chalmers, Mike Manzoori, Remy Stratton, Omar Hassan, Alex (de Marseille) Cardiel and Giovanni. The Christian Brox and his methodical annihilation of Marseille. Ben Kraum (Zen Master) switch F.S. rollin’ in the deep. Peter Hewitt rolling faster than you everywhere. Miller flips, huge Indy transfers. Taking the spill in Marseille, Manuel from Spain who killed every tranny in the park. All the Spanish skaters killed it – Props to Spain. Lance Mountain’s stalled one-foot sads and long slide’n’rolls; Lance is the coolest person in skateboarding. Thanks, Lance. The final jam was complete chaos. Twelve skaters skating all together for twenty minutes. Nobody stopped. It was the best contest session I’ve ever witnessed.

Huge thanks go out to Dave Mailman, Duncan, Morgan, the Quiksilver staff, the fine people of Marseilles and the great skaters of the world who ripped so hard. Do yourself a favor and go skate Marseille. Respect the people, the park, the country and ride the best park ever.

[Ed. Note] Special Mention: When Buffalo faxed over the results, his personal opinion on best trick was that Brewce Martin should have brought home the gold for his “Wheel de Trois de Nu”.  Brewce ripped up the whole park naked on three wheels. He lost one wheel along the way and people swear he was grinding faster without it.