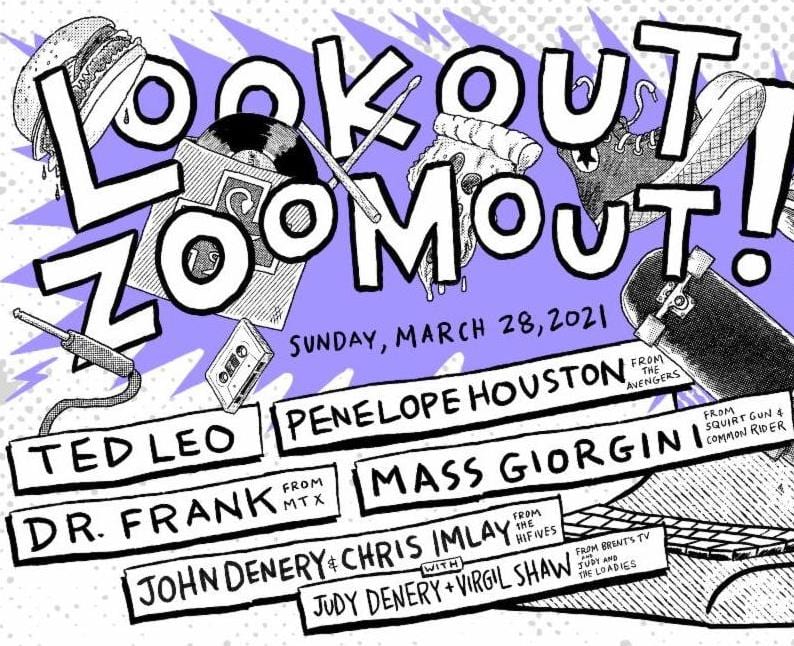 Lookout Zoomout 3 with Punk Legend Penelope Houston of The Avengers

The third Lookout Zoomout will occur live on Sunday March 28 at noon PT / 3pm ET and promises to be another interactive experience with fans from around the world. Tickets are available now: https://sidedooraccess.com/shows/rP25u1OcvgO47KwOYIVp

The second show, which was held on Sunday February 28, was another huge, feel-good success, attracting fans from 15 different countries around the world who enjoyed the live show, interacting with the performers, which included Dan Vapid from Screeching Weasel / the Riverdales / the Cheats, Dr. Frank from the Mr. T Experience, Rose Melberg from Go Sailor, Kepi from the Groovie Ghoulies, and Lookout founder, Larry Livermore.

Check out the highlights from Lookout Zoomout 1, featuring the Queers, Lisa Marr from cub, Jon Ginoli from Pansy Division and more here.

– Penelope Houston from the Avengers… one of the pioneering women of the first wave of American punk, Houston formed the San Francisco band the Avengers in 1977 before going on to a long and award-winning multidisciplinary career in Europe and America as a solo musician and painter. The Avengers released an album on Lookout in 1999, leading to a rebirth of the band.

– Dr. Frank from the Mr. T Experience … arguably the architect of the modern pop punk in sound and lyrical style, Dr. Frank and his Berkeley-based band were on Lookout longer than any other artist.

– John Denery and Chris Imlay from the Hi-Fives, Brent’s TV, and the Ne’er Do Wells…. purveyors of low-budget, high-energy, nattily attired thrift shop garage rock, Imlay and Denery were involved in some of Lookout’s most beloved and charming bands. The guys will be joined by special guests Judy Denery from the Loadies and Virgil Shaw from Brent’s TV.

– Grant Lawrence from the Smugglers… the lead singer of the Vancouver garage rock ‘n’ roll band that was on Lookout from 1995-2005.

The Lookout Zoomout reunions bring together the singers and songwriters from Lookout Records, the iconic pop-punk record label founded in 1987 by Larry Livermore and David Hayes. Until its demise in 2012, the label had one of the most recognizable logos in the world, and was most notable for bands like Green Day, Operation Ivy, the Donnas, the Mr. T Experience, and Screeching Weasel.