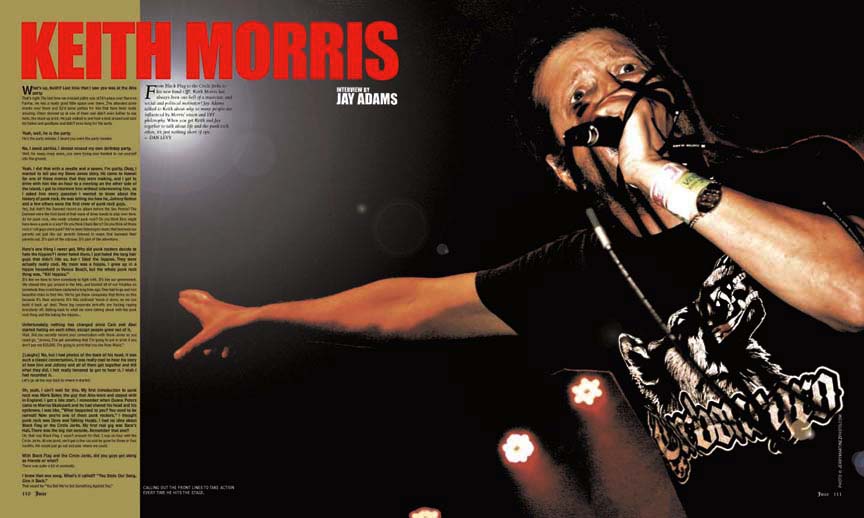 From Black Flag to the Circle Jerks to his new band Off!, Keith Morris has always been one hell of a musician, and social and political motivator! Jay Adams talked to Keith about why so many people are influenced by Morris’ vision and DIY philosophy. When you get Keith and Jay together to talk about life and the punk rock ethos, it’s just nothing short of epic. – DAN LEVY

What’s up, Keith? Last time that I saw you was at the Alva party.
That’s right. The last time we crossed paths was at TA’s place over there on Fairfax. He has a really good little space over there. I’ve attended some events over there and DJ’d some parties for him that have been really amazing. Olson showed up at one of them and didn’t even bother to say hello, the stuck-up prick. He just walked in and took a look around and said his hellos and goodbyes and didn’t even hang for the party.

No, I avoid parties. I almost missed my own birthday party.
Well, for many, many years, you were trying your hardest to run yourself into the ground.

Yeah. I did that with a needle and a spoon. I’m guilty. Okay, I wanted to tell you my Steve Jones story. He came to Hawaii for one of those movies that they were making, and I got to drive with him like an hour to a meeting on the other side of the island. I got to interview him without interviewing him, so I asked him every question I wanted to know about the history of punk rock. He was telling me how he, Johnny Rotten and a few others were the first crew of punk rock guys.
Yes, but didn’t the Damned record an album before the Sex Pistols? The Damned were the first band of that wave of limey bands to play over here. As for punk rock, who really created punk rock? Do you think Elvis might have been a punk in a way? Do you think Chuck Berry? Do you think all those rock n’ roll guys were punk? We’ve been listening to music that bummed our parents out just like our parents listened to music that bummed their parents out. It’s part of the odyssey. It’s part of the adventure.

Here’s one thing I never got. Why did punk rockers decide to hate the hippies? I never hated them. I just hated the long hair guys that didn’t like us, but I liked the hippies. They were actually really cool. My mom was a hippie. I grew up in a hippie household in Venice Beach, but the whole punk rock thing was, “Kill hippies.”
It’s like we have to have somebody to fight with. It’s like our government. We chased this guy around in the hills, and blamed all of our troubles on somebody they could have captured a long time ago. They had to go and ruin beautiful cities to find him. We’ve got these companies that thrive on this because it’s their economy. It’s this continual ‘knock it down, so we can build it back up’ deal. These big corporate jerk-offs are fucking ripping everybody off. Getting back to what we were talking about with the punk rock thing and the hating the hippies…

Unfortunately, nothing has changed since Cain and Abel started hating on each other, except people grow out of it.
Wait. Did you secretly record your conversation with Steve Jones so you could go, “Jonesy, I’ve got something that I’m going to put in print if you don’t pay me $10,000. I’m going to print that you like Roxy Music.”

[Laughs] No, but I had photos of the back of his head. It was such a classic conversation. It was really cool to hear his story of how him and Johnny and all of them got together and did what they did. I felt really honored to get to hear it. I wish I had recorded it.
Let’s go all the way back to where it started.

Oh, yeah. I can’t wait for this. My first introduction to punk rock was Mark Baker, the guy that Alva went and stayed with in England. I got a late start. I remember when Duane Peters came to Marina Skatepark and he had shaved his head and his eyebrows. I was like, “What happened to you? You used to be normal! Now you’re one of them punk rockers.” I thought punk rock was Devo and Talking Heads. I had no idea about Black Flag or the Circle Jerks. My first real gig was Bace’s Hall. There was the big riot outside. Remember that one?
Oh, that was Black Flag. I wasn’t present for that. I was on tour with the Circle Jerks. At one point, we’d get in the van and be gone for three or four months. We would just go out and play where we could.

With Black Flag and the Circle Jerks, did you guys get along as friends or what?
There was quite a bit of animosity.

I know that one song. What’s it called? “You Stole Our Song. Give it Back.”
That would be “You Bet We’ve Got Something Against You.”

Was that regarding you guys?
Yes. I found out later that the only guy that really disliked me in Black Flag was Greg Ginn. All the other guys were cool. I’ve heard from Robo and I talk with Chuck Dukowski all the time. They were really upset when I left.

They should have been. [Laughs] Chavo was good. Dez was great, but your stuff is my favorite Black Flag.
Henry was pretty amazing too.

Henry was good too.
He was no slouch.

I personally liked his earlier stuff. What was his band before from Washington D.C.?
S.O.A.

I agree. He was in the band Black Flag that had a lot of amazing singers before him, but he filled in pretty good. I love Henry. He’s a nice guy.
I hung out with Ian MacKaye at Coachella. He’s Henry’s best friend from Washington, D.C. It is always a blast to see your friends and see that they’re still alive and flourishing and great things are happening for them.