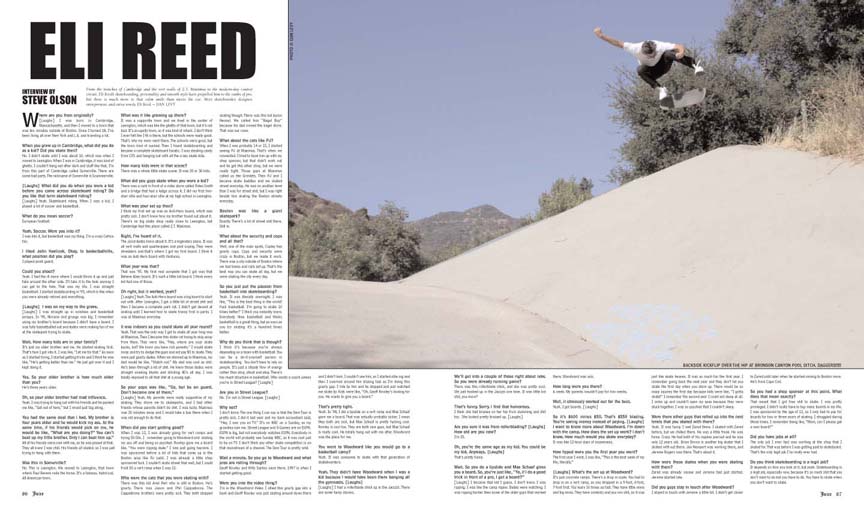 It’s in the soul…Eli Reed loves to roll, from the start until now, it’s easy to see how, Eli let’s it be known…in it for the long run…or so it seems… That’s what you get… Now.

“Skateboarding is about just skating everything you can as hard as you can. You can’t hold back.”

Where are you from originally?
[Laughs] I was born in Cambridge, Massachusetts, and then I moved to a town that was ten minutes outside of Boston. Since I turned 18, I’ve been living all over New York and L.A. and traveling a lot.

When you grew up in Cambridge, what did you do as a kid? Did you skate then?
No. I didn’t skate until I was about 10, which was when I moved to Lexington. When I was in Cambridge, it was kind of ghetto. I couldn’t hang out after dark and stuff like that. I’m from this part of Cambridge called Somerville. There are some bad parts. The nickname of Somerville is Scummerville.

What do you mean soccer?
European football.

Yeah. Soccer. Were you into it?
I was into it, but basketball was my thing. I’m a crazy Celtics fan.

I liked John Havlicek. Okay. In basketballville, what position did you play?
I played point guard.

Could you shoot?
Yeah. I had the ill move where I would throw it up and just fake around the other side. I’ll take it to the hole anyway I can get to the hole. That was my life. I was straight basketball. I started skateboarding in ‘95, which is like when you were already retired and everything.

[Laughs] I was on my way to the grave.
[Laughs] I was straight up in swishies and basketball jerseys. In ‘95, Nirvana and grunge was big. I remember using my brother’s board because I didn’t have a board. I was fully basketballed out and dudes were making fun of me at the skatepark trying to skate.

Wait. How many kids are in your family?
It’s just my older brother and me. He started skating first. That’s how I got into it. I was like, “Let me try that.” As soon as I started trying, I started getting tricks and I think he was like, “He’s getting better than me.” He just got over it and I kept doing it.

Yes. So your older brother is how much older than you?
He’s three years older.

Oh, so your older brother had mad influence.
Yeah. I was trying to hang out with his friends and he punked me like, “Get out of here,” but I would just tag along.

You had the same deal that I had. My brother is four years older and he would kick my ass. At the same time, if his friends would pick on me, he would be like, “What are you doing?” You can’t beat up my little brother. Only I can beat him up.”
All of his friends were cool with me, so he was pissed at that. They all knew I was chill. His friends all skated, so I was just trying to hang with them.

Was this in Somerville?
No. This is Lexington. We moved to Lexington, that town where Paul Revere rode the horse. It’s a famous, historical, All-American town.

What was it like growing up there?
It was a yuppyville town and we lived in the center of Lexington, which was like the ghetto of that town, but it’s not bad. It’s an uppity town, so it was kind of whack. I don’t think I ever felt like I fit in there, but the schools were really good. That’s why my mom went there. The schools were good, but the town kind of sucked. Then I found skateboarding and became a complete skateboard fanatic. I was stealing candy from CVS and hanging out with all the crazy skate kids.

How many kids were in that scene?
There was a whole little skate scene. It was 20 or 30 kids.

What did you guys skate when you were a kid?
There was a curb in front of a video store called Video Smith and a bridge that had a ledge across it. I did my first two-stair ollie and four-stair ollie at my high school in Lexington.

What was your set up then?
I think my first set up was an Anti-Hero board, which was pretty sick. I don’t know how my brother found out about it. There’s no big skate shop really close to Lexington, but Cambridge had this place called Z.T. Maximus.

Right. I’ve heard of it.
The Juice dudes know about it. It’s a legendary place. It was all vert walls and quarterpipes and pool coping. They were shredders and that’s where I got my first board. I think it was an Anti-Hero board with Ventures.

What year was that?
That was ‘95. My first real complete that I got was that Believe Alien board. It’s such a little kid board. I think every kid had one of those.

Oh right, but it worked, yeah?
[Laughs] Yeah. The Anti-Hero board was a big board to start out with. After Lexington, I got a little bit of street shit and then I became a complete park rat. I didn’t get decent at skating until I learned how to skate tranny first in parks. I was at Maximus everyday.