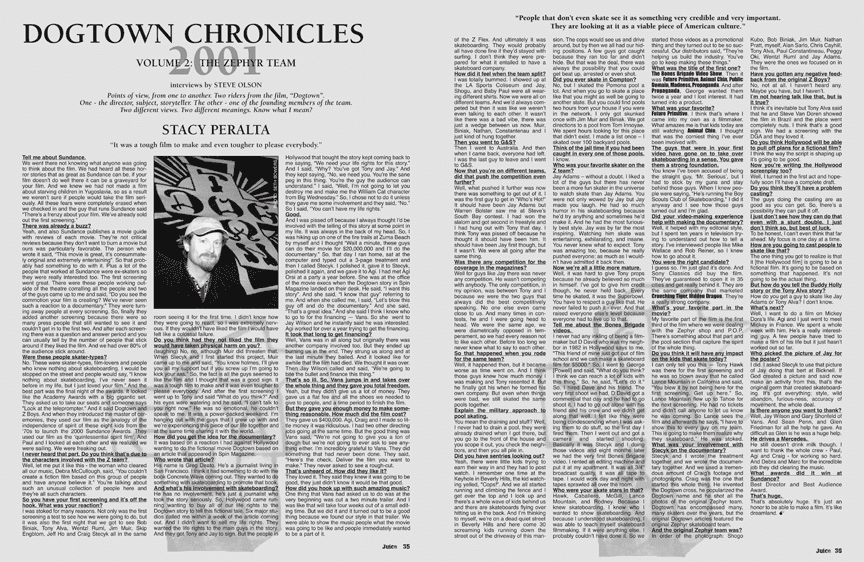 Tell me about Sundance.
We went there not knowing what anyone was going to think about the film. We had heard all these horror stories that as great as Sundance can be, if your film doesn’t do well there it can be a graveyard for your film. And we knew we had not made a film about starving children in Yugoslavia, so as a result we weren’t sure if people would take the film seriously. All these fears were completely erased when we checked in and the guy that runs Sundance said “There’s a frenzy about your film. We’ve already sold out the first screening.”

“When Stecyk and I first started this project, Muir came up to me and said, “You know holmes, I’ll give you all my support, but if you screw up I’m going to kick your ass.” The fact is all the guys seemed to like the film and I thought that was a good sign. It was a tough film to make and it was even tougher to please everybody.”

There was already a buzz?
Yeah, and also Sundance publishes a movie guide with reviews of each movie. They’re not critical reviews because they don’t want to burn a movie, but ours was particularly favorable. The person who wrote it said, “This movie is great, it’s consummately original and extremely entertaining”. So that probably had something to do with it. Plus a lot of the people that worked at Sundance were ex-skaters so they were really interested too. The first screening went great. There were these people working outside of the theater corralling all the people and two of the guys came up to me and said, “Do you see the commotion your film is creating? We’ve never seen such a reaction to a documentary.” They were turning away people at every screening. So, finally they added another screening because there were so many press people that still wanted to see it and couldn’t get in to the first two. After each screening there was a question and answer period and you can usually tell by the number of people that stick around if they liked the film. And we had over 80% of the audience stick around.

Were these people skater-types?
No. These were skater-types, film-lovers and people who knew nothing about skateboarding. I would be stopped on the street and people would say, “I know nothing about skateboarding, I’ve never seen it before in my life, but I just loved your film.” And the best part was the final night of the awards. It looked like the Academy Awards with a big gigantic set. They asked us to take our seats and someone says “Look at the teleprompter.” And it said Dogtown and Z Boys. And when they introduced the master of ceremonies, they used our film as the analogy of the independence of spirit of these eight kids from the ’70s to launch the 2000 Sundance Awards. They used our film as the ‘quintessential spirit film’. Paul and I looked at each other and we realized we were sailing. We were freaking out.

Do you think that’s due to the characters involved with the Zephyr team?
Well, let me put it like this – the woman who cleared all our music, Debra McCullough, said, “You couldn’t create a fiction film based on this group of people and have anyone believe it.” You’re talking about such an unusual collection of people here and they’re all such characters.

So you have your first screening and it’s off the hook. What was your reaction?
I was stoked for many reasons. Not only was the first screening a test to see how we were going to do, but it was also the first night that we got to see Bob Biniak, Tony Alva, Wentzle Ruml, Jim Muir, Skip Engblom, Jeff Ho and Craig Stecyk all in the same room seeing it for the first time. I didn’t know how they were going to react, so I was extremely nervous. If they wouldn’t have liked the film, I would have felt like a colossal failure.

Do you think had they not liked the film they would have taken physical harm on you?
(laughing) No, no, although Muir did threaten that. When Stecyk and I first started this project, Muir came up to me and said, “You know holmes, I’ll give you all my support but if you screw up I’m going to kick your ass.” So, the fact is all the guys seemed to like the film and I thought that was a good sign. It was a tough film to make and it was even tougher to please everybody. And after the first screening I went up to Tony and said “What do you think?” And his eyes were watering and he said, “I can’t talk to you right now.” He was so emotional, he couldn’t speak to me. It was a power-packed weekend. I’m hanging out with the guys that I grew up with and we’re experiencing this piece of our life together and at the same time sharing it with the world.

How did you get the idea for the documentary?
It was based on a reaction I had against Hollywood wanting to do the fictional movie Dogtown based on an article that appeared in Spin Magazine.

Who wrote that article?
His name is Greg Deato. He’s a journalist living in San Francisco. I think it had something to do with the book Concrete Wave coming out. They wanted to do something with skateboarding to promote that book.

And what’s his involvement with skateboarding?
He has no involvement, he’s just a journalist who took the story seriously. So, Hollywood came running wanting to buy all of our life rights to the Dogtown story to tell this fictional tale. Six major studios called me within a week of the article coming out. And I didn’t want to sell my life rights. They wanted the life rights to the main guys in the story. And they got Tony and Jay to sign. But the people in Hollywood that bought the story kept coming back to me saying, “We need your life rights for this story.” And I said, “Why? You’ve got Tony and Jay.” And they kept saying, “No, we need you. You’re the sane peg in this thing. You’re the guy the audience can understand.” I said, “Well, I’m not going to let you destroy me and make me the William Cat character from Big Wednesday.” So, I chose not to do it unless they gave me some involvement and they said, “No.” So I said, “You can’t have my life rights.”

Good.
And I was pissed off because I always thought I’d be involved with the telling of this story at some point in my life. It was always in the back of my head. So, I was hiking up on one of the fire trails at Zuma Beach by myself and I thought “Wait a minute, these guys can do their movie for $20,000,000 and I’ll do the documentary.” So, that day I ran home, sat at the computer and typed out a 3-page treatment and then I called Stecyk. I polished it, gave it to Stecyk, polished it again, and we gave it to Agi. I had met Agi Orsi at a party a year before. She was at the office of the movie execs when the Dogtown story in Spin Magazine landed on their desk. He said, “I want this story”. And she said, “I know that guy” referring to me. And when she called me, I said, “Let’s blow this guy off and do the documentary.” And she said, “That’s a great idea.” And she said I think I know who to go to for the financing – Vans. She went to Jay Wilson and he instantly said he was interested. Agi worked for over a year trying to get the financing.

It took that long to get financing?
Well, Vans was in all along but originally there was another company involved too. But they ended up burning us in the end. They strung us along and at the last minute they bailed. And it looked like for awhile that the film had died. We thought it was over. Then Jay Wilson called and said, “We’re going to bite the bullet and finance this thing.”

That’s so ill. So, Vans jumps in and takes over the whole thing and they gave you total freedom.
Yeah, but they didn’t give us a lot of money. They gave us a flat fee and all the shoes we needed to give to people, and a time period to finish the film. But they gave you enough money to make something reasonable.

How much did the film cost?
They gave us $400,000. Agi, Craig and I made so little money it was ridiculous. I had two other directing jobs going at the same time. But the good thing was Vans said, “We’re not going to give you a ton of dough but we’re not going to ever ask to see anything either. I’m incredibly grateful to Vans. They did something that had never been done. They said, “Here’s the check. Deliver the film you want to make.” They never asked to see a rough-cut. That’s unheard of.

How did they like it?
They loved it. They said they knew it was going to be good, they just didn’t know it would be that good.