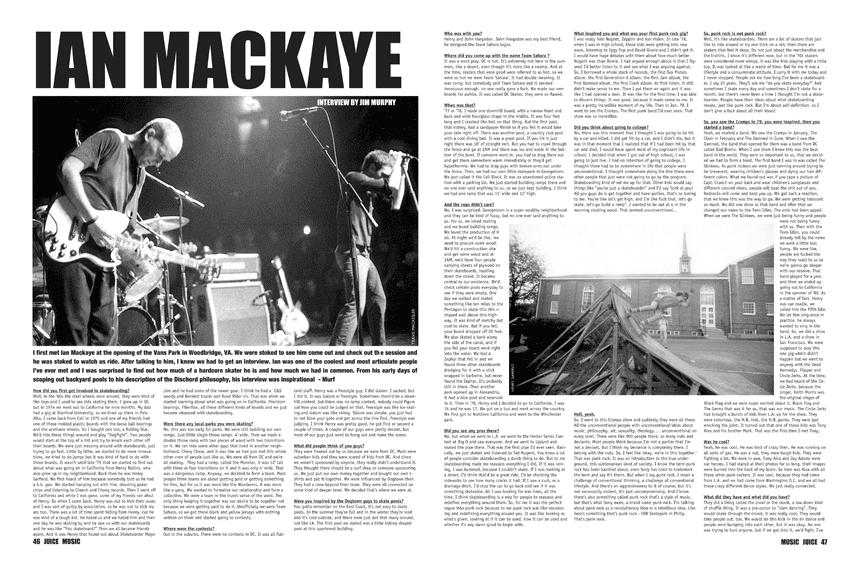 I first met Ian MacKaye at the opening of the Vans Park in Woodbridge, VA. We were stoked to see him come out and check out the session and he was stoked to watch us ride. After talking to him, I knew we had to get an interview. Ian was one of the coolest and most articulate people I’ve ever met and I was surprised to find out how much of a hardcore skater he is and how much we had in common. From his early days of scoping out backyard pools to his description of the Dischord philosophy, his interview was inspirational.

How did you first get involved in skateboarding?
Well, in the ’60s the steel wheels were around, they were kind of like toys and I used to see kids skating them. I grew up in DC, but in 1974 we went out to California for nine months. My dad had a gig at Stanford University, so we lived up there in Palo Alto. I came back from Cali in 1975 and one of my friends had one of those molded plastic boards with the loose ball bearings and the urethane wheels. So I bought one too, a Rolling Star. We’d ride these things around and play “Dogfight”. Two people would start at the top of a hill and try to knock each other off their boards. We were just messing around with skateboards, just trying to go fast. Little by little, we started to do more innovations, we tried to do jumps but it was kind of hard to do with those boards. It wasn’t until late ’75 that we started to find out about what was going on in California from Henry Rollins, who also grew up in my neighborhood. Back then he was Henry Garfield. We first heard of him because somebody told us he had a b.b. gun. We started hanging out with him, shooting poker chips and listening to Cheech and Chong records. Then I went off to California and while I was gone, some of my friends ran afoul of Henry. So when I came back, Henry was out to kick their asses and I was sort of guilty by association, so he was out to kick my ass too. There was a lot of time spent hiding from Henry, cuz he was kind of a tough kid. He hated us and we hated him and then one day he was skating by and he saw us with our skateboards and he was like “You skateboard?” Then we all became friends again. And it was Henry that found out about Skateboarder Magazine and he had some of the newer gear. I think he had a G&S woody and Bennett trucks and Road Rider 4’s. That was when we started learning about what was going on in California. Precision bearings, Fiberflex, all these different kinds of boards and we just became obsessed with skateboarding.

“SOMEWHERE THERE ARE KIDS IN SOME BASEMENT ROCKIN’ IT OUT AND COMING UP WITH NEW IDEAS. THAT’S REALLY WHAT I’M MOST DEDICATED TO. NOT THAT I FEEL LIKE I’M GOING TO BE A PART OF THAT, BUT THE IDEA IS THAT I’M TRYING TO STAY COMMITTED TO THE IDEA OF THE UNDERGROUND. I DON’T WANT TO JUST POLISH UP THIS GIFT AND SELL IT TO SOMEBODY. I’M TRYING TO KEEP IT IN GOOD SHAPE SO IT CAN BE HANDED OFF TO SOMEONE ELSE.”

Were there any local parks you were skating?
No, this was too early for parks. We were still building our own ramps. Just little single throw ramps, 4′ wide. Then we made a double throw ramp with two pieces of wood with two transitions on it. We ran into some other guys that lived in another neighborhood, Chevy Chase, and it was like we had just met this whole other crew of people just like us. We were all from DC and we’re all skating. They had a ramp, called the Monster, it was 12′ tall with three or four transitions on it and it was only 4′ wide. That was a dangerous ramp. Anyway, we decided to form a team. Most people think teams are about getting paid or getting something for free, but for us it was more like the Wanderers, it was more like a gang. We wanted to formalize our relationship and form a collective. We were a team in the truest sense of the word. The only thing keeping it together was our desire to be together not because we were getting paid to do it. Unofficially we were Team Sahara, so we got these black and yellow jerseys with nothing written on them and started going to contests.

Where were the contests?
Out in the suburbs. There were no contests in DC. It was all flatland stuff. Henry was a freestyle guy, I did slalom. I sucked, but I did it. It was slalom or freestyle. Sometimes there’d be a downhill contest, but there was no ramp contest, nobody could figure out how you could be judged on that. Freestyle was like ice-skating and slalom was like skiing. Slalom was simple, you just had to not blow your gate and get across the line first. Freestyle was judging. I think Henry was pretty good, he got first or second a couple of times. A couple of our guys were pretty decent, but most of our guys just went to hang out and make the scene.

What did people think of you guys?
They were freaked out by us because we were from DC. Most were suburban kids and they were scared of kids from DC. And since we weren’t sponsored by anyone, they really didn’t understand it. They thought there should be a surf shop or someone sponsoring us. We just put our own money together and bought our own t-shirts and put it together. We were influenced by Dogtown then. They had a crew beyond their team. They were all connected on some kind of deeper level. We decided that’s where we were at.

Were you inspired by the Dogtown guys to skate pools?
You gotta remember on the East Coast, it’s not easy to skate pools. In the summer they’re full and in the winter they’re iced and it’s cold outside, and there were just not that many around, not like LA. The first pool we skated was a little kidney shaped pool at this apartment building.

Who was with you?
Henry and John Hargadon. John Hargadon was my best friend, he designed the Team Sahara logos.

Where did you come up with the name Team Sahara ?
It was a word play. DC is hot. It’s extremely hot here in the summers, like a desert, even though it’s more like a swamp. And at the time, skaters that were good were referred to as hot, so we were so hot we were Team ‘Sahara’. It had double meaning. It was corny, but somebody said Team Sahara and it seemed innocuous enough, no one really gave a fuck. We made our own boards for awhile. It was called DC Skates; they were so flawed.

When was that?
’77 or ’78. I made one downhill board, with a narrow front and back and wide hourglass shape in the middle. It was four feet long and I crashed like hell on that thing. But the first pool, that kidney, had a sandpaper finish so if you fell it would take your skin right off. There was another pool, a country club pool with a cool diving bell. It was a great pool. If you hit it just right there was 10′ of straight vert. But you had to crawl through the fence and go at 2AM and there was ice and water in the bottom of the bowl. If someone went in, you had to drag them out and get them somewhere warm immediately or they’d get hypothermia. We had to drag guys with broken arms out under the fence. Then, we had our own little skatepark in Georgetown. We just called it the Cell Block. It was an abandoned police station with a parking lot. We just started building ramps there and no one ever said anything to us, so we just kept building. I think we had one ramp that was 15′ wide and 12′ high.

And the cops didn’t care?
No, I was surprised. Georgetown is a super wealthy neighborhood and they can be kind of fussy, but no one ever said anything to us. For us, we loved skating and we loved building ramps. We loved the production of it all. At night we’d be like, ‘we need to procure some wood’. We’d hit a construction site and get some wood and at 3AM, we’d have four people carrying sheets of plywood on their skateboards, hustling down the street. It became central to our existence. We’d check certain pools everyday to see if they were empty. One day we walked and skated something like ten miles to the Pentagon to skate this this v-shaped wall above this highway. It was kind of sketchy but cool to skate. But if you fell, your board dropped off 20 feet. We also skated a bank along the side of the canal, and if you fell your board went right into the water. We had a Zephyr that fell in and we found three other skateboards dredging for it with a stick wrapped in barbwire, but never found the Zephyr. It’s probably still in there. Then another park opened up in Alexandria, it had a nice pool and reservoir in it. Then in ’78, Henry and I decided to go to California. I was 16 and he was 17. We got on a bus and went across the country. We first got to Northern California and went to the Winchester park.

Did you see any pros there?
No, but when we were in L.A. we went to the Hester Series Contest at Big O and saw everyone. And we went to Upland and skated the pipe there. That was the first pipe I’d ever seen. Basically, we just skated and listened to Ted Nugent. You know a lot of people consider skateboarding a dumb thing to do. But to me skateboarding made me reassess everything I did. If it was raining, I was bummed, because I couldn’t skate. If I was looking at a street, I’d think that’d be a great ride, I’d be checking the sidewalks to see how many cracks it had. If I saw a curb, or a drainage ditch, I’d stop the car to go back and see if it was something skateable. All I was looking for was lines, all the time. I think skateboarding is a way for people to reassess and redefine everything around them. So, for me it was the perfect segue into punk rock because to me punk rock was like reassessing and redefining everything around you. It was like looking as what’s given, looking at if it can be used, how it can be used and whether it’s any damn good to begin with.

FOR THE REST OF THE STORY, ORDER ISSUE #50 BY CLICKING HERE…